"The Births, Marriages, Promotions, and Deaths, which have happened since this Book was in the Press, are all carefully set down in the Addenda..."

Link to the Encyclopedia : Portable Directories

Here is shewn the Rise and Nature of Arms, and all the chief and necessary Rules for attaining a true and perfect Knowledge in that noble Science, which (with no small Labour and Pains) are methodically digested into Parts, illustrated with proper Examples from twenty Copper Plates, all blazon'd; and to them are many References, with Significations, which make the Rules so full, exact, and easy, that any Person may underhfand them, and be able to blazon a Coat of the greatest Difficulty; the only Care being in observing the Terms given to Things born, and the Manner of their Position and Situation, in the Shield; and whether they are proper, natural, or artificial, together .with their different Tinctures, Furs, and accidental Forms, by Partition or Repartition Lines.

I am very senfible, that a Work of this Nature, in which so many different Persons, Families, &c. are more or less concerned, must expose the Author to Variety of Censures; and yet I am in Hopes it will meet with Approbation: For though every Reader will have his own Sentiments, yet they may allow me to say, (and that without Vanity) that none has ever done the like upon this Subject, so perfect and instructive, and in so small a Compass; for Brevity being  most excellent Help to the Memory, I have therefore avoided tedious Impertinences, which many Books are swell'd with; and if I have done any Gentleman Injustice, which is far from my Intention, I shall be ready, upon better Information, to amend the Error in the next Impression, and shall be very thankful to any Person that will give me further Light in those Matters.

As to the Arms of the Peers, I have engraved them as commonly born on their Coaches, but not impal'd with their Ladies, by Reason such Impalements may often lead People into Errors; for 'when a Lady dies, who is not an Heiress, &c. her Arms are no longer used by her Husband or Children ; and as the Arms of Heiresses are diversly marshal'd by the Heralds, so to them I refer the Persons concerned, it being their Business and not mine.

Some indeed have pretended to give compleat Atchievements, and yet there are very few (if any) that are so; nor is there any Certainty of Marshalling a complete Coat, but by the Heralds, because several may be omitted, and others wrong placed.

It is also an Error to surround Arms (engrav'd with the Garter, or the Order of the Thistle, because those Honours don't always descend to the next Heir, (as is instanced in the late Duke of Richmond, the Earl of Oxford, and the Earl of Tankerville.) But that such Honours may not be wanting to the Persons so dignify'd, I have added them to their other Titles, with the Places from whence all their Titles are taken.

If any should find Fault, that the Arms are not placed in regular Order, I answer, that if they had, they could not have been continued so; because a Title becoming extinct, (as that of the late Earl of Forfar) all the following Earls are advanced higher, which cannot be done in their Arms, by reason there are two Coats in each Page. But in the Historical Part, all the Peers (in their Degrees) are placed according to the Seniority of their Creations, and their Titles and Arms are found at one View in the Index.

The Births, Marriages, Promotions, and Deaths, which have happened since this Book was in the Press, are all carefully set down in the Addenda; and the Errors which have escap'd the Press, the Reader may at his Leirure rectify by the Errata.

To conclude: What was farther requisite for accomplishing this Work, besides History and the Publick Records, was personal Information, which I had from several Noble and Worthy Families treated of in this Essay, to whom, and others who have favoured me with their assistance, I take this Opportunity to return my Thanks. And as I have not fatter'd, so I hope I have not disobliged any; for I have industriously avoided Reflections; and I dare be answerable, that this Book is more usefull and less erroneous than any Thing of the like Kind extant; no Pains being spared which might conduce to make it correct; therefore I hope 'twill find the more candid Construction from the Ingenuos Perusers : And to such as may dislike it, I shall address my self only with an Apology borrow'd from Horace.

Text taken from Francis Nichols, The British compendium: or, rudiments of honour. Containing the origin of the Scots, and succession of their Kings for above 2000 Years: Also the titles, Descents, Marriages, Intermarriages, Issue, Posts, and Seats of all the Scottish nobility, with their Robes, and Arms, exactly Engrav'd on So Copper Plates. Likewise, the institution, Creation, and Investiture, of all Degrees of peerage , and of several Orders of knighthood, viz. the Garter, Thistle, Baronet, and Knight-Batchelor: And lastly of Esquires and Gentlemen. To which is added, the antiquity of arms, and an introduction to heraldry, with above 600 Examples, for attaining a perfect Knowledge in that Science; and to them are subjoined the Atchievements and Regalia made use of at Funerals, with an Account of the Office and Dignity of an Herald. London: printed by C. Meere, and sold by A. Bettesworth in Pater-Noster Row, 1725 [2nd edition], p. iv-viii.

Picture: Frontispiece to Francis Nichols, The British compendium. London: printed by R. Nutt, for A. Bettesworth at the Red Lion in Pater-Noster Row: sold also by G. Strahan and J. Clarke in Cornhill; D. Browne without Temple-Bar; J. Stagg in Westminster-Hall; and J. Jackson in Pall-Mall, 1729 [3rd edition] 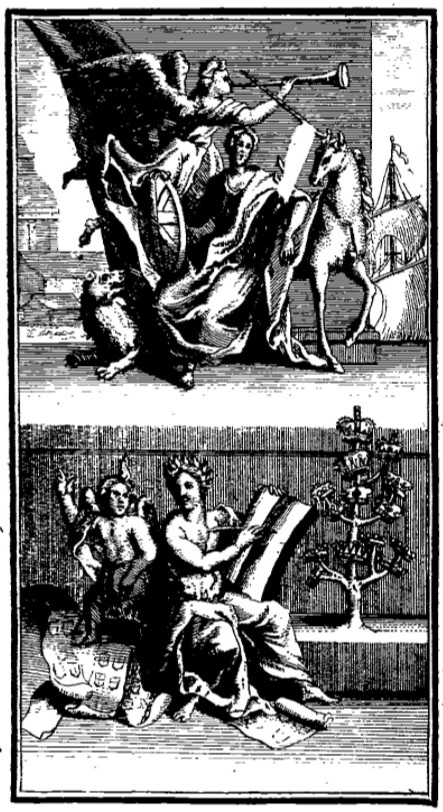