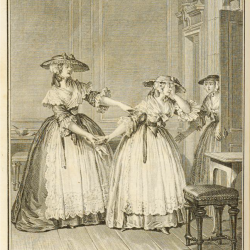 SCHANG Marie-Cécile
French playwrights of the second half of the eighteenth century found inspiration in the themes, characters, and scenarios they borrowed from British theatre, and more largely from British sensibility. The advent of drama and dramatic comedy testifies to the importance of pathos and spectacle during this time. This type of theatre encouraged spectators to identify with the characters and their passions. Sociability thus operated on two levels—on stage, and in the audience. It also fuelled the debate on Franco-British relations.