"It is a misfortune, that society should be esteemed dull and insipid without the assistance of the bottle to enliven it: so that a man cannot entirely refrain from his glass, if he keeps any company at all. " (The Connoisseur no. 82, 21 Aug. 1755)

All these to know, is safety to the youth.

Though the following letter was originally written for the instrution of a young gentleman going to the University; yet as it contains several just and sensible reflections, which may be of use to many of my readers, I have willingly complied with the request of my correspondent in making it the enntertainment of to-day.

As you are now going to the University, I would not be thought to pay so ill a compliment to your own natural good sense, as to suppose, that you will not (like many young gentlemen of fortune) in some measure apply yourself to study: otherwise the time you spend there will be entirely lost; for (as Swift very justly remarks) "all ornamental parts of education are better taught in other places." [p. 81]

At the same time I do not mean, that you should commence Pedant, and be continually poring on a book; since that will rather puzzle, than inform the understanding. And though I know many sprightly young gentlemen of lively and quick parts affect to despise it altogether, it will be necessary to learn something of Logic; I mean in the same manner one would learn Fencing--- not to attack others, but to defend one's self. In a word, you will find it a great unhappiness, when you return hither, if you do not bring with you some taste for reading: for a mere country gentleman, who can find no society in books, will have little else to do, besides following his sports, but to fit, as squire of the company, tippling among a parcel of idle wretches, whose understandings are nearly on a level with his dogs and horses.

It has been an established maxim, that the world will always form an opinion of persons according to the company they are known to keep. In the University, as well as in other places, there are people, whom we ought to avoid, as we would the plague: and as it is of the utmost consequence, whether you plunge at once into extravagance and debauchery, or sink gradually into indolence and stupidity, I shall point out [p. 82] some of these pests of society in as few words as possible.

The first person I would caution you against is the wretch that takes delight to turn religion into ridicule: one who employs that speech, which was given him by GOD to celebrate his praise, in questioning his very being. This, as it is impious in itself, is likewise the height of ill-manners. It is hoped, there are but few of them to be met with in a place of sound doctrine and religious education: but wherever they are, they ought to be avoided as much as possible; and if they will force themselves into our company, they should be used with the fame contempt, with which they have the hardiness to treat their Maker. And this, I can assure you, may be done safely: for I never knew any body, who pretended to be above the fear of GOD, but was under the most terrible apprehensions, whenever attacked by man.

The next character, whom I would advise you to shun, is the GAMESTER, in some respects not unlike the former. The gaming-table is his shrine, and fortune his deity; nor does he ever speak or think of any other, unless by way of blasphemy, oaths and curses, when he has had a bad [p. 83] run at cards or dice. He has not the least notion of friendship; but would ruin his own brother, if it might be of any advantage to himself. He, indeed, professes himself your friend; but that is only with a design to draw you in: for his trade is inconsistent with the principles of honour or justice, without which there can be no real friendship. It should, therefore, be the care of every gentleman, not to hold any commerce with such people, whose acquaintance he cannot enjoy, without giving up his estate.

The next person, whom you ought to beware of, is a DRUNKARD; one that takes an unaccountable pleasure in sapping his constitution, and drowning his understanding. He constantly goes senseless to bed, and rises maukish in the morning; nor can he be easy in body or mind, 'till he has renewed his dose, and again put himself beyond the reach of reflection. I would, therefore, entreat you by all means to avoid an habit, which will at once ruin your health, and impair your intellects. It is a misfortune, that society should be esteemed dull and insipid without the assistance of the bottle to enliven it: so that a man cannot entirely refrain from his glass, if he keeps any company at all. But let it be remembered, that in drinking, as well as in talking, we ought [p. 84] always to " keep a watch over the doors of " our lips."

A LOWNGER is a creature, that you will often fee lolling in a coffee-house, or sauntering about the streets, with great calmness, and a most inflexible stupidity in his countenance. He takes as much pains as the Sot, to fly from his own thoughts; and is at length happily arrived at the highest pitch of indolence both in mind and body. He would be as inoffensive, as he is dull, if it were not that his idleness is contagious; for, like the torpedo, he is sure to benumb and take away all sense of feeling from every one, with whom he happens to come in contact.

It were also best to forbear the company of a WRANGLER, or a person of a litigious temper. This sometimes arises, not from any great share of ill-nature, but from a vain pride of shewing one's parts, or skill in argumentation. It is frequently observed of young Academics in particular, that they are very apt impertinently to engage people in a dispute, whether they will or not. But this is contrary to all the rules of good- breeding, and is never practised by any man of sense, that has seen much of the world. I have Sometimes known a person of great sauciness, and [p. 85] volubility of expression, confuted by the Argumentum Baculinum, and both his head and his syllogism broken at the same time.

I need not point out to you the profligate RAKE or the affected COXCOMB, as persons from whose company you can reap no fort of benefit. From the first the good principles, already instilled into you, will doubtless preserve you; and I am sure you have too much real sense, not to despise the absurd fopperies of the latter. Noted LYARS are no less to be avoided, as the common pests of society. They are often of a mischievous disposition, and by their calumnies and false suggestions take a pleasure in setting the most intimate friends at variance. But if they only deal in harmless and improbable lies, their acquaintance must frequently be out of countenance for them; and if we should venture to repeat after them, I am sure it is the way to be out of countenance for ourselves.

But above all I must advise you never to engage, at least not with any degree of violence, in any PARTY. Be not transported by the clamorous jollity of talking patriots beyond the fober dicates of reason and justice; nor let the insinuating voice of corruption tempt you to barter your integrity [p. 86] and peace of mind for the paltry satisfaction of improving your fortune. If you behave with honour and prudence, you will be regarded and courted by all parties; but if otherwise, you will certainly be despised by all. Perhaps indeed, if you should hereafter engage in elections, and spend your own money to support another's cause, the person, in whose interest you are, may shake you by the hand, and swear you are a very honest gentleman:  -- just as butchers treat their bulldogs, who spit in their mouths, clap them on the back and then halloo them on to be toiled and torn by the horns of their antagonist.

After having guarded you against the evil influence of your own sex, I cannot conclude without throwing in a word or two concerning the Ladies. But that I may not be thought unmannerly to the fair, I shall pass over their faults; only hoping, that their excellencies will not tempt you to percipitate a match with one much your inferior in birth and fortune, though "endowed with every accomplishment requisite" to make the marrriage state happy." In these hasty and unequal matches it sometimes happens, that mutual love gives way to mutual reproaches. We may perhaps too late repent of our bargain: and though Repentance be an excellent visiting friend [p. 87] when she reminds us of our past miscarriages, and prescribes rules how to avoid them for the future, yet she is a most troublesome companion, when fixed upon us for life.

Image taken from The Connoisseur. By Mr. Town, Critic and Censor-general. Printed for J. Parsons, No. 21, Paternoster-Row (London), 1793, volume 3. 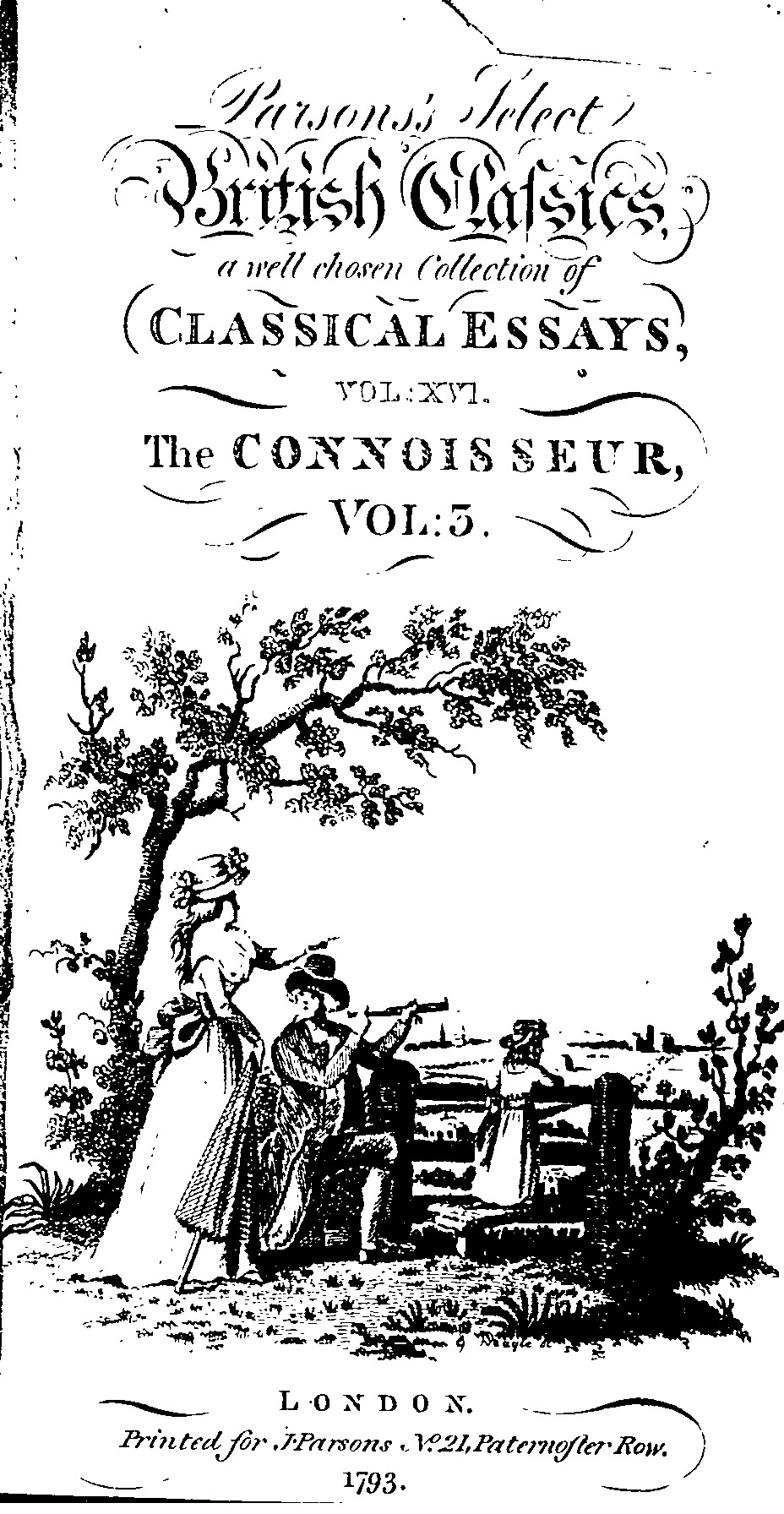