In the eighteenth century, intrigue, libertinage and criminality changed the social norms of politeness and education thereby creating nonconformist social behaviours. An explicit, but certainly not unique, manifestation of these new trends is represented by the city of Venice and its adventurer par excellence, Giacomo Casanova (1725-1798). Ecclesiastic, writer, soldier, spy, alchemist, gambler and diplomat, he was engaged in a network of social relationships which are documented in his Histoire de ma vie (History of My Life), one of the most authentic sources of the customs and norms of European social life during the eighteenth century. Like London, Paris and Vienna, Venice became a centre of social mobility, geographically located as the threshold of the Levant. At the crossroads of Eastern and Western empires, Venice promoted social interactions with Levantine representatives who wisely exploited these social connections to their own advantage. They behaved like shrewd men of business, even like fraudsters, whose “Levantine” attitudes may define a sociability of intrigue. A number of impostors, spies, merchants, sometimes also men of culture, thus contributed to redesigning the sociability of the eighteenth century. By transgressing social norms, they aimed to express their own political activism and socio-cultural views, and to display their eccentric manners.

Such dissident behaviours deeply affected British sociability whose gentleman ideal often remained difficult to reach. Liberty, individualism and eccentricity as embodied by Casanova became new social values subverting the function of some eighteenth-century taverns, coffeehouses and clubs. By mastering the arts of discourse, seduction, and disguise in Italian coffeehouses and elsewhere in Europe, we may wonder how Casanova and other Levantine agents influenced traditional spaces, forms and models of sociability. Wealthy young aristocrats, inspired by Italian fashion and style, were instrumental in making these subversive and deviant behaviours socially acceptable. Their conduct at times compromised official relationships and may have jeopardized social and political stability. The “Levantine” sociabilities eventually fostered encounters between the private and public spheres, the East and the West, and between different social classes.

This conference will encourage discussions and exchanges between international scholars on how national models of sociability and traditional Enlightenment values may have been affected and reconfigured by the Levantine practices of intrigue, libertinage and criminality. Through the multiple facets of Casanova (trickster, libertine, social climber, gambler, political agent …) and his European travels and networks, this conference will also address the circulation of knowledge and fashions between Europe and the East and the evolution of sociability thanks to various media: commerce, diplomacy, travel, letter-writing, translation, leisure and other sociable practices.

This interdisciplinary conference is organized by the Department of Modern Languages, Literatures and Cultures, "G. d’Annunzio” University (Chieti-Pescara, Italy), in collaboration with the GIS Sociabilités and as part of the scientific events of the EU project DIGITENS.

We welcome submissions in Italian, English or French from researchers in different fields (history, history of art, literature, cultural studies, urban studies, sociology, philosophy ...), working on the period 1650-1850. Proposals for 20-minute papers or panels of three speakers are welcome.

- an abstract of no more than 500 characters (spaces included).

- For panel proposals, please also include a title and a 500-character abstract and a short biography for each speaker and contact details for one speaker on the panel.

Stefanovska Malina (ed.), Casanova in the Enlightenment: From the Margins to the Centre [s.l.] (Toronto, University of Toronto Press, 2021). 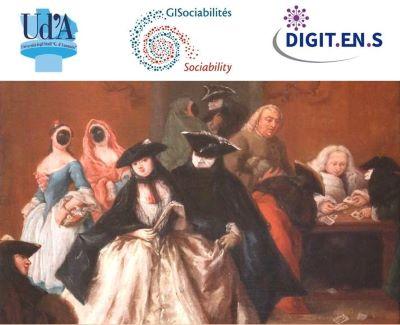 Before Suffrage: Women, Politics and Society in Europe 1789-1850