The Rules of the Game in the Early Modern Period

« All play has its rules. They determine what 'holds' in the temporary world circumscribed by play ». These words, written by the distinguished game theorist Johan Huizinga, encapsulate the principles which govern this specific yet universal human activity. Games cannot exist outside the framework of the rules and the principles underlying them. The player who trespasses against the rules breaks the world of the game, abolishes its very possibility. These rules define, literally, a world, be it the imaginary worlds of children playing with dolls or those of adults engaged in role-play. This world is circumscribed in time and space, it is a « temporary » world, to borrow the term from Huizinga. In the last two chapters of his classic work, the author of Humo Ludens offers a historical perspective. He marks for instance the presence of an undeniably playful spirit in Renaissance and humanism, and identifies in baroque culture a particular playfulness in inspiration and creation. This historical analysis, however, remains incomplete.

Taking the notion of rule(s) as a starting point, this conference will offer an analysis of playfulness and of the spirit of games in the early modern period. Its goal is to understand the place of games in the cultures of the time, possibly even to challenge Huizinga's postulate that games constitute the very foundation of culture. The conference will focus mostly on the British Isles, while welcoming comparisons with other European countries. The period under scrutiny is necessarily broad (1600-1800) in order to allow for an analysis of the variety of practices and expressions of games and play, but also to test whether the period, often defined through arbitrary temporal limits, does in fact have an internal, organic unity.

This conference will focus on texts and ludic practices, game manuals and cultural representations, which might range from literature (from Shakespeare to the romantic period) to the visual arts or to material culture. Theory and practice will both be discussed and contextualised historically. No type of games will be excluded: children's games, gambling, punning and word games, board games, social games, and even physical activities and sports. The materiality of games will also be examined, as will the practical approaches to games.

The conference will investigate the relationships between games and social identities, thus illuminating the tensions between different conceptions of social status: on the one hand, a conception based on the idea of a natural order, where each individual's status is either determined by its natural place in the chain of beings or decided through practice, usage and privileges, or, on the other hand, a conception where status might be acquired through risk-taking, audacity and transgression. Documents articulating the rules of the social game (order of precedence, politeness, appropriate uses of sociable spaces, etc.) may also help assess the tensions between social distinction and the breaking of social rules (in the context of games on identity, unexpected behaviours, etc).

In focusing on rules, the conference will illuminate the aesthetic, moral, philosophical, social and legal dimensions of games.

The aim of the conference will not be to define limits to the practice of games and play, but to suggest approaches to the question of the rules of the game(s), which might include:

- Games, rules and the law.

- The rules of games and their representations in literature.

- The rules of games and theatre.

- Literature as a game.

- Historical approaches to rules and games.

- Texts spelling out the rules of the social game, conduct books.

- Games and gambling as dangers or threats (to the social order).

- The philosophy of games.

- Games, rules and their visual representations.

- Connections between rules and the material form of games.

- Rules governing the places and the sociability of games and gambling (salons, tripots and gaming-houses, coffee-houses, etc).

- The rules of the game and devious practices (cheating, corruption, etc).

- The dangers of play, games and gambling.

This conference is the final event of a research programme organised around a regular seminar on games in the early modern period. A selection of papers will be published.

The languages of the conference will be both French and English. 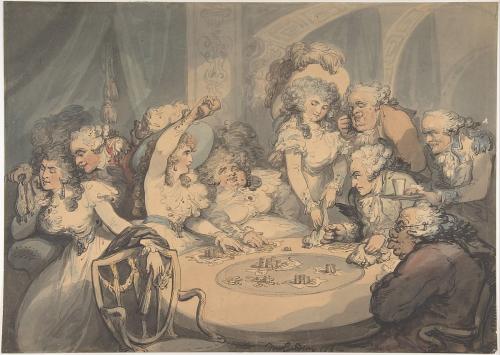