Before Suffrage: Women, Politics and Society in Europe 1789-1850

The workshop will examine a series of issues about the forms of activity in which women engaged that they themselves could see as having political dimensions or that sought to influence the direction taken by the communities and society of which they were a part.  We see 1800-1850 as an especially important period in large part because of the extensive disruption in Europe following the French Revolution and the Napoleonic period of rule, and because of the extent to which that revolution triggered other popular rebellions and insurrections against the status quo across Europe.   Instability often bred opportunity.  For example, the period sees the emergence of new organizational forms, including, in some countries, women’s societies; in other countries, divided by war, women took an active part in forms of resistance and their organization. At the same time, what often started from very local beginnings, over time contributed to the emergence of a lexicon of popular politics and political ideas that were increasingly shared across European states – with liberalism, socialism, communism and conservatism emerging as organizing ideologies in the period, and with questions about the role and place of women in the political system being opened for examination and challenge.

Our interest is in exploring the range of parts that women in Europe played in the growing contestation and confrontation that developed in this period and that was increasingly coupled with political demands for reform or for recognition of various forms.  At what points, in what ways, with what ends and aspirations did women act and with what awareness of breaking with customary expectations and traditional roles?   How did their activity diverge from or further develop existing patterns of sociability and networks of association for women.  What challenges and opportunities did war and revolution open to women; and for those states that avoided war, especially civil war, what place were women able to carve for themselves in the changing politics of their worlds?  How did they reflect on their own activity, did they identify it as ‘political’ and in what ways (and what did they take that to mean), and how did others see it and respond to it.  How should we see it?

The literature on women’s sociability has been dominated by relatively elite social groups and has focused heavily on the early modern period and the eighteenth century.  This workshop moves questions of women’s sociability into the emergence of forms of popular protest and organization, to ask how far the tools and concepts of earlier studies might be deployed in a more turbulent period and across a very much wider social and geographical world.  As a European political lexicon and set of movements comes into formation, it is important to reflect on the variety of roles that women were able to carve for themselves in this new contentious politics.

Thursday 15 September
Introduction by Mark Philp and Anne Verjus: the problem of politicisation 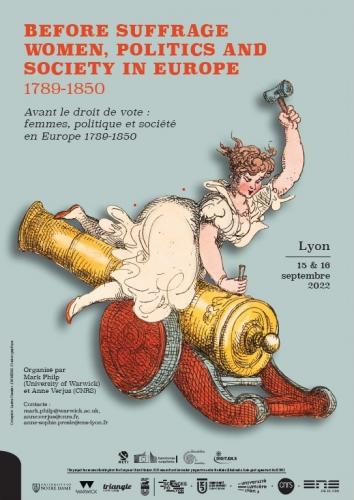