We had a pleasant conversation about the manners of the rich; avarice, inordinate desires, and the effeminacy, unnaturalness, and unworthy objects of education. The moonlight lay upon the hills like snow.

Tuesday, 30th September.—Charles Lloyd dined with us. We walked homewards with him after dinner. It rained very hard. Rydale was extremely wild, and we had a fine walk. We sate quietly and comfortably by the fire. I wrote the last sheet of Notes and Preface. Went to bed at twelve o'clock.

Wednesday, 1st October.—A fine morning, a showery night. The lake still in the morning; in the forenoon flashing light from the beams of the sun, as it was ruffled by the wind. We corrected the last sheet.

Thursday, 2nd October.—A very rainy morning. We walked after dinner to observe the torrents. I followed Wm. to Rydale. We afterwards went to Butterlip How. The Black Quarter looked marshy, and the general prospect was cold, but the force was very grand. The lichens are now coming out afresh. I carried home a collection in the afternoon. We had a pleasant conversation about the manners of the rich; avarice, inordinate desires, and the effeminacy, unnaturalness, and unworthy objects of education. The moonlight lay upon the hills like snow.

Friday, 3rd October.—Very rainy all the morning. Wm. walked to Ambleside after dinner. I went with him part of the way. He talked much about the object of his essay for the second volume of "L. B." ... Amos Cottle's death in the Morning Post.

N.B.—When William and I returned from accompanying Jones, we met an old man almost double. He had on a coat, thrown over his shoulders, above his waistcoat and coat. Under this he carried a bundle, and had an apron on and a night-cap. His face was interesting. He had dark eyes and a long nose. John, who afterwards met him at Wytheburn, took him for a Jew. He was of Scotch parents, but had been born in the army. He had had a wife, and "she was a good woman, and it pleased God to bless us with ten children." All these were dead but one, of whom he had not heard for many years, a sailor. His trade was to gather leeches, but now leeches were scarce, and he had not strength for it. He lived by begging, and was making his way to Carlisle, where he should buy a few godly books to sell. He said leeches were very scarce, partly owing to this dry season, but many years they have been scarce. He supposed it owing to their being much sought after, that they did not breed fast, and were of slow growth. Leeches were formerly 2s. 6d. per 100; they are now 30s. He had been hurt in driving a cart, his leg broken, his body driven over, his skull fractured. He felt no pain till he recovered from his first insensibility. It was then late in the evening, when the light was just going away.

Saturday, 4th October 1800.—A very rainy, or rather showery and gusty, morning; for often the sun shines. Thomas Ashburner could not go to Keswick. Read a part of Lamb's Play. The language is often very beautiful, but too imitative in particular phrases, words, etc. The characters, except Margaret, unintelligible, and, except Margaret's, do not show themselves in action. Coleridge came in while we were at dinner, very wet. We talked till twelve o'clock. He had sate up all the night before, writing essays for the newspaper.... Exceedingly delighted with the second part of Christabel.

Sunday Morning, 5th October.—Coleridge read Christabel a second time; we had increasing pleasure. A delicious morning. Wm. and I were employed all the morning in writing an addition to the Preface. Wm. went to bed, very ill after working after dinner. Coleridge and I walked to Ambleside after dark with the letter. Returned to tea at 9 o'clock. Wm. still in bed, and very ill. Silver How in both lakes.

Monday.—A rainy day. Coleridge intending to go, but did not go off. We walked after dinner to Rydale. After tea read The Pedlar. Determined not to print Christabel with the L. B.

Tuesday.—Coleridge went off at eleven o'clock. I went as far as Mr. Simpson's. Returned with Mary.

Wednesday.—Frequent threatening of showers. Received a £5 note from Montagu. Wm. walked to Rydale. I copied a part of The Beggars in the morning.... A very mild moonlight night. Glow-worms everywhere.

Image: The Travellers' Breakfast by Edward Villiers Rippingille (1824), showing  various famous figures of the day, such as William and Dorothy Wordsworth and Samuel Taylor Coleridge. The Elton Collection. (Acquired in 1981 with assistance from the V&A Purchase Fund and The National Heritage Memorial Fund). 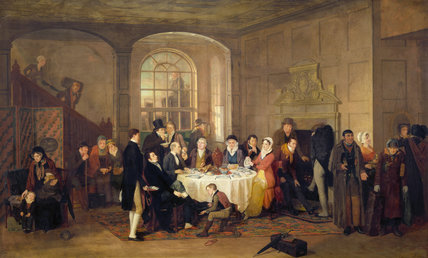