"The simplicity of the entertainment had, probably, its full share in the incitement to its participation. A request to or from the master of the house, was the sole ticket of entrance. And the urbanity of the Doctor upon these occasions, with the warmth of his praise to excellence, and the candour of his indulgence to failure, made his reception of his visitors dispense a pleasure so unconstrained, so varied, so good-humoured, that his concerts were most sought as a favour by those whose presence did them the most honour."

In the private narrative of an historian of the musical art, it may not be improper to insert some account of the concerts, which he occasionally gave to invited friends and acquaintances at his own house; as they biographically mark his style of life, and the consideration in which he was held by the musical world.

The company was always small, as were the apartments in which it was received; but always select, as the name, fame, and travels of the Doctor, by allowing him a choice of guests, enabled him to limit admission to real lovers of music.

He had never any formal band; though it is probable that there was hardly a musician in England who, if called upon, would have refused his services. But they were not requisite to allure those whom the Doctor wished to please or oblige; and a crowd in a private apartment he thought as inimical to harmony as to conversation.

It was, primarily, to gratify Mr. Crisp that, while yet in Poland street, he had begun these little musical assemblages; which, in different forms, and [Pg 10]with different parties, he continued, or renewed, through life.

The simplicity of the entertainment had, probably, its full share in the incitement to its participation. A request to or from the master of the house, was the sole ticket of entrance. And the urbanity of the Doctor upon these occasions, with the warmth of his praise to excellence, and the candour of his indulgence to failure, made his reception of his visitors dispense a pleasure so unconstrained, so varied, so good-humoured, that his concerts were most sought as a favour by those whose presence did them the most honour.

To style them, however, concerts, may be conferring on them a dignity to which they had not any pretension. There was no bill of fare: there were no engaged subalterns, either to double, or aid, or contrast, with the principals. The performances were promiscuous; and simply such as suited the varying humours and desires of the company; a part of which were always assistants as well as auditors.

Some details of these harmonical coteries, which were written at the moment by this memorialist to Mr. Crisp, will be selected from amongst [Pg 11]those which contain characteristic traits of persons of celebrity; as they may more pointedly display their cast and nature, than any merely descriptive reminiscences.

No apology will be pleaded for the careless manner in which these accounts are recorded; Mr. Crisp, as may have been observed in the narrations that have been copied relative to Mr. Bruce, prohibited all form or study in his epistolary intercourse with his young correspondent.

“Let me now try, my dear Mr. Crisp, if I cannot have the pleasure to make you dolorously repent your inexorability to coming to town. We have had such sweet music!—But let me begin with the company, according to your orders.

“They all arrived early, and staid the whole evening.

“The Baroness, his wife; a sweet woman, indeed; young, pretty, accomplished, and graceful. She is reckoned the finest dilletante performer on the piano-forte in Europe.

“I might be contented, you will perhaps say, to have given her this precedence in England and in Denmark; i.e. in her own country and in our’s: but Europe sounds more noble!

“The Honourable Miss Phipps, who came with her, or rather, I believe, was brought by her, for they are great friends; and Miss Phipps had already been with us in Queen-square. Miss Phipps is a daughter of Lord Mulgrave, and sister to the famous Polar captain. She seems full of spirit and taste.

“Sir James and Lady Lake; Sir Thomas Clarges; Mrs. and Miss Ord; and a good many others, agreeable enough, though too tedious to mention, having nothing either striking or odd in them. But the pride of the evening, as neither you, my dear Mr. Crisp, nor Mr. Twining, could be with us, was Mr. HARRIS, of Salisbury, author of the three treatises on Poetry, Music, and Painting; Philosophical Arrangements; Hermes, &c. He brought with him Mrs. Harris, and his second daughter, Miss Louisa, a distinguished [Pg 13] lady-musician. Miss Harris, the eldest, a cultivated and high-bred character, is, I believe, with her brother, our minister at Petersburgh.

“Hettina, Mr. Burney, and our noble selves, bring up the rear.

“There was a great deal of conversation previous to the music. But as the party was too large for a general chatterment, every body that had not courage to stroll about and please themselves, was obliged to take up with their next neighbour. What think you, then, of my good fortune, when I tell you I happened to sit by Mr. Harris? and that that so happening, joined to my being at home,—however otherwise insignificant,—gave me the intrepidity to abandon my yea and nay responses, when he was so good as to try whether I could make any other. His looks, indeed, are so full of benignity, as well as of meaning and understanding; and his manners have a suavity so gentle, so encouraging, that, notwithstanding his high name as an author, all fear from his renown was wholly whisked away by delight in his discourse and his countenance. [Pg 14]

“My father was in excellent spirits, and walked about from one to another, giving pleasure to all whom he addressed.

“As we had no violins, basses, flutes, &c., we were forced to cut short the formality of any overture, and to commence by the harp. Mr. Jones had a very sweet instrument, with new pedals, constructed by Merlin. He plays very well, and with very neat execution.

“Mr. Burney, then, at the request of the Baroness de Deiden, went to the harpsichord, where he fired away with his usual genius. He first played a Concerto of Schobert’s; and then, as the Baroness would not let him rise, another of my father’s.

“When Mr. Burney had received the compliments of the nobility and gentry, my father solicited the Baroness to take his place.

“‘O no!’ she cried, ‘I cannot hear of such a thing! It is out of the question! It would be a figurante to dance a pas seul after Mademoiselle Heinel.’

“However, her animated friend, Miss Phipps, joined so earnestly with my father in entreaty, that, as the Baron looked strongly his sanction to their wishes, she was prevailed upon to yield; which she [Pg 15]did most gracefully; and she then played a difficult lesson of Schobert’s remarkably well, with as much meaning as execution. She is, besides, so modest, so unassuming, and so pretty, that she was the general object of admiration.

“When my father went to thank her, she said she had never been so frightened before in her life.

“My father then begged another German composition from her, which he had heard her play at Lord Mulgrave’s. She was going, most obligingly, to comply, when the Baron, in a half whisper, and pointing to my sister Burney, said; ‘Après, ma chère!’

“The Baroness, with a pleased smile, most willingly made way; and your Hettina, unaffectedly, though not quite unfluttered, took her seat; and to avoid any air of emulation, with great propriety began with a slow movement, as the Baroness had played a piece of execution.

“For this purpose, she chose your favourite bit of Echard; and I never heard her play it better, if so well. Merlin’s new pedals made it exquisite; [Pg 16]and the expression, feeling, and taste with which she performed it, raised a general murmur of applause.

“Mr. Harris inquired eagerly the name of the composer. Every body seemed to be struck, nay enchanted: and charmed into such silence of attention, that if a pin had dropt, it would have caused a universal start.

“I should be ashamed not to give you a more noble metaphor, or simile, or comparison, than a pin; only I know how cheap you hold all attempts at fine writing; and that you will like my poor simple pin, just as well as if I had stunned you with a cannon ball.

“Miss Louisa Harris then consented to vary the entertainment by singing. She was accompanied by Mr. Harris, whose soul seems all music, though he has made his pen amass so many other subjects into the bargain. She has very little voice, either for sound or compass; yet, which is wonderful, she gave us all extreme pleasure; for she sings in so high a style, with such pure taste, such native feeling, and such acquired knowledge of music, that there is not one fine voice in a hundred I could listen to with equal satisfaction. She gave us an unpublished air of Sacchini’s, introduced by some noble recitative [Pg 17]of that delicious composer.

“She declared, however, she should have been less frightened to have sung at a theatre, than to such an audience. But she was prevailed with to give us, afterwards, a sweet flowing rondeau of Rauzzini’s, from his opera of Piramis and Thisbe. She is extremely unaffected and agreeable.

“Then followed what my father called the great gun of the evening, Müthel’s duet for two harpsichords; which my father thinks the noblest composition of its kind in the world.

“Mr. Burney and the Hettina now came off with flying colours indeed; nothing could exceed the general approbation. Mr. Harris was in an ecstacy that played over all his fine features; Sir James Lake, who is taciturn and cold, was surprised even into loquacity in its praise; Lady Lake, more prone to be pleased, was delighted to rapture; the fine physiognomy of Miss Phipps, was lighted up to an animation quite enlivening to behold; and the sweet Baroness de Deiden, repeatedly protested she had never been at so singularly agreeable a concert before.

“She would not listen to any entreaty, however, [Pg 18]to play again; and all instrumental music was voted to be out of the question for that night. Miss Louisa Harris then, with great good breeding, as well as good nature, was won by a general call to give us a finale, in a fine bravura air of Sacchini’s, which she sung extremely well, though under evident and real affright.

“There was then a good deal of chat, very gay and pleasing; after which the company went away, in all appearance, uncommonly gratified: and we who remained at home, were, in all reality, the same.

“But how we wished for our dear Mr. Crisp! Do pray, now, leave your gout to itself, and come to our next music meeting. Or if it needs must cling to you, and come also, who knows but that music, which has

“‘Charms to sooth the savage breast,
To soften rocks, and bend a knotted oak—’

may have charms also, To soften Gout, and Unbend Knotted Fingers?” 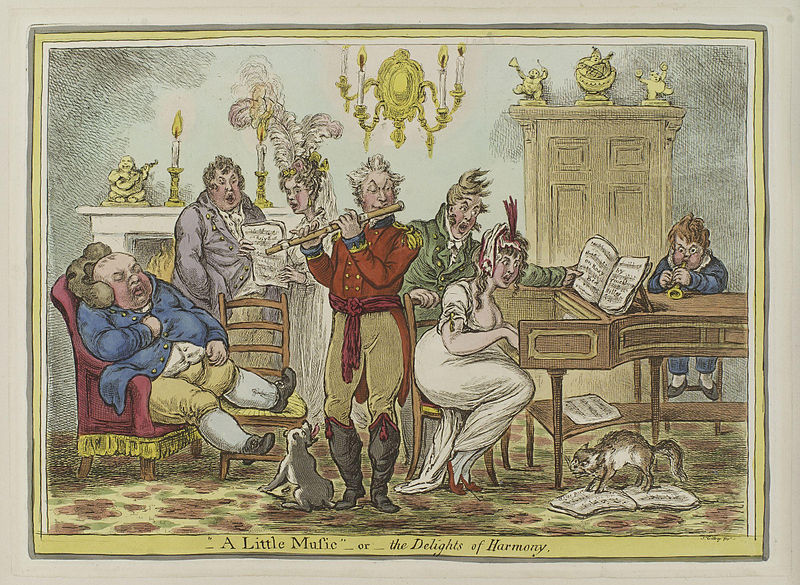