Edmund Burke, Reflections on the Revolution in France (1790)

I hope we shall never be so totally lost to all sense of the duties imposed upon us by the law of social union, as, upon any pretest of public service, to confiscate the goods of a single unoffending citizen. Who but a tyrant (a name expressive of everything which can vitiate and degrade human nature) could think of seizing on the property of men, unaccused, unheard, untried, by whole descriptions, by hundreds and thousands together?

The English people are satisfied, that to the great the consolations of religion are as necessary as its instructions. They, too, are among the unhappy. They feel personal pain and domestic sorrow. In these they have no privilege, but are subject to pay their full contingent to the contributions levied on mortality. They want this sovereign balm under their gnawing cares and anxieties, which, being less conversant about the limited wants of animal life, range without limit, and are diversified by infinite combinations in the wild and unbounded regions of imagination. Some charitable dole is wanting to these, our often very unhappy brethren, to fill the gloomy void that reigns in minds which have nothing on earth to hope or fear; something to relieve in the killing languor and over-labored lassitude of those who have nothing to do; something to excite an appetite to existence in the palled satiety which attends on all pleasures which may be bought, where Nature is not left to her own process, where even desire is anticipated, and therefore fruition defeated by meditated schemes and contrivances of delight, and no interval, no obstacle, is interposed between the wish and the accomplishment.

The people of England know how little influence the teachers of religion are likely to have with the wealthy and powerful of long standing, and how much less with the newly fortunate, if they appear in a manner no way assorted to those with whom they must associate, and over whom they must even exercise, in some cases, something like an authority. What must they think of that body of teachers, if they see it in no part above the establishment of their domestic servants? If the poverty were voluntary, there might be some difference. Strong instances of self-denial operate powerfully on our minds; and a man who has no wants has obtained great freedom and firmness, and even dignity. But as the mass of any description of men are but men, and their poverty cannot be voluntary, that disrespect which attends upon all lay poverty will not depart from the ecclesiastical. Our provident Constitution has therefore taken care that those who are to instruct presumptuous ignorance, those who are to be censors over insolent vice, should neither incur their contempt nor live upon their alms; nor will it tempt the rich to a neglect of the true medicine of their minds. For these reasons, whilst we provide first for the poor, and with a parental solicitude, we have not relegated religion (like something we were ashamed to show) to obscure municipalities or rustic villages. No! we will have her to exalt her mitred front in courts and parliaments. We will have her mixed throughout the whole mass of life, and blended with all the classes of society. The people of England will show to the haughty potentates of the world, and to their talking sophisters, that a free, a generous, an informed nation honors the high magistrates of its Church; that it will not suffer the insolence of wealth and titles, or any other species of proud pretension, to look down with scorn upon what they look up to with reverence, nor presume to trample on that acquired personal nobility which they intend always to be, and which often is, the fruit, not the reward, (for what can be the reward?) of learning, piety, and virtue. They can see, without pain or grudging, an archbishop precede a duke. They can see a bishop of Durham or a bishop of Winchester in possession of ten thousand pounds a year, and cannot conceive why it is in worse hands than estates to the like amount in the hands of this earl or that squire; although it may be true that so many dogs and horses are not kept by the former, and fed with the victuals which ought to nourish the children of the people. It is true, the whole Church revenue is not always employed, and to every shilling, in charity; nor perhaps ought it; but something is generally so employed. It is better to cherish virtue and humanity, by leaving much to free will, even with some loss to the object, than to attempt to make men mere machines and instruments of a political benevolence. The world on the whole will gain by a liberty without which virtue cannot exist.

When once the commonwealth has established the estates of the Church as property, it can consistently hear nothing of the more or the less. Too much and too little are treason against property. What evil can arise from the quantity in any hand, whilst the supreme authority has the full, sovereign superintendence over this, as over any property, to prevent every species of abuse,—and whenever it notably deviates, to give to it a direction agreeable to the purposes of its institution?

In England most of us conceive that it is envy and malignity towards those who are often the beginners of their own fortune, and not a love of the self-denial and mortification of the ancient Church, that makes some look askance at the distinctions and honors and revenues which, taken from no person, are set apart for virtue. The ears of the people of England are distinguishing. They hear these men speak broad. Their tongue betrays them. Their language is in the patois of fraud, in the cant and gibberish of hypocrisy. The people of England must think so, when these praters affect to carry back the clergy to that primitive evangelic poverty which in the spirit ought always to exist in them, (and in us, too, however we may like it,) but in the thing must be varied, when the relation of that body to the state is altered,—when manners, when modes of life, when indeed the whole order of human affairs, has undergone a total revolution. We shall believe those reformers to be then honest enthusiasts, not, as now we think them, cheats and deceivers, when we see them throwing their own goods into common, and submitting their own persons to the austere discipline of the early Church.

With these ideas rooted in their minds, the Commons of Great Britain, in the national emergencies, will never seek their resource from the confiscation of the estates of the Church and poor. Sacrilege and proscription are not among the ways and means of our Committee of Supply. The Jews in Change Alley have not yet dared to hint their hopes of a mortgage on the revenues belonging to the see of Canterbury. I am not afraid that I shall be disavowed, when I assure you that there is not one public man in this kingdom, whom you wish to quote,—no, not one, of any party or description,—who does not reprobate the dishonest, perfidious, and cruel confiscation which the National Assembly has been compelled to make of that property which it was their first duty to protect.

It is with the exultation of a little national pride I tell you that those amongst us who have wished to pledge the societies of Paris in the cup of their abominations have been disappointed. The robbery of your Church has proved a security to the possessions of ours. It has roused the people. They see with horror and alarm that enormous and shameless act of proscription. It has opened, and will more and more open, their eyes upon the selfish enlargement of mind and the narrow liberality of sentiment of insidious men, which, commencing in close hypocrisy and fraud, have ended in open violence and rapine. At home we behold similar beginnings. We are on our guard against similar conclusions.

I hope we shall never be so totally lost to all sense of the duties imposed upon us by the law of social union, as, upon any pretest of public service, to confiscate the goods of a single unoffending citizen. Who but a tyrant (a name expressive of everything which can vitiate and degrade human nature) could think of seizing on the property of men, unaccused, unheard, untried, by whole descriptions, by hundreds and thousands together? Who that had not lost every trace of humanity could think of casting down men of exalted rank and sacred function, some of them of an age to call at once for reverence and compassion,—of casting them down from the highest situation in the commonwealth, wherein they were maintained by their own landed property, to a state of indigence, depression, and contempt? 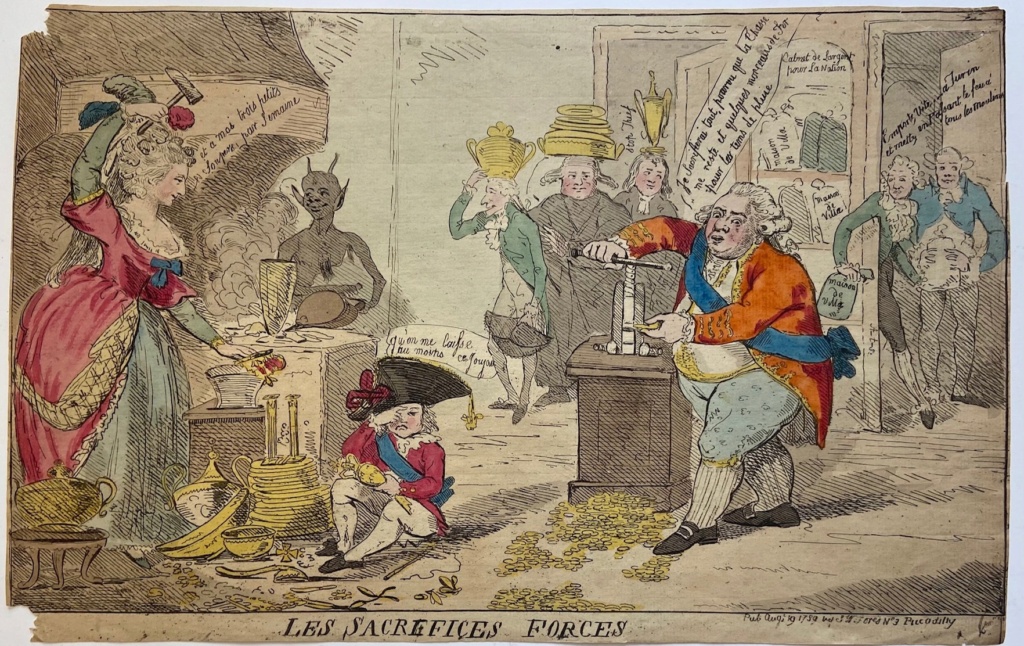