"You are talking of a legal society, where the chief magistrate is always chosen for the public good, which, as we see in all the legal societies of the world, he constantly consults, daily contributing, by his superior skill, to their prosperity, and not sacrificing their good to his own wealth, or pleasure, or humour: but in an illegal society or gang, as this of ours, it is otherwise..."

Chapter fourteen — In Which Our Hero Makes a Speech Well Worthy to Be Celebrated; And the Behaviour of One of the Gang, Perhaps More Unnatural than Any Other Part of this History

There was in the gang a man named Blueskin, one of those merchants who trade in dead oxen, sheep, &c., in short, what the vulgar call a butcher. This gentleman had two qualities of a great man, viz., undaunted courage, and an absolute contempt of those ridiculous distinctions of meum and tuum, which would cause endless disputes did not the law happily decide them by converting both into suum. The common form of exchanging property by trade seemed to him too tedious; he therefore resolved to quit the mercantile profession, and, falling acquainted with some of Mr. Wild's people, he provided himself with arms, and enlisted of the gang; in which he behaved for some time with great decency and order, and submitted to accept such share of the booty with the rest as our hero allotted him.

But this subserviency agreed ill with his temper; for we should have before remembered a third heroic quality, namely, ambition, which was no inconsiderable part of his composition. One day, therefore, having robbed a gentleman at Windsor of a gold watch, which, on its being advertised in the newspapers, with a considerable reward, was demanded of him by Wild, he peremptorily refused to deliver it.

"How, Mr. Blueskin!" says Wild; "you will not deliver the watch?" "No, Mr. Wild," answered he; "I have taken it, and will keep it; or, if I dispose of it, I will dispose of it myself, and keep the money for which I sell it." "Sure," replied Wild, "you have not the assurance to pretend you have any property or right in this watch?" "I am certain," returned Blueskin, "whether I have any right in it or no, you can prove none." "I will undertake," cries the other, "to shew I have an absolute right to it, and that by the laws of our gang, of which I am providentially at the head." "I know not who put you at the head of it," cries Blueskin; "but those who did certainly did it for their own good, that you might conduct them the better in their robberies, inform them of the richest booties, prevent surprizes, pack juries, bribe evidence, and so contribute to their benefit and safety; and not to convert all their labour and hazard to your own benefit and advantage." "You are greatly mistaken, sir," answered Wild; "you are talking of a legal society, where the chief magistrate is always chosen for the public good, which, as we see in all the legal societies of the world, he constantly consults, daily contributing, by his superior skill, to their prosperity, and not sacrificing their good to his own wealth, or pleasure, or humour: but in an illegal society or gang, as this of ours, it is otherwise; for who would be at the head of a gang, unless for his own interest? And without a head, you know, you cannot subsist. Nothing but a head, and obedience to that head, can preserve a gang a moment from destruction. It is absolutely better for you to content yourselves with a moderate reward, and enjoy that in safety at the disposal of your chief, than to engross the whole with the hazard to which you will be liable without his protection. And surely there is none in the whole gang who hath less reason to complain than you; you have tasted of my favours: witness that piece of ribbon you wear in your hat, with which I dubbed you captain. Therefore pray, captain, deliver the watch." "D—n your cajoling," says Blueskin: "do you think I value myself on this bit of ribbon, which I could have bought myself for sixpence, and have worn without your leave? Do you imagine I think myself a captain because you, whom I know not empowered to make one, call me so? The name of captain is but a shadow: the men and the salary are the substance; and I am not to be bubbled with a shadow. I will be called captain no longer, and he who flatters me by that name I shall think affronts me, and I will knock him down, I assure you." "Did ever man talk so unreasonably?" cries Wild. "Are you not respected as a captain by the whole gang since my dubbing you so? But it is the shadow only, it seems; and you will knock a man down for affronting you who calls you captain! Might not a man as reasonably tell a minister of state, Sir, you have given me the shadow only? The ribbon or the bauble that you gave me implies that I have either signalised myself, by some great action, for the benefit and glory of my country, or at least that I am descended from those who have done so. I know myself to be a scoundrel, and so have been those few ancestors I can remember, or have ever heard of. Therefore, I am resolved to knock the first man down who calls me sir or right honourable. But all great and wise men think themselves sufficiently repaid by what procures them honour and precedence in the gang, without enquiring into substance; nay, if a title or a feather be equal to this purpose, they are substance, and not mere shadows. But I have not time to argue with you at present, so give me the watch without any more deliberation." "I am no more a friend to deliberation than yourself," answered Blueskin, "and so I tell you, once for all, by G—I never will give you the watch, no, nor will I ever hereafter surrender any part of my booty. I won it, and I will wear it. Take your pistols yourself, and go out on the highway, and don't lazily think to fatten yourself with the dangers and pains of other people." At which words he departed in a fierce mood, and repaired to the tavern used by the gang, where he had appointed to meet some of his acquaintance, whom he informed of what had passed between him and Wild, and advised them all to follow his example; which they all readily agreed to, and Mr. Wild's d—tion was the universal toast; in drinking bumpers to which they had finished a large bowl of punch, when a constable, with a numerous attendance, and Wild at their head, entered the room and seized on Blueskin, whom his companions, when they saw our hero, did not dare attempt to rescue. The watch was found upon him, which, together with Wild's information, was more than sufficient to commit him to Newgate.

In the evening Wild and the rest of those who had been drinking with Blueskin met at the tavern, where nothing was to be seen but the profoundest submission to their leader. They vilified and abused Blueskin, as much as they had before abused our hero, and now repeated the same toast, only changing the name of Wild into that of Blueskin; all agreeing with Wild that the watch found in his pocket, and which must be a fatal evidence against him, was a just judgment on his disobedience and revolt.

Thus did this great man by a resolute and timely example (for he went directly to the justice when Blueskin left him) quell one of the most dangerous conspiracies which could possibly arise in a gang, and which, had it been permitted one day's growth, would inevitably have ended in his destruction; so much doth it behove all great men to be eternally on their guard, and expeditious in the execution of their purposes; while none but the weak and honest can indulge themselves in remissness or repose.

The Achates, Fireblood, had been present at both these meetings; but, though he had a little too hastily concurred in cursing his friend, and in vowing his perdition, yet now he saw all that scheme dissolved he returned to his integrity, of which he gave an incontestable proof, by informing Wild of the measures which had been concerted against him, in which he said he had pretended to acquiesce, in order the better to betray them; but this, as he afterwards confessed on his deathbed at Tyburn, was only a copy of his countenance; for that he was, at that time, as sincere and hearty in his opposition to Wild as any of his companions.

Our hero received Fireblood's information with a very placid countenance. He said, as the gang had seen their errors, and repented, nothing was more noble than forgiveness. But, though he was pleased modestly to ascribe this to his lenity, it really arose from much more noble and political principles. He considered that it would be dangerous to attempt the punishment of so many; besides, he flattered himself that fear would keep them in order: and indeed Fireblood had told him nothing more than he knew before, viz., that they were all complete prigs, whom he was to govern by their fears, and in whom he was to place no more confidence than was necessary, and to watch them with the utmost caution and circumspection: for a rogue, he wisely said, like gunpowder, must be used with caution; since both are altogether as liable to blow up the party himself who uses them as to execute his mischievous purpose against some other person or animal.

We will now repair to Newgate, it being the place where most of the great men of this history are hastening as fast as possible; and, to confess the truth, it is a castle very far from being an improper or misbecoming habitation for any great man whatever. And as this scene will continue during the residue of our history, we shall open it with a new book, and shall therefore take this opportunity of closing our third.

Taken from Henry Fielding, The History Of The Life Of The Late Mr. Jonathan Wild The Great, in The Works Of Henry Fielding — Volume Ten. With the Author's Preface, and an Introduction by G. H. Maynadier. New York : Thomas Y. Crowell, [1903], book 3, chapter 14. Full book from HATITRUST. 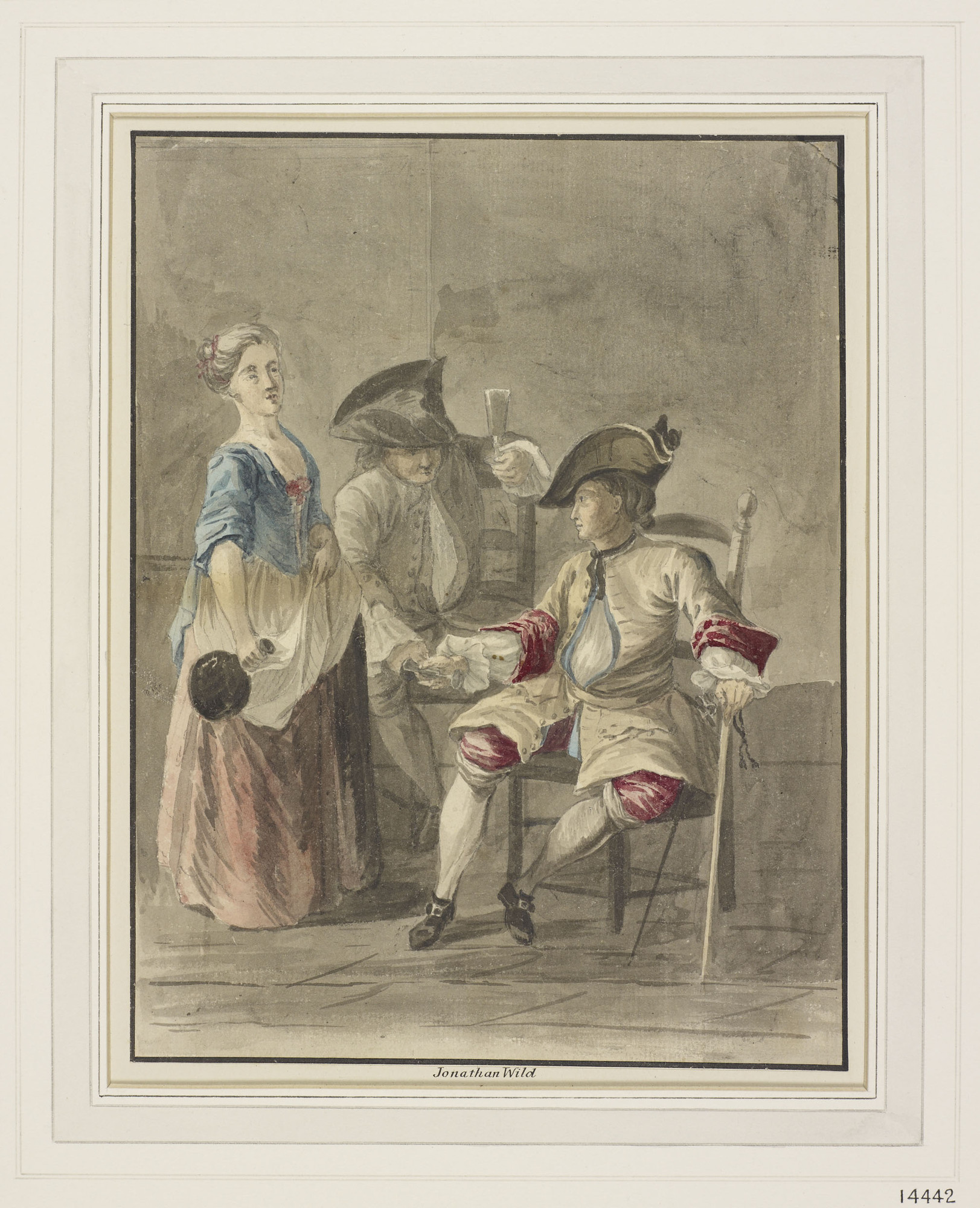