Over the chimney, a conversation, by Reynolds, small life : Richard, second lord Edgcumbe, is drawing at a table in the library at Strawberry-hill; George James Williams is looking over him; George Augustus Selwyn stands on the other fide, with a book in his hand.

You first enter a small gloomy hall, paved with hexagon tyles, and lighted by two narrow windows of painted glass, representing saint John and saint Francis. This hall is united with the staircase, and both are hung with a gothic paper, painted by one Tudor, from the screen of prince Arthur's tomb in the cathedral of Worcester. The balustrade was designed by Mr. Bentley; at every corner is an antelope [one of lord Orford's supporters] holding a shield. In the well of the staircase, by a cord of black, and yellow, hangs a gothic lanthorn of tin japanned, designed by Mr. Bentley, and filled with painted glafs j the door of it has an old pane with the arms of Vere, earl of Oxford.

Turning to the left, through a small passage, on one side of which is a window entirely of painted glass, you enter

The REFECTORY, or GREAT PARLOUR.

It is thirty feet long, twenty wide, and twelve high; hung with paper in imitation of stucco. The chimney-piece was designed by Mr. Bentley: upon it stands a fine Etruscan vase, between two bottles of black and gold porcelaine.

Over the chimney, a conversation, by Reynolds, small life : Richard, second lord Edgcumbe, is drawing at a table in the library at Strawberry-hill; George James Williams is looking over him; George Augustus Selwyn stands on the other fide, with a book in his hand.

On one side of this picture, a head of sir Horace Mann, resident at Florence; painted there by Astley, and highly coloured : he is drest in red velvet.

Opposite to it, his brother Galfridus Mann, in brown; by the fame.

Over against the chimney, a bureau of black japan on it, a clock, supported by a bronze figure of a woman reading: beneath, an Etruscan vase, between two white old china beakers.

The chairs are black, of a gothic pattern, designed by Mr. Bentley and Mr. Walpole. The table of Sicilian jasper, on a black frame designed by Mr. Bentley: upon it, a large punch-bowl and pail of Seve china ; two beakers of old grey porcelaine, veined; two ice-pails of Chelsea china; three silver owls, as ancient castors; and a silver filligree bread-basket. Under it, two Etruscan vases, and a jar of Roman fayence. Over the table hangs a hunting-horn, finely enamelled on one side in colours, on the other in chiaro scuro, with the history of saint Hubert.

Text taken from Horace Walpole, A description of the villa of Horace Walpole, youngest son of Sir Robert Walpole earl of Orford, at Strawberry-hill, near Twickenham : with an inventory of the furniture, pictures, curiosities, &c. Strawberry-hill : Printed by Thomas Kirgate, 1774-[1786], p. 14-15. Transcribed by A. Kerhervé. 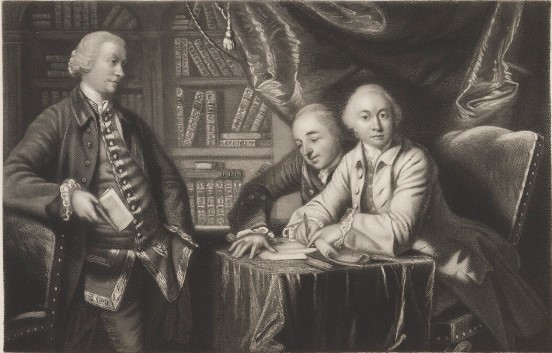