In France, it is common for bald people or those who have bad hair to wear wigs. They even use false hair for beards and moustaches as a disguise.

Sixth Section. On the clothing of the French

It is known in our country that the Frankish head-dress is the hat, that their footwear generally consists of black shoes or mocassins and that they usually dress in black cloth. However, the French, though they usually dress in this manner, do not have a special uniform; everyone dresses as he pleases and as he is allowed by custom.

The dominant feature about their dress is not the ornamentation but the extreme cleanliness. One of their best customs is that they wear a chemise, underpants and a vest underneath their clothes. A wealthy man will change his underwear several times a week. In doing so, they attempt to prevent vermin from breeding and thus all but the very poor are free from fleas or any other such creatures.

French women's clothes are very pretty, but there is a certain immodesty about them especially when they wear their most expensive garments. However, they do not have a lot of jewellery. They wear gilded earrings, gold bracelets, which they put on their forearms and which show from under their sleeves, and a light necklace. As for anklets, these are completely unknown to them. They wear fine fabrics such as silk, calico or light cotton. When it is cold they wear a fur scarf [etole], which they put around their neck, with both ends dangling, like a mi'zar,' almost to their feet. It is also their custom to wear a thin belt on their dresses with a view to making their waists look slim and their haunches full.

Witness the words al-Häjari wrote in his Diwan, though they depart from propriety:

The one who wean a zunndr, if only I were his master so that / might win an embrace from his waist
The priest gives him to drink the rose of his cheek and the Muslims have become his captives
To his merit, if it had not been for the nimbleness of his body my islam would not have digressed before his cruel beatbenness

Another wonderful thing is that, once the belt has been put on, the waist is so slim that one can hold it in both hands. Women also tend to attach a tin rod to the belt, which extends from the belly to their bosom so that their posture is always straight without curves. They are indeed very wily.

One of their habits that cannot be condoned is that, contrary to the wont of Arab women, they do not let their hair hang freely. French women always gather their hair in the middle of their heads and put a comb in it or something like that.

On hot days they tend to uncover parts of their bodies, removing any garments between the head and their breasts - sometimes they even show a bare back. At evening dance parties the ladies’ arms are bare. Yet this is not considered indecent by people of this country. However, they never show their legs and always wear stockings, especially when they go out into the street. In truth, their legs are not exceptional at all and the following words of the poet do not really apply to them:

I have notforgotten him, as begot upfreely showing his leg, as white as a shiny pearl
Do not wonder if in him / found my resurrection
Indeed the resurrection is the day of the discovery of the leg!

In France, it is common for bald people or those who have bad hair to wear wigs. They even use false hair for beards and moustaches as a disguise. This was the custom in the time of the French King Louis XIV since he wore a wig which he took off only when he went to sleep. Today it has survived only among bald people and those with bad hair. The strange thing is that the wearing of wigs has become a fashion in Egypt among women in Cairo. 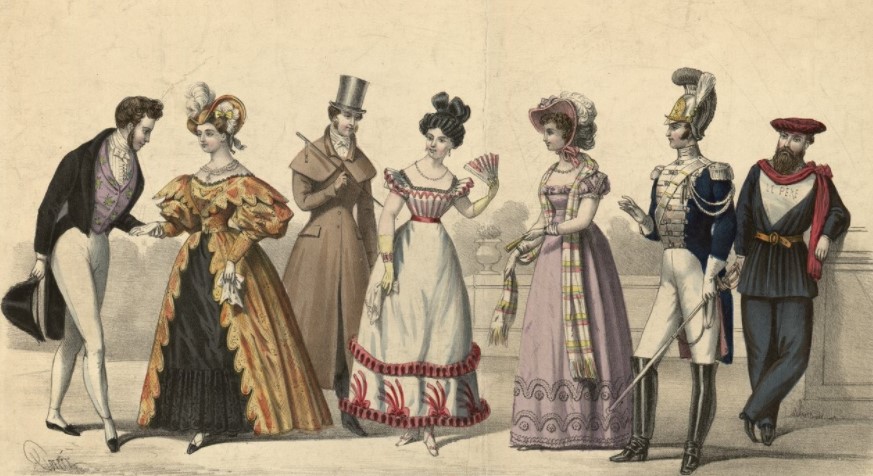