"All that is illustrious in publick life, all that is amiable and endearing in society, all that is elegant in science and in arts, affect him just with the same indifference..."

‘In the multitude of my thoughts within me, thy comforts delight my soul.’ Psalms.

The Hypochondriack is himself at this moment in a state of very dismal depression, so that he cannot be supposed capable of instructing or entertaining his readers. But after keeping them company as a periodical essayist for three years, he considers them as his friends, and trusts that they will treat him with a kindly indulgence. He is encouraged by the compliments which an unknown reader at the London Coffee-house has been pleased to pay him in this Magazine for last month. He may hope that there are many such readers.

Instead of giving this month an essay published formerly, of which I have a few, that after a proper revision I intend to adopt into this series, I have a mind to try what I can write in so wretched a frame of mind ; as there may perhaps be some of my unhappy brethren just as ill as myself, to whom it may be soothing to know that I now write at all.

While endeavouring to think of a subject, that passage in the Psalms, which I have prefixed as a motto to this paper, presented itself to my mind. ‘In the multitude of my thoughts within me, thy comforts delight my soul.’

Language cannot better express uneasy perturbation of spirits than the Psalmist has here done. There is in the idea of multitude, disorder, fluctuation, and tumult ; and whoever has experienced what I now suffer, must feel his [frust]ation justly and strongly described.

Let us select some of those thoughts, the multitude of which confounds and overwhelms the mind of a Hypochondriack.

His opinion of himself is low and desponding. His temporary dejection makes his faculties seem quite feeble. He imagines that every body thinks meanly of him. His fancy roves over the variety of characters whom he knows in the world, and except some very bad ones indeed, they seem all better than his own. He envies the condition of numbers, whom, when in a sound state of mind, he sees to be far inferior to him. He regrets his having ever attempted distinction and excellence in any way, because the effect of his former exertions now serves only to make his insignificance more vexing to him. Nor has he any prospect of more agreeable days when he looks forward. There is a cloud as far as he can perceive, and he supposes it will be charged with thicker vapour, the longer it continues.

He is distracted between indolence and shame. Every kind of labour is irksome to him. Yet he has not resolution to cease from his accustomed talks. Though he reasons within himself that contempt is nothing, the habitual current of his feelings obliges him to shun being despised. He acts therefore like a slave, not animated by inclination but goaded by fear.

Everything appears to him quite different. He repeats from Hamlet,

‘How weary, stale, flat, and unprofitable,
To me seem all the uses of this world.’

He begins actually to believe the strange theory, that nothing exists without the mind, because he is sensible, as he imagines, of a total change in all the objects of his contemplation. What formerly had engaging qualities has them no more. The world is one undistinguished wild.

His distempered fancy darts sudden livid glaring views athwart time and space. He cannot fix his attention upon any one thing, but has transient ideas of a thousand things ; as one sees objects in the short intervals when the wind blows aside flame and smoke.

An extreme degree of irritability makes him liable to be hurt by every thing that approaches him in any respect. He is perpetually upon the fret ; and though he is sensible that this renders him unmanly and pitiful he cannot help shewing it ; and his consciousness that it is observed, exasperates him so, that there is great danger of his being harsh in his behaviour to all around him.

He is either so weakly timid as to be afraid of every thing in which there is a possibility of danger, or he starts into the extremes of rashness and desperation. He ruminates upon all the evils that can happen to man, and wonders that he has ever had a moment’s tranquillity, as he never was nor ever can be secure. The more he thinks the more miserable he grows, and he may adopt the troubled exclamation in one of Dr. Young’s tragedies :

‘Auletes, seize me, force me to my chamber, There chain me down, and guard me from myself.’

Though his reason be entire enough, and he knows that his mind is sick, his gloomy imagination is so powerful that he cannot disentangle himself from its influence, and he is in effect persuaded that its hideous representations of life are true. In all other distresses there is the relief of hope. But it is the peculiar woe of melancholy, that hope hides itself in the dark cloud,

Could the Hypochondriack see any thing great or good or agreeable in the situation of others, he might by sympathy partake of their enjoyment. But his corrosive imagination destroys to his own view all that he contemplates. All that is illustrious in publick life, all that is amiable and endearing in society, all that is elegant in science and in arts, affect him just with the same indifference, and even contempt, as the pursuits of children affect rational men. His fancied elevation and extent of thought prove his bane ; for he is deprived of the aid which his mind might have from sound and firm understandings, as he admits of none such. Even his humanity towards the distressed is apt to be made of no avail. For as he cannot even have the idea of happiness it appears to him immaterial whether they be relieved or not. Finding that his reason is not able to cope with his gloomy imagination, he doubts that he may have been under a delusion when it was cheerful; so that he does not even wish to be happy as formerly, since he cannot wish for what he apprehends is fallacious.

In the multitude of such thoughts as these, when the Hypochondriack is sunk in helpless and hopeless wretchedness, if he has recourse only to his fellow creatures and to objects upon earth – How blessed is the relief which he may have from the divine comforts of religion! from the comforts of GOD, the Father of Spirits, the Creator and Governor of the Universe, whose mercy is over all his other works, and who graciously hears the prayers of the afflicted.

In order to have these comforts, which not only relieve but ‘delight the soul,’ the Hypochondriack must take care to have the principles of our holy religion firmly established in his mind, when it is sound and clear, and by the habitual exercise of piety [to]strengthen it, so as that the flame may live even in the damp and foul vapour of melancholy. Dreadful beyond description is the state of the Hypochondriack who is bewildered in universal scepticism. But when the mind is sick and distressed, and has need of religion that is not the time to acquire it. The understanding is then wavering, and the temper capricious ; and the best arguments may be ineffectual against prejudice.

By religion the Hypochondriack will have his mind fixed upon one invariable object of veneration, will have his troubled thoughts calmed by the consideration that he is here in a state of trial, that to contribute his part in carrying on the plan of providence in this state of being is his duty, and that his sufferings however severe will be found beneficial to him in the other world, as having prepared him for the felicity of the saints above, which by some mysterious constitution, to be afterwards explained, requires in human beings a course of tribulation. And in the mean time he will have celestial emanations imparted to him.

While writing this paper, I have by some gracious influence been insensibly relieved from the distress under which I laboured when I began it. May the same happy change be experienced by any of my readers, in the like affliction, is my sincere prayer.

Text taken from "THE HYPOCHONDRIACK. No. XXXIX" in The London Magazine, or, Gentleman's Monthly Intelligencer,  v. 49 (1780), p. 541-543 [transcription by Noémie Vandenborre, UBO]. Full volume from HATITRUST.

Image: Tea (Picturesque Beauties of Boswell, Part the First) by Thomas Rowlandson (May 15, 1786). The Metropolitan Museum of Art (New-York, USA). 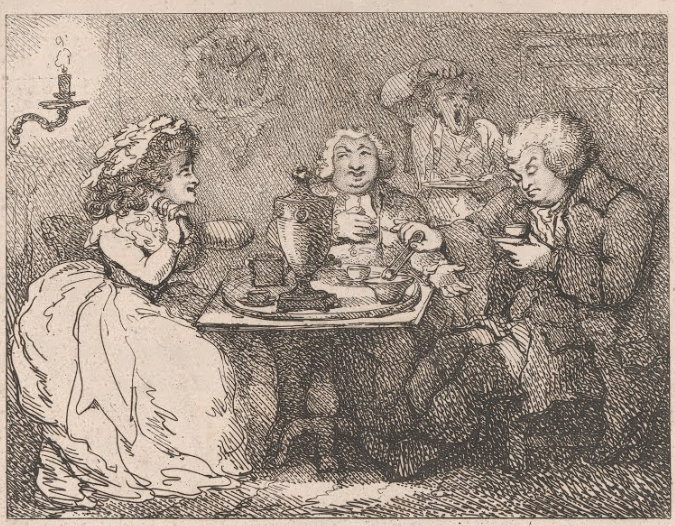