Jonathan Swift, A Description of a City Shower (1711)

Triumphant Tories, and desponding Whigs,
Forget their feuds and join to save their wigs.

Careful observers may foretell the hour
(By sure prognostics) when to dread a shower.
While rain depends, the pensive cat gives o’er
Her frolics, and pursues her tail no more.
Returning home at night you find the sink
Strike your offended sense with double stink.
If you be wise, then go not far to dine,
You spend in coach-hire more than save in wine.
A coming shower your shooting corns presage,
Old aches throb, your hollow tooth will rage:
Sauntering in coffee-house is Dulman seen;
He damns the climate, and complains of spleen.

Meanwhile the South, rising with dabbled wings,
A sable cloud athwart the welkin flings;
That swilled more liquor than it could contain,
And like a drunkard gives it up again.
Brisk Susan whips her linen from the rope,
While the first drizzling shower is borne aslope:
Such is that sprinkling which some careless quean
Flirts on you from her mop, but not so clean:
You fly, invoke the gods: then turning, stop
To rail; she singing, still whirls on her mop.
Nor yet the dust had shunned th’ unequal strife,
But aided by the wind, fought still for life;
And wafted with its foe by violent gust,
‘Twas doubtful which was rain, and which was dust.
Ah! Where must needy poet seek for aid,
When dust and rain at once his coat invade?
Sole coat, where dust cemented by the rain
Erects the nap, and leaves a cloudy stain.

Now in contiguous drops the flood comes down,
Threatening with deluge this devoted town.
To shops in crowds the daggled females fly,
Pretend to cheapen goods, but nothing buy.
The Templer spruce, while every spout’s abroach,
Stays till ’tis fair, yet seems to call a coach.
The tucked-up seamstress walks with hasty strides,
While streams run down her oiled umbrella’s sides.
Here various kinds by various fortunes led,
Commence acquaintance underneath a shed.
Triumphant Tories, and desponding Whigs,
Forget their feuds and join to save their wigs.
Boxed in a chair the beau impatient sits,
While spouts run clattering o’er the roof by fits;
And ever and anon with frightful din
The leather sounds; he trembles from within.
So when Troy chairmen bore the wooden steed,
Pregnant with Greeks, impatient to be freed;
(Those bully Greeks, who, as the moderns do,
50 Instead of paying chairmen, run them through)
Laocoon struck the outside with his spear,
And each imprisoned hero quaked for fear.

Now from all parts the swelling kennels flow,
And bear their trophies with them as they go:
Filths of all hues and odors, seem to tell
What streets they sailed from, by the sight and smell.
They, as each torrent drives with rapid force
From Smithfield, or St. Pulchre’s shape their course;
And in huge confluent join at Snow Hill ridge,
Fall from the conduit prone to Holborn Bridge.
Sweepings from butchers’ stalls, dung, guts, and blood,
Drowned puppies, stinking sprats, all drenched in mud,
Dead cats and turnip tops come tumbling down the flood.

Jonathan Swift, "A Description of a City Shower", Miscellanies in prose and verse. London: printed for John Morphew, near Stationers Hall, 1711, p. 406-410. Full volume at ECCO. 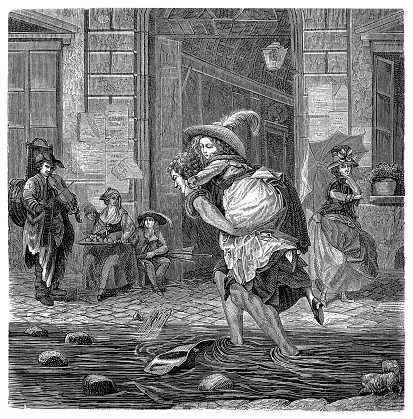