Literary Anecdotes of the Eighteenth Century (1812)

"Mr. Goadby's shop at the Royal Exchange was, for many years, of an evening, the meeting-place of a select party of men of superior abilities, for the purpose of conversation..."

Link to the Encylopedia : Bookshops

Mr. Goadby was also a public-spirited man; never sparing himself or his purse, when properly called upon. In the year 1754, he was one of the warm and active friends of Betty Canning; her story many now living must remember.

Mr. Goadby for many years sent a rich supplyof Bibles, Testaments, and pious books, for the poor at Hadleigh, and the villages around; and subscribed fifty pounds to the Patriotic Fund; he was also, for many years, a subscriber to the Lying-in Charity, and to several Dispensaries; and, by his will, left handsome legacies to the institutions he had subscribed to. Mr. Goadby's shop at the Royal Exchange was, for many years, of an evening, the meeting-place of a select party of men of superior abilities, for the purpose of conversation, -Mr. John Payne, Jate Accountant-general of the Bank, the late Mr. John Ryland, Mr. John Cole, and (the Writer believes), the late Dr. Hawkesworth, with many more sensible men, that improved and enlarged their_mental powers by the communication of ideas. Those meetings had a very different effect upon the members of this friendly circle, to that produced by convivial meetings, where wine and riot preclude sentiment, and destroy reason. The late Dr. Towers was, atthe period of these sentimental meetings, a little lad, under the patronage of Mr. Goadby; being very small, he used to slip into the circle unperceived, listen with great attention to all he heard, and, by treasuring it up in his mind, he then laid the foundation of all his future respectability as a literary man. It will be well for young persons to remember such a circumstance; and to be anxious never to lose an opportunity that offers for enriching their minds, by attending to the conversation of thegood and wise. Mr. Goadby had survived every member of the circle, in which he had for many years enjoyed so much rational satisfaction. How painful is the reflection, that the lot of all persons living to advanced age must be, to spend many of their solitary hours in a retrospect of past comforts, that never, never, can return in this life! What then are the consolations of old age, under all the gloom of solitude, and pressure of infirmity? Nothing short of a well-grounded hope in the prospect of a happy Eternity. The circle they hope to join in a better world, will never be broken in upon by death ; nor will their powers of enjoyment ever decrease.

Text taken from John Nichols, Samuel Bentley and Son Nichols. Literary Anecdotes of the Eighteenth Century: Comprizing Biographical Memoirs of William Bowyer, Printer, F.S.A., And Many of His Learned Friends, an Incidental View of the Progress And Advancement of Literature In This Kingdom During the Last Century, And Biographical Anecdotes of a Considerable Number of Eminent Writers And Ingenious Artists : With a Very Copious Index. Second edition. London: Printed for the author, by Nichols, Son, and Bentley, at Cicero's Head, Red-Lion-Passage, Fleet-Street, 1812-1816, p. 433-434. Full volume from HathiTrust.

Picture: "Shopping at the Temple of the Muses" by Rudolph Ackermann (1809). 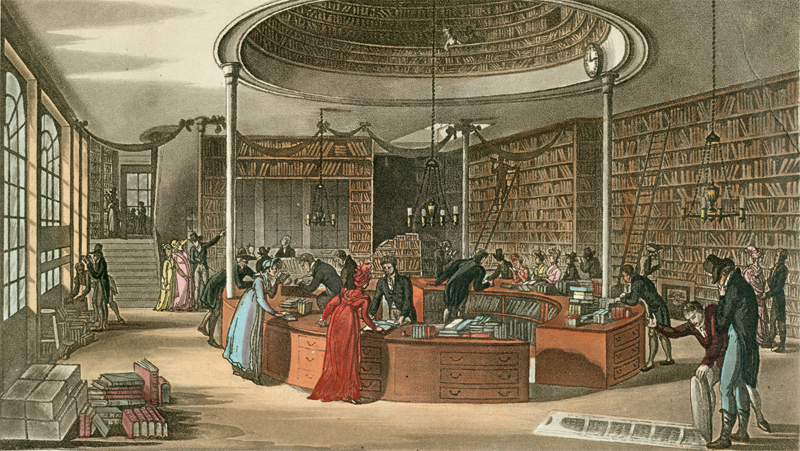