"Having pritty well tir’d our selves with the Frantick Humours and Rambling Ejaculations of the Mad-folks, we took a turn to make some few Remarks upon the Loosness of the Spectators, amongst whom we observ’d abundance of Intriguing; Mistresses we found were to be had of all Ranks, Qualities, Colours, Prices, and Sizes, from the Velvet-Scarf, to the Scotch-plad-petticoat..."

Thus we prattled away our time, till we came in Sight of a Noble Pile of Building, which diverted us from our former discourse, and gave my Friend the Occasion of asking me my Thoughts of this Magnificent Edifice: I told him, i conceiv’d it to be my Lord Mayor’s Palace, for I could not imagine so stately a Structure could be design’d for any Quality inferior; he smill’d at my Innocent Conjecture, and inform’d me this was Bedlam, an Hospital for Mad-folks: In truth, said I, I think they were Mad that Built so costly a Colledge for such a Crack-brain’d Society; adding, It was pitty so fine a Being should not be possessed by such who had a Sense of their Happiness; sure, said I, it was a Mad Age when this was Rais’d, and the chief of the City were in great danger of losing their Senses, so contriv’d it the more Noble for their own Reception; or they would never have flung away so much Money to so foolish a purpose: You must consider, says my Friend, this stands upon the same Foundation as the Monument, and the Fortunes of a great many poor Wretches lies Buried in this Ostentatious Piece of Vanity; and this, like the other, is but a Monument of the Cities Shame and Dishonour, instead of it’s Glory; come let us take a walk in, and view it’s inside.

Accordingly we were admitted in thro’ an Iron-gate, within which sat a Brawny Cerberus, of an Indico-colour, leaning upon a Money-box; we turn’d in thro’ another Iron-Barricado, where we heard such a ratling of Chains, drumming of Doors, Ranting, Hollowing, Singing, and Running, that I could think of nothing but Don Quevedo’s Vision, where the Damn’d broke loose, and put Hell in an Uproar. The first whimsie-headed Wretch, of this Lunatick Family, that we observ’d, was a merry Fellow in a Straw Cap, who was talking to himself aftert his manner, That he had an Army of Eagles at his Command; then claping his hand upon his Head, Swore by his Crown of Moon-shine, he would Battel all the Stars in the Skies but he would have some Clarret: In this interim, came a Gentleman to stare at him with a Red face: No wonder, said his Aereal Majesty, Clarret is so scarce; look there’s a Rogue carry’s more in his Nose than I, that am Prince of the Air, have had in my Belly this Twelvemonth. If you are Prince of the Air, said I, why don’t you command the Man in the Moon to give you some? To which he reply’d, The Man in the Moon’s a sorry Rascal; I sent to him for a dozen Bottles but t’other Day, and he Swore by his Bush, his Cellar had been dry this Sixmonths; but I’ll be even with the Rogue, I expect a Cloud laden with Clarret to be sent me by the Sun every day; and if a Spoonful of Lees would save him from Choaking, the old Drunken Whores-Bird should not have a drop.

We then mov’d on till we found another remarkable Figure worth our observing, who was peeping thro’ his Wicket, eating of Bread and Cheese, talking all the while like a Carrier at his Supper, chewing his Words with his Victuals, all that he Spoke being in praise of Bread and Cheese; Bread was good with Cheese, and Cheese was good with Bread, and Bread and Cheese was good together; and abundance of such Stuff; to which my Friend and I, with others, stood listening; at last he Counterfeits a Sneeze, and shot such a mouthful of Bread and Cheese amongst us, that every Spectator had some share of his kindness, which made us retreat; he calling after us Masters, Masters; some went back to hear what he had to say, and he had provided them a plentiful Bowl of Piss, which he cast very successfully amongst them, crying out in a laugh, I never give Victuals, but I give Drink, and you’re Welcome Gentlemen.

The next unhappy Object amongst this Shatter-brain’d Fraternity, was a Scholar of St. John’s Colledge in Cambridge, who was possess’d with Melancholy, but very inoffensive, and had the Liberty of the Gallery; this was a very Musical Man, which is thought to be one great Occasion of his Distemper: My Friend walk’d up to him, and introduc’d some talk, to divert himself with a few of his Frensical Extravagancies. Another Lunatick in his Intervals, who had the Liberty of ranging the House, catches hold of my School-fellows Arm, and express’d himself after this manner, Do’st thou know, Friend, what thou art doing? Why thou art talking to a Madman, a Fiddling fellow, who had so many Crotchets in his Head, that he crack’d his Brains about his thorow Bases. Prithee, says my Companion, what was the Occasion of Thy Distemper? To which he answer’d, I am under this Confinement for the Noble Sins of Drinking and Whoring; and if thou hast not a care, it will bring thee into the same Condition.

We peep’d into another Room, which smelt as strong of Chamber-lye, as a Bottle of Sal Armoniac, where a fellow was got as hard at work as if he’d been treading Mortar: What is it Friend, said I, thou art taking all this Pains about? He answer’d me thus, still continuing his Action, I am Trampling down Conscience under my Feet, least he should rise up and fly in my Face; Have a care he does not fright thee, for he looks like the Devil; and is as fierce as a Lyon, but that I keep him Muzzled; therefore get thee gones or I will set him upon thee. Then fell a Claping his hands, and cry’d, Halloo, halloo, halloo, halloo, halloo; and thus we left him Raving.

Another was holding-forth with as much Vehemence against Kingly-Government, as a Brother of Commonwealth-Doctrine railes against Plurallity of Livings, I told him he deserv’d to be Hang’d for talking of Treason. Now, says he, You’re a Fool, we Madmen have as much priviledge of Speaking our Minds within these Walls, as an Ignorant Dictator, when he Spews out his Nonsense to the whole Parish. Prithee come and live here, and you may talk what you will, and nobody will call you to Question for it: Truth is persecuted every where abroad, and flies hither for Sanctuary, where she sits as safe as a Knave in a Church, or a Whore in a Nunnery. I can use her as I please, and that’s more than you dare do. I can tell Great Men such Bold Truths as they don’t love to hear, without the danger of a Whipping-post; and that you can’t do: For if you ever see a Madman Hang’d for Speaking Truth, or a Lawyer whip’d for Lying, I’ll be bound to prove my Cap a Wheel-barrow.

We then took a walk into the Womens Appartment, to see what whimsical Figaries their wandring Fancies would have them to entertain us with all.

The first that we look’d in upon, stood stradling with her Back against the Wall, crying, Come, John come; you’re Master’s gone to Change. I believe, the poor Fool’s afraid of Forfeiting his Indentures. Did you ever see the like? Why, sure you wont serve your Mistress so, John, will you? Hark, hark, run you Rogue; your Master’s come back to Shop. Yes, you shall have a Wife, you old Rogue, with Seven Hundred Pounds, and be Married Six Years, and not get a Child. Fy for shame, out upon’t ! A Husband for a Woman ! A Husband for the Devil. Hang you, Rot you, Sink you, Confound you. And thus at last she run Raving on, to the highest degree of Madness.

Another was talking very merrily, at her Peeping-hole, to a crow’d of Auditors, most of them young Wenches. A foolish Girl, amongst the rest, ask’d the Madwoman how old she was? who reply’d, she was old enough to have Hair where the other had none. Which made the Young Creature betake herself to her heels to avoid the Mockery of the rest. In this interim came by a Beauish Blade, with his Wig very much Powder’d, Look, look, cries Bess of Bedlam, yonder goes a Prodigal Puppy, an Extravagant Rascal, that has got more Flower in his Wig, than my Poor Mother has in her Meal-Tub to make a Pudding with-all.

The next poor Object that happen’d under our Observation, was, a Meager old Grey-headed Wretch, who look’d as wild as an Angry Cat, and all her Tone was, The Wind is – blow Devil, blow; the Wind is – Blow, Devil, blow; a Seaman who was a staring at her, and listening to what she said, must needs be inquisitive how the Wind sat, asking her, Where is the Wind, Mother? She hastily replying, The Wind’s in mine A–s; Blow Fool, blow: Being so pleas’d she had sold him a Bargain, that she fell into an Extravagant fit of Laughter, in which we left her.

Having pritty well tir’d our selves with the Frantick Humours and Rambling Ejaculations of the Mad-folks, we took a turn to make some few Remarks upon the Loosness of the Spectators, amongst whom we observ’d abundance of Intriguing; Mistresses we found were to be had of all Ranks, Qualities, Colours, Prices, and Sizes, from the Velvet-Scarf, to the Scotch-plad-petticoat: Commodities of all sorts went off, for their wanted not a suitable Jack to every Jill. Every fresh comer was soon engaged in an Amour; tho they came in Single, they went out by Paires; ‘tis a new Whet-stone’s Park, now the old ones Plough’d up, where a Sportsman at any Hour in the Day may meet with Game for his purpose; ‘tis a Conveniency to London as the Long Cellar to Amsterdam; where any Stranger may Purchase a Purge for his Reins, at a small expence, and may have a Pox by chance flung into the bargain; All that I can say of it, is this, ‘Tis an Alms-house for Madmen, a Showing-Room for Whores, a sure Market for Leachers, and a dry Walk for Loiterers.

Edward Ward, The London-Spy Compleat. In eighteen parts. Printed for, and by J. How, and sold by Eliphal Jaye, at the sign of the candlestick, the lower-end of Cheapside (London), 1700, part 3, p. 10-13 (January 1699). Transcription by Noémie Vandenborre (UBO). Full text by ECCO. 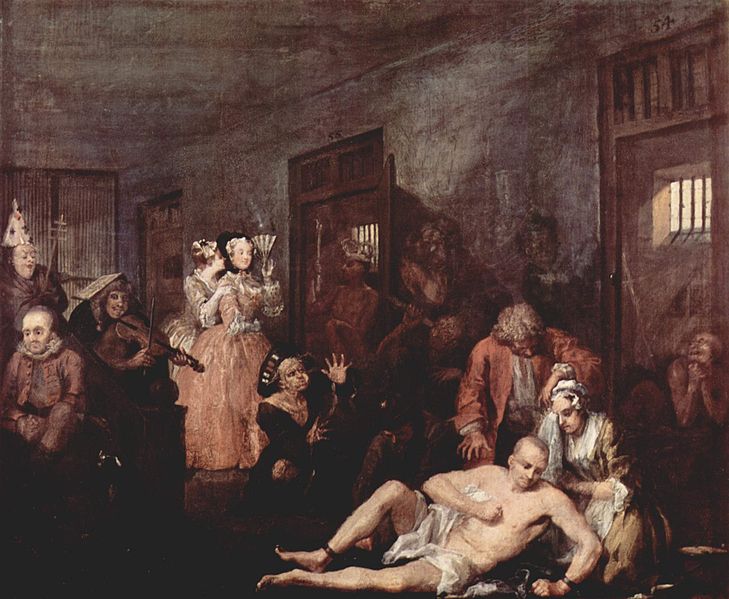