Ned Ward on the Kit-Cat Club

... from thence call'd themselves The Kit-Cat-Club: And Bocai, in respect that he was Donor of the Feast, and promoter of this New Pudding-Pye Establishment, had the Honour to be chosen Chair-Man of the Society

Of the KIT CAT Club.

Links to the Encyclopedia:  Kit-Cat Club ...

This Ingenious Society of Apollo's Sons, who, for many Years, have been the Grand Monopolizers of those scandalous Commodities in this Fighting Age, viz. Wit and Poetry, had first the honour to be founded by an Amphibeous Mortal, Chief Merchant to the Muses; and in these Times of Piracy both Bookseller and Printer, who having, many Years since, conceived a wonderful Kindness for one of the greasie Fraternity, then Living at the end of Bell-Court in Grays-Inn-Lane, where, finding out the Knack of humouring his Neighbour Bocai's Pallat, had, by his Culinary Qualifications, so highly advanc'd himself in the Favour of his Good Friend, that, thro' his Advice and Assistance, he Remov'd out of Grays-Inn-Lane to keep a Pudding-Pye-Shop near the Fountain-Tavern in the Stand, encourag'd by an assurance that Bocai and his Friends would come every Week to Storm the Crusty Walls of his Mutton-Pies, and mike a Consumption of his Custards. About this time Bocai, who had always a sharp Eye towards his own Interest, having riggl'd himself into the Company of a parcel of Poetical young Sprigs, who had just Wean’d themselves of their Mother University, and by their prolifick Parts and promising Endowments, had made themselves the Favourites of the late bountiful Mecaenas, who had generously promis'd to be an Indulging Father to the Rhiming Brotherhood, who had United themselves in Friendship, but were as yet unprovided for; so that now, between their Youth and the narrowness of their Fortunes, being just in the Zenith of their Poettick Fury, Bocai had a fair prospect of Feathering his Nest, by his new profitable Chaps, who having more Wit than Experience, put but a slender value, as yet, upon their Maiden Performances. Besides, the happy Acquaintance of these Sons of Parnassus gave him a lucky Opportunity of promoting the Interest of his beloved Engineer, so skill'd in the Fortification of Cheese-Cakes, Pies, and Custards; so that Bocai, to Ingratiate himself with his New Set of Authors, Invited them to a Collation of Oven-Trumpery at his Friend's House, where they were nobly Entertain'd with as curious a Batch of Pastry Delicacies as ever were seen at the winding up of a Lord-Mayor's Feast upon the Day of his Triumphs, that there was not a Mathematical Figure in all Euclid's Elements, but what was presented to the Table in Bak'd Wares, whose Cavities were fill'd with fine Eatable, Varieties, fit for Gods or Poets.  This procur'd the Cook such a mighty Reputation among his new Rhiming Customers, that they thought it a scandal to the Muses that so Heavenly a Banquet should go untag'd with Poetry, where the Ornamental Folds of every lushious Cheese-Cake, and the artful Walls of every Golden Custard, deserv'd to be Immortaliz'd; they could therefore scarce demolish the imbellish'd Covering of a Pidgeon-Pie without a Distick; or break thro' the sundry Tunicks of a Puff-Paste Apple-Tart, without a smart Epigram upon the glorious Occasion. Bocai wisely observing the good effects of this Paistry Entertainment; and finding that Pies to Poets were as agreeable Food, as Ambrosia to the Gods, very cunningly propos'd their Weekly Meeting at the same Place; and that himself would be oblig'd to continue the like Feast every Club-Day, provided they would do him the Honour to let him have the Refusal of all their Juvenile Products, which generous Proposal was very readily agreed to by the whole Poettick Clan: And the Cook's Name being Christopher, for brevity call'd Kit, and his Sign being the Cat and Fiddle, they very merrily deriv'd a quaint Denomination from Puss and her Master, and from thence call'd themselves The Kit-Cat-Club: And Bocai, in respect that he was Donor of the Feast, and promoter of this New Pudding-Pye Establishment, had the Honour to be chosen Chair-Man of the Society; to which presiding Authority, as most believe, he owes the Stateliness of his Brow and the Haughtiness of his Temper. When Bocai had thus far been Successful in his new molition, he had now nothing else to do but to lay fresh Foundations for his young Artificers to Build upon, and never to come empty without some Project in his Head that might have a probable tendency to his own Profit. Now, every Week, the Listening Town was Charm'd with some wonderful Off-spring of their Teeming-Noddles: And the Fame of Kit-Cat began to extend itself to the utmost Limits of our learned Metropolis: Not a Court Countess could Compassionate her Lover with the tenderest of her Favours: The Young Buxom Wife of an Old Impotent Alderman be beholden to a Courtier to make her sensible of the difference between a strenuous Sportsman and a crazy Fumbler; a Gouty Lord select a Jilting-Mistress from that Fruitful Nursery the Theatre; or a Noted Beau be Cheated of a Hundred Guineas for a Second-Hand Maiden-head, but presently the pleasing Adventure was most notably handl'd by the Kit-Cat Bards, and Sung down to Posterity, nor indeed could a great Man dye whose Memory was worth an Elegy, but they would find a Way to add ten Guineas to his Funeral Charges; or a Man of Honour marry a celebrated Beauty, or a great Fortune, but they would draw him in with a charming Epithalamium to pay them Socket-Money.

Text taken from Ned Ward, The Secret History of Clubs: particularly the Kit-Cat, Beef-Stake, Vertuosos, Quacks, Knights of the Golden-Fleece, Florists, Beaus, &c. with their original: and the characters of the Most Noted Members thereof (London, 1709), pages 360-364 [extract from Chapter XXXI, pages 360-377]. 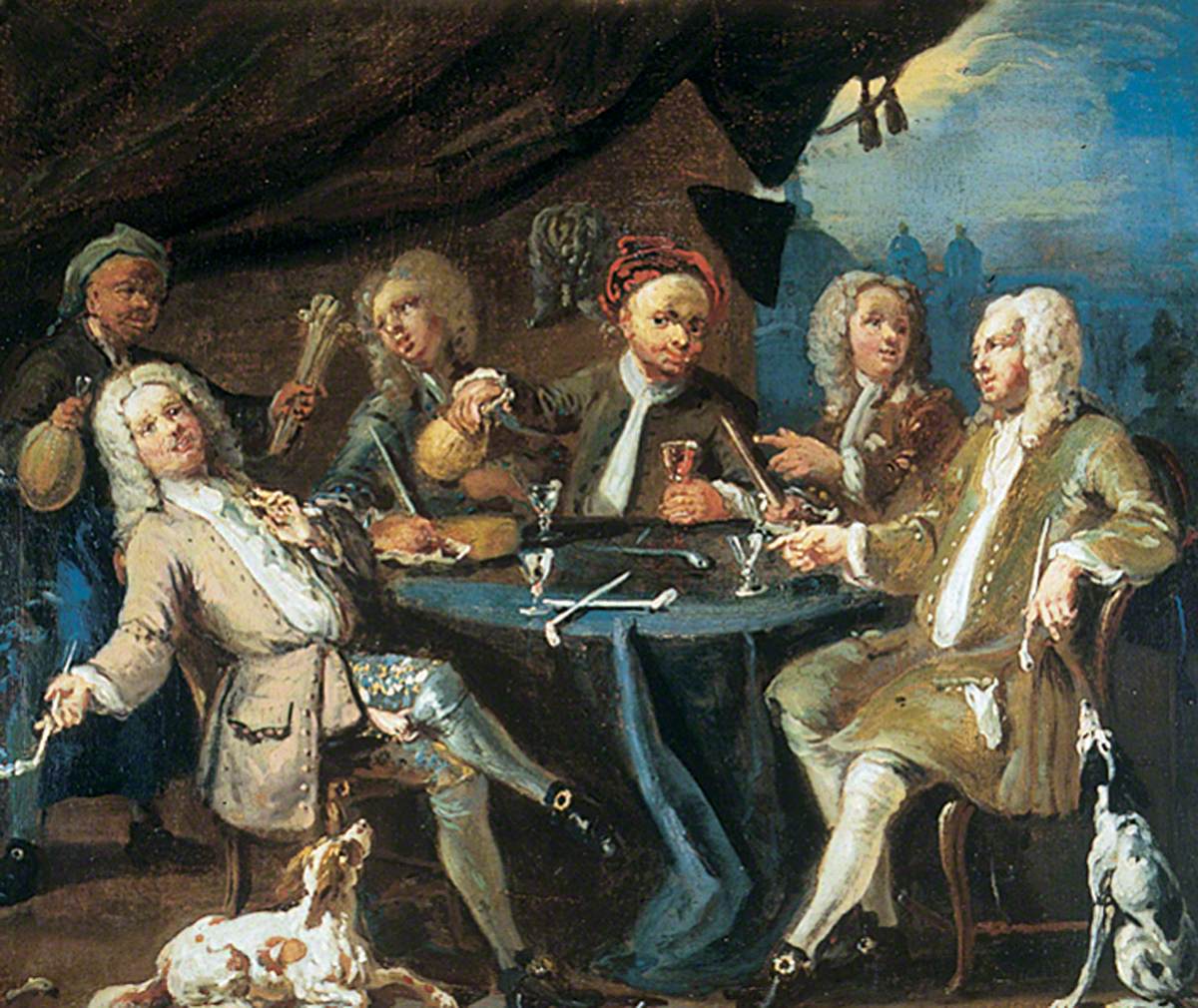