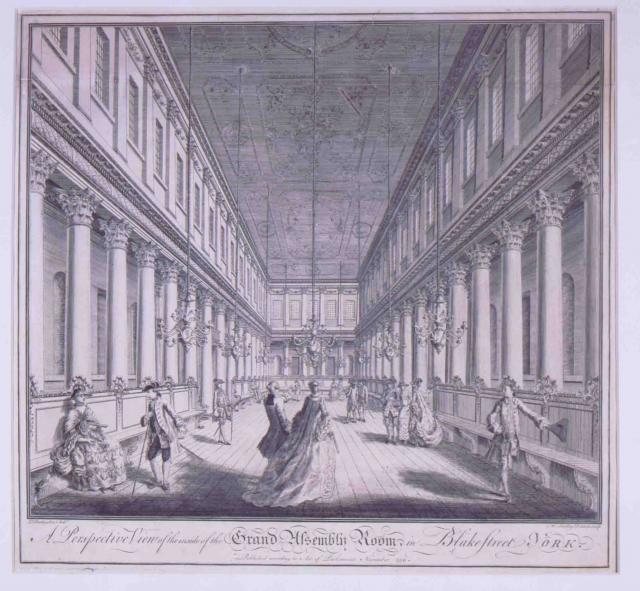 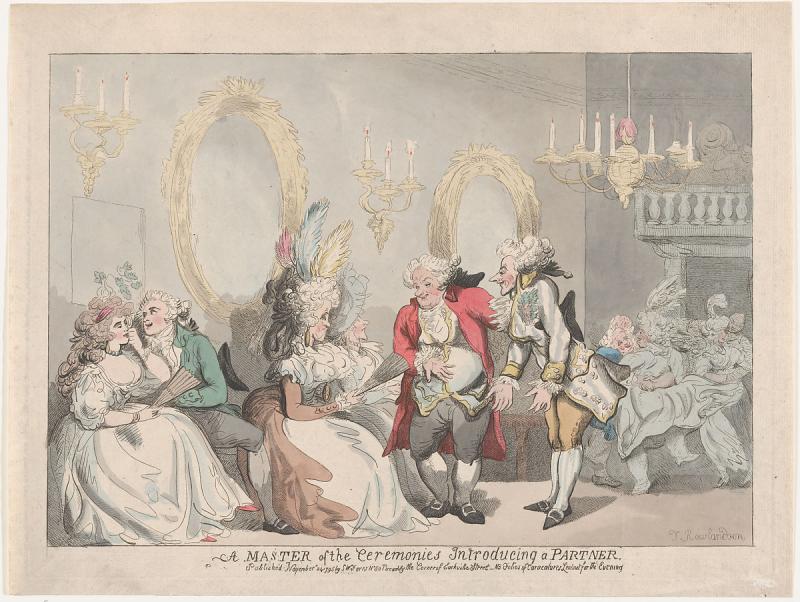 In the long eighteenth century, assembly rooms became an established institution in Britain’s towns and cities, growing in number over the course of the ‘century’. Assembly rooms across Great Britain became the physical and social heart of the community, places where men and women could meet to converse, dance, and attend lectures and concerts. Despite being associational spaces of leisure and sociability, assembly rooms were still exclusive spaces, open to polite society and regulated by the Master of Ceremonies or Lady Directress.

Assembly rooms were institutions that encouraged and regulated sociability in the long eighteenth century, spaces where conversation, music, and dancing occurred. According to Peter Borsay, the oldest known assembly rooms date to the 1650s or 1660s in Tunbridge Wells, a provincial phenomenon that spurred the development of assembly rooms across Great Britain and the wider British empire.1  In their most basic form, assemblies promoted the mixing of polite strata in Georgian society, from the nobility to the middling sort.

Prior to existing in purpose-built buildings, assembly rooms could be located in inns, town halls, and guildhalls depending on the facilities and amenities offered in any given town or city. Inns were constructed with rooms specifically designed for large gatherings and dancing, an ideal place for the local community to gather. The 1838 advertisement for the sale of Whitby’s Angel Inn promoted the spaciousness of the building which could seat 160 guests for dinner, and be opened up ‘when required for Election Balls or large Entertainments’.2  Over the course of the long eighteenth century, purpose-built assembly rooms were constructed in a wide range of urban centers, including spa (Bath and Cheltenham), market (Beverley), county (Newcastle), industrial (Manchester), and port (Bristol) towns and cities. Assembly rooms developed throughout Great Britain, throughout the length and breadth of England, into Scotland, Wales, Ireland, and the Channel Islands.

The development of assembly rooms accelerated in the 1720s, before dramatically expanding across the country later in the century. Peter Borsay noted that, between 1660 and 1770, sixty-five spa and market towns funded and built assembly rooms for their communities, based on newspapers and assembly room records (151, 336-49). The germination of assembly rooms maps onto the ferment of urban entertainments that was brewing between 1688 and 1722, as John Macky observed in 1722 that, ‘These assemblies are very convenient for young people; for formerly the Country Ladies were stewed up in their father's old Mansion Houses, and seldom saw Company but at an Assize, a Horse-Race, or a Fair’ (Borsay 151-2).3  The proliferation of assembly rooms, particularly later in the eighteenth century also maps onto the change in attitudes towards civic life through a town’s mapping and layout, as urban planning reinforced notions of a collective, corporate identity (Borsay 80). Public buildings like assembly rooms contributed significantly to the overall image and gentrification of a town, becoming the heart of civic life and citizenship and physical manifestations of the community in bricks and mortar.

Assembly rooms typically had a few central rooms, including a ballroom, tearoom, and rooms for playing cards. Early definitions of ‘assemblies’ were very basic, expanding over the course of the century to designate appropriate participants and activities. The term ‘assembly’ was defined by Edward Philips in 1720 as ‘a Concourse, or Meeting of People, a definition which emerged when early assembly rooms were being constructed across Britain in the 1710s and 1720s’.4  Ephraim Chambers’s 1741 Cyclopaedia expanded upon Philips’s definition, outlining the audience and purpose of the assembly as ‘a stated and general meeting of the polite persons of both sexes; for the sake of conversation, gallantry, news, and play’.5  The assembly rooms were spaces for balls, concerts, card parties, and other entertainments in which any ‘polite’ community could gather. By 1795, the word ‘assembly’ was specifically linked with the activity of dancing in John Ash’s New and Complete Dictionary of the English Language, defining ‘assembly’ as ‘a company of people met together, a ball or genteel entertainment’.6

The assembly rooms were maintained through regular subscriptions from local residents and visitors to the town, a subscription which covered a series of assemblies for the year as well as refreshments. The presence of a subscription fee demarcates assembly rooms as elite, exclusive spaces open to those who could afford to pay. The subscribers were typically drawn from the middling sort up through the gentry and nobility residing in the area. Those families who formed part of polite society were deemed to be socially acceptable by the Master of Ceremonies or Lady Directress who governed the space. Indeed, many prospective subscribers were required to be introduced to the Master of Ceremonies by an existing subscriber who could vouch for their good character. Those deemed impolite by the Master of Ceremonies or subscribers were barred from entering.

The Master of the Ceremonies or Lady Directress managed the space of the assembly rooms and ensured that the rules of the rooms were followed to the letter. These figures were revered, known as ‘Kings’ and ‘Queens’ who regulated the space.7  Richard ‘Beau’ Nash was one of these ‘Kings of Bath’ whose dictates were law. Indeed, ‘Beau’ Nash required the Duchess of Queensberry to remove her apron, which was forbidden in Nash’s assembly room rules, remarking that ‘none but Abigails appeared in white aprons [… to which] the good-natured dutchess [sic] acquiesced in his censure.'8 The role of Master of Ceremonies was an elected office, as the Master of Ceremonies or Lady Directress usually campaigned for election upon the death or retirement of the previous leader. William Wade was one of the Masters of Ceremonies at Bath’s Upper Rooms in the 1770s and had been a captain in the 73rd Regiment and nephew of Field Marshal George Wade, former MP for Bath.9 For Lady Directresses, who were typically found in the North of England and Scotland, these women were elected from amongst the civic elite.10  In Edinburgh in the 1760s and 1770s, the Honourable Miss Nicky Murray, daughter of the 6th Viscount of Stormont and sister to the 2nd Earl of Mansfield, was one of the Lady Directresses governing the assembly rooms in Bell’s Wynd (Chambers, Traditions, 288-9). In marking the Queen’s birthday in 1775, Miss Murray sat on the throne, ‘representing her Majesty […] and received the proper compliments.’11  Robert Chambers’ description of Miss Murray exemplified the knowledge required to operate as a Master of the Ceremonies or Lady Directress;

Much good sense, firmness, knowledge of the world and of the histories of individuals, as well as a due share of patience and benevolence, were required for this office of unrecognised though real power; and it was generally admitted that Miss Murray possessed the needful qualifications in a remarkable degree, though rather more marked by good-manners than good-nature. (Traditions, 288)

The Master of Ceremonies or Lady Directress was responsible for upholding the rules of the assembly rooms which were usually determined in meetings of the subscribers, as they determined the rules by which they were to be governed.12

Balls dominated the assembly rooms’ social calendar with dance events specifically held surrounding elections, assizes, fairs, races, markets, royal birthdays, and militia encampments. Dancing was organised and regulated by the Master of Ceremonies, who was responsible for making suitable introductions between young men and women. Country dances, minuets, cotillions, quadrilles, reels, and eventually waltzes were danced throughout the evening hours until the assembly came to an end with a signal from the Master of Ceremonies.

Assembly rooms formed the community’s social heart, and provided a physical hub for lectures, music, dancing, and other entertainments. Bath’s Assembly Rooms, for instance, were the setting for Wilberforce’s anti-slavery meeting in 1830. William Wilberforce, abolitionist and former MP for Yorkshire and Bramber, addressed ‘so numerous and respectable a company’ in the Assembly Rooms, speaking with a voice ‘increased in energy, and made a most animated and effective appeal’.13  The assembly rooms therefore filled a range of purposes, blending politics, activism and entertainment under one roof.

Assembly rooms were a product of provincial culture in the long eighteenth century. The 1830s also saw declining use of assembly rooms and the gradual waning of elite influence. The assembly rooms in Beverley declined in usage and became less central to social life in the town by the mid-1830s.14  The use of the assembly rooms in Leeds featured a similar decline, as the 1835 publication, Walks Through Leeds, observed that the rooms ‘had rarely been opened in recent years’, before finally closing in the mid-1860s.15  Before the ultimate closure, repurposing, or demolition of many assembly rooms, Gillian Russell argues that, based on her analysis of the 1794 novel Caleb Williams, the 1790s was the ‘cusp of the time the assembly room began to be conceived nostalgically in fiction as emblematic of a lost form of sociality’.16  While other assembly rooms continued in usage over the nineteenth and twentieth centuries, there was a shift in their popularity as spaces of sociability.