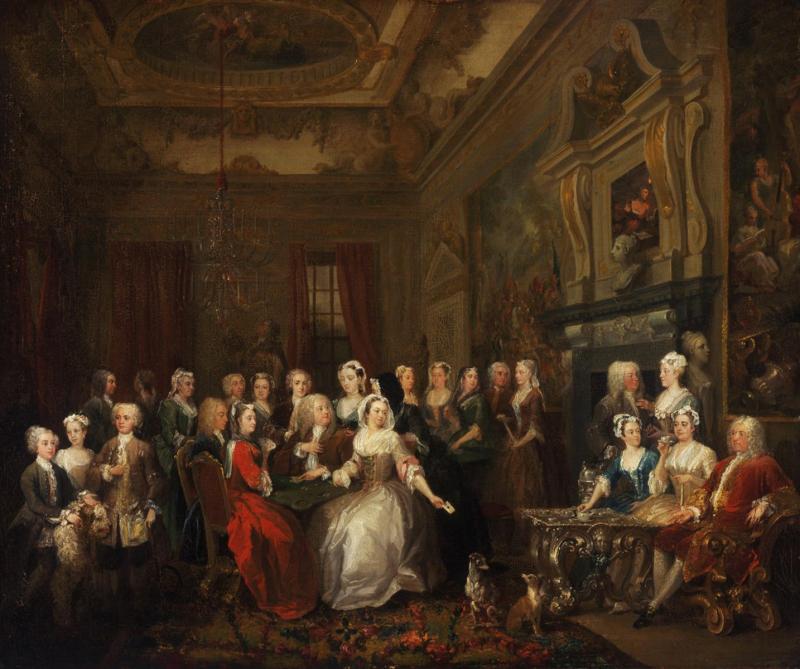 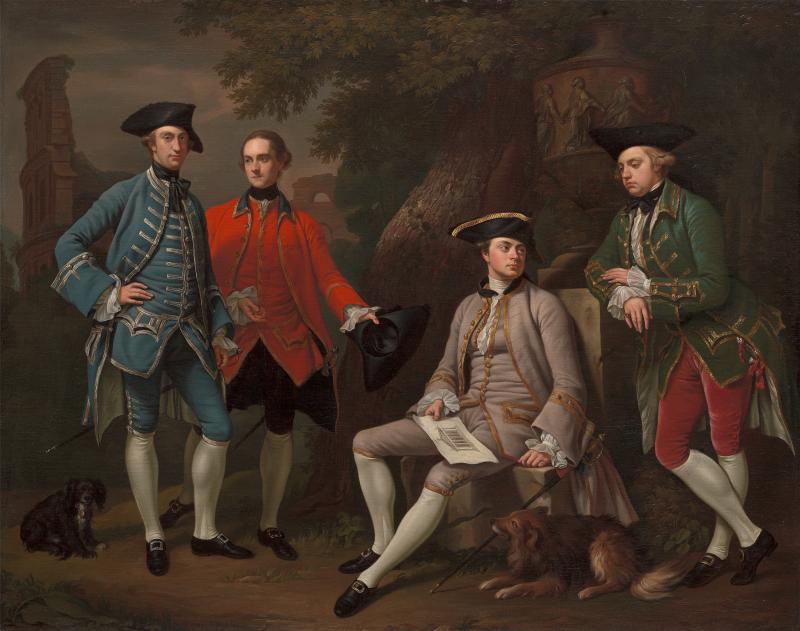 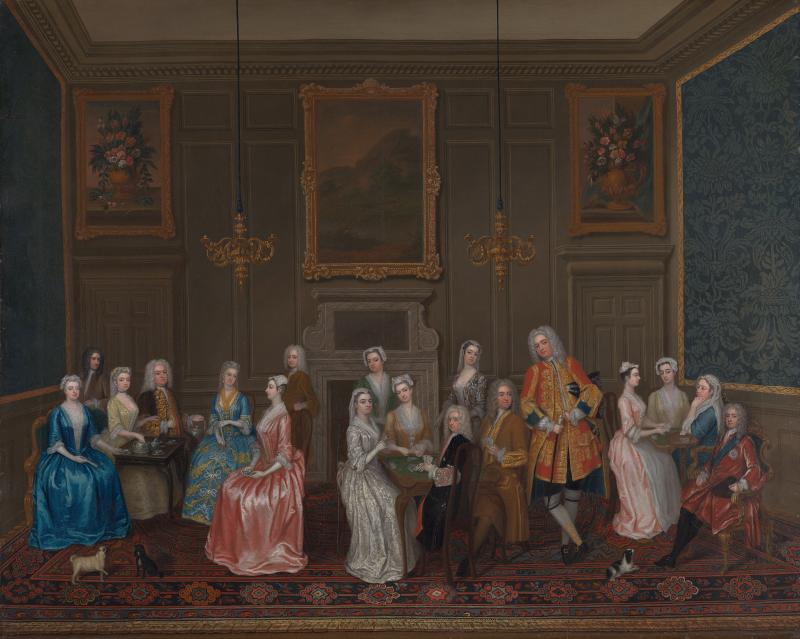 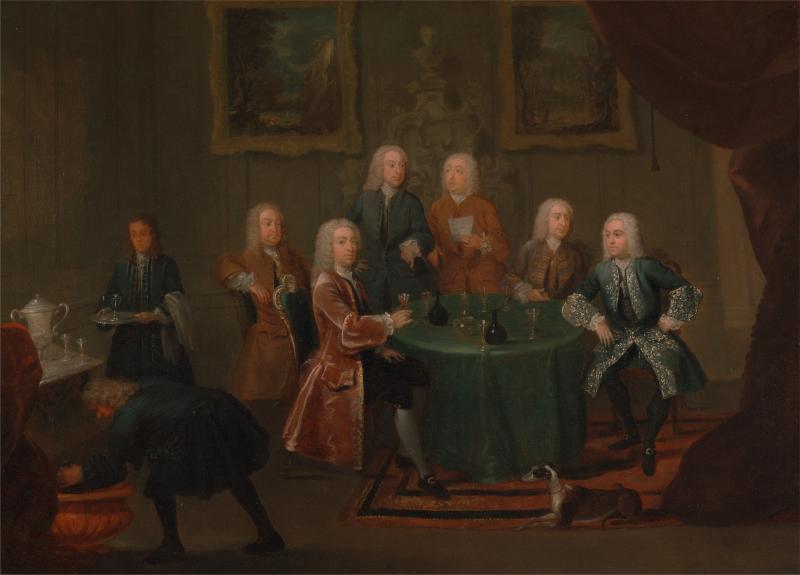 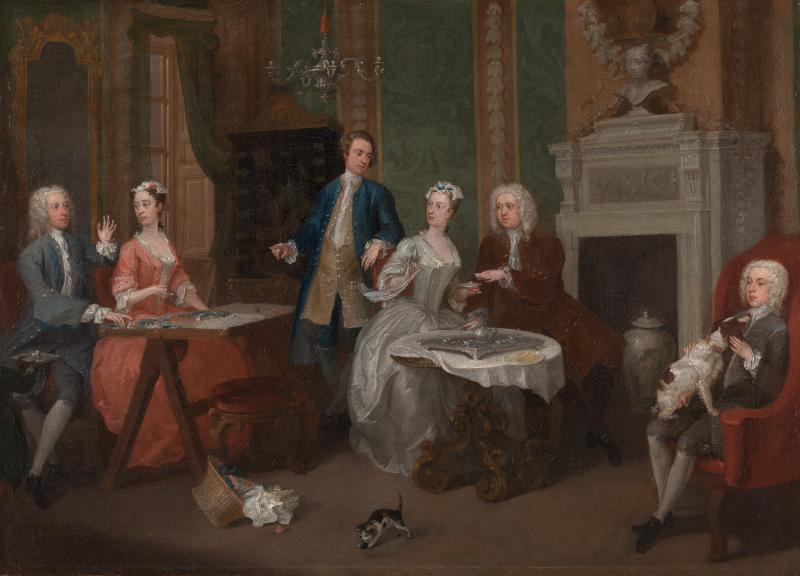 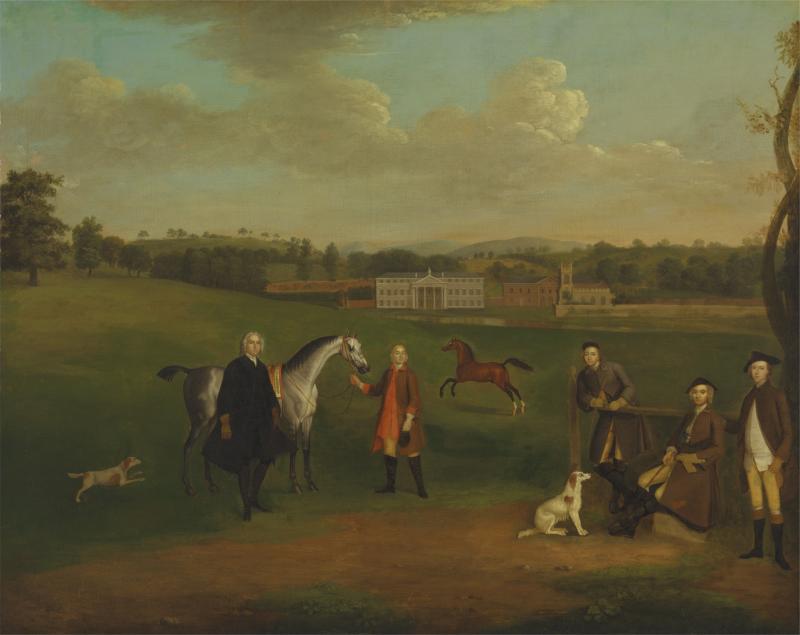 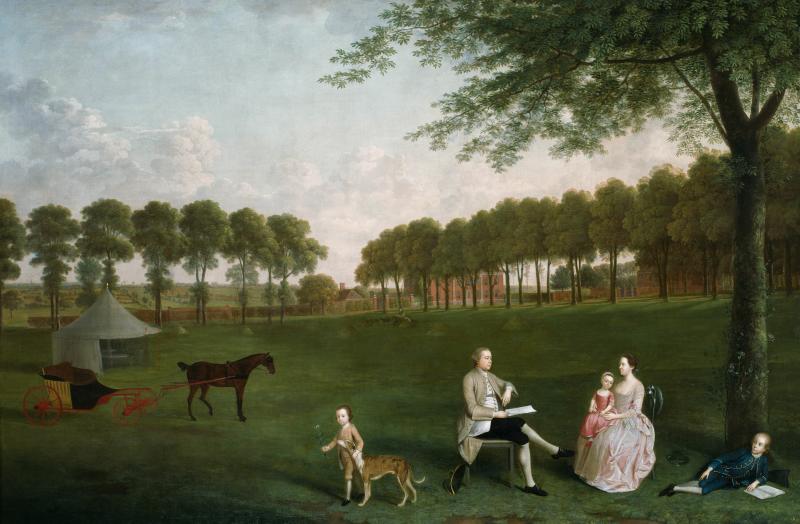 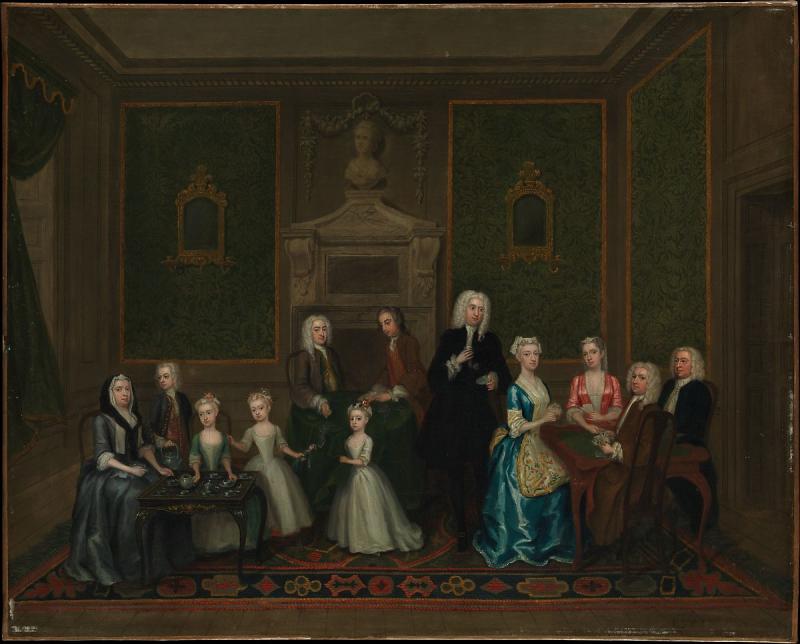 At around the same time as the places, practices and objects of sociability began to flourish, British portraitists started to offer a new mode of portraiture expressive of this culture. After a tentative start in the 1720s, the ‘conversation piece’ took off around 1730, thanks to artists such as William Hogarth, Gawen Hamilton, and Charles Philips. Portrayal of the sitters at full length allowed amplification of the physical gestures and interactions of sociability. Their reduced scale also meant that accompanying objects and settings could be represented in detail, facilitating the portrayal of tea parties, assemblies and card games.

As the practices, objects and sites of sociability flourished in early eighteenth-century Britain, so a new mode of portraiture was developed to encapsulate them: the conversation piece.1  Whilst this category became more capacious as the century progressed, and key characteristics of these portraits diffused through the genre of portraiture more broadly, this was a highly distinctive, immediately recognisable tradition when it emerged in the 1730s, developed by artists such as William Hogarth, Gawen Hamilton and Charles Philips. Their production of small, often heavily populated group portraits, placing a novel emphasis on narrative and setting, was continued by the likes of Arthur Devis, before Johan Zoffany breathed fresh life into the sub-genre in the 1760s, making it newly popular, and even securing sustained patronage from George III and Charlotte. The little paintings produced by these artists provide some of the most vivid visual representations of sociability from the period.

The arrival of the conversation piece can be charted effectively through the writings of George Vertue, artist, antiquarian, and unparalleled commentator on the art world of his day. There are a smattering of references to ‘conversation pieces’ throughout his notebooks of the 1720s, following an established use of the label to describe genre paintings by French and Netherlandish artists such as Jean-Antoine Watteau and Egbert van Heemskerk.2  However, at the end of that decade, Vertue’s occasional use of the term becomes a profusion, and he starts to apply it consistently to a new fashion for small group portraiture. He comments that the ‘paintings of Conversations small figures’ by Gawen Hamilton ‘are agreeable & much variety & correctnes of mode & manner of the time & habits’ (Vertue III, 71). He records that the ‘small figures portraits & conversations’ of Charles Philips ‘has met with great encouragement amongst People of fashion’ (Vertue III, 54). However, the artist about whom he writes at greatest length is William Hogarth: ‘The daily success of Mr  Hogarth in painting small family peices & Conversations with so much Air & agreeableness Causes him to be much followd, & esteemed. whereby he has much imployment & like to be a master of great reputation in that way’ (Vertue III, 40).

Group portraits had, of course, been executed before, but these conversation pieces could easily include a dozen, or even two dozen sitters. This was facilitated by their small size, often around a metre in width, resulting in the representation of figures at typically only 45-60 centimetres in height. This meant that far greater numbers could be included than would have been feasible in a portrait on the scale of life and, indeed, the populousness of these portraits struck Vertue time and time again. He noted there to be ‘at least 18 or 20’ figures in Hogarth’s portrait of The Wollaston Family, for example, and described the artist’s specialism as ‘conversations consisting of many figures’ (Vertue III, 54, 57; my italics).

One of Hogarth’s first experiments in the new mode of portraiture was particularly densely packed: An Assembly at Wanstead House.3

Having started the painting in 1728, he described it in a list of pictures on which he was working the following year: ‘An assembly of twenty-five figures, for Lord Castelmain [Sir Richard Child]’ (actually 26, if one includes the servant).4  Measuring less than 80 centimetres in width, this is a strikingly crowded canvas, crammed with diminutive figures, and it shows the difficulties of managing such a large group in the unsatisfactorily rigid line into which the more distant figures fall, creating an unmodulated row of heads across the back of the scene. Ten years later, the finished work was described by John Loveday as a ‘Conversation-piece of this family and the neighbourhood’.5  This label neatly underscores the key advantage of such multi-figured portraits: they could depict an extensive network of people, not only including members of an extended family as well as the nuclear family, but also encompassing friends and associates. As such they could express the bonds and connections fundamental to the workings of eighteenth-century society, depicting the sociable gatherings which both evidenced and helped to sustain those ties.

A longstanding suggestion is that this gathering, and its commemorative representation, was prompted by Sir Richard and Lady Dorothy Child’s 25th wedding anniversary, giving the bust of Julia on the mantelpiece, and the figure of Portia in the painting above it, added significance as images of two exemplary Roman wives.6  However, it is uncertain as to who is present at this celebration. There have been attempts to name the figures, but only the likely identity of the sitters in the foreground as members of the immediate family is reasonably secure. However, whoever these people are, their representation at full length crucially means that their bodies - particularly their heads and their hands - can be fully expressive, even if the scale means that their features are too tiny to be particularly communicative. Faces are turned towards one another to indicate sociable intercourse; a man in conversation next to the fireplace touches his chest in an expressive gesture; Sir Richard Child acknowledges the woman at the card table who shows him her winning card with his outstretched hand, whilst another lady offers to pour him a cup of tea. There is little sense, however, of the spoken word in such portraits: lips are never parted. Rather, these are diagrammatic displays of the physical gestures that framed sociable exchange: hands arranged according to the edicts of the conduct books, underscoring pleasantries; directive gestures made gently and courteously to guide attention; tilted heads showing people politely paying attention to their interlocutors; restrained and decorous smiles indicating pleasure with the company and their activities. Such portraits also show an emphatically inclusive sociability, with clusters of sitters arranged around card tables and tea tables, whilst any not caught up in such focal points converse in pairs.

Not only were figures in conversation pieces painted on a small scale, but they were also pushed back into the pictorial space, allowing considerable attention to be paid to their surroundings, including the key objects which supported those gatherings. In the 1730s, the most characteristic props were these card tables and tea tables, underpinning two of the most common and popular sociable pastimes of the day. Figures characteristically lay down and pick up cards, whilst partners playing whist confer about their hands. Women preside over elaborate tea tables, often with one hand placed proprietorially on the teapot, as cups are filled, picked up, and passed through the gathering. A kettle of hot water will often be positioned on a stand nearby, ready to refresh the pot, as in the Assembly at Wanstead. Other items in similar groups could include billiard tables, musical instruments and works of art, whilst rowdier homosocial conversation pieces featured wine glasses, wine coolers and punch bowls as their underpinning material culture. Moving outdoors, books, drawing implements and fishing apparel sustained the shared leisure time depicted.

The format of the conversation piece also allowed sitters to be shown in the spaces in which such sociable activities typically took place, rather than with only the relatively plain backdrop, or generic setting of a column and drape, of much earlier portraiture. The Childs, their family and friends are posed in a specific setting, described in a later sale catalogue as ‘A View of the Interior of the Ball Room of Wanstead House, with a Numerous Assemblage of Ladies and Gentlemen’.7  This was a vast space in a vast mansion, running the entire breadth of one end of the house, illuminated by nine windows, and contemporary evidence confirms the depicted lavish decoration and furnishing.8  We also here have a specific time of day for the assembly: it is late afternoon, as the curtains are in the process of being drawn, and a servant has climbed up to light the chandelier. Many conversation pieces conversely situate figures in fabricated settings, generic rather than specific spaces, but all typically show décor and furnishing considered fashionable, tasteful, and appropriate to the wealth and status of the sitters. And they are always spaces intended for gatherings, of greater or lesser intimacy, such as dining rooms, parlours, drawing rooms and saloons. If outside, then those spaces are most commonly sites in a garden or wider parkland with a focal point, such as the side of a lake, a bench in the shade of a mature tree, or a temple designed to provide both a viewing point over the landscape, and cover whilst taking rest and refreshment on a walk or ride.

It is, finally, also worth noting that the physical objects of conversation pieces themselves contributed to the workings of sociability, as well as representing its processes. This is not because the term encompassed a generally more modern idea of a ‘conversation piece’ as a ‘talking point’, but rather because it was not uncommon to commission more than one version of such a portrait, so that two or more of the sitters could own and display it. This is particularly notable with conversation pieces executed in Italy in the second half of the century, depicting groups of Grand Tourists. Copies could be provided for each of the milordi to display in their homes once back in Britain or Ireland. Nathaniel Dance’s 1760 portrait of James Grant, John Mytton, Thomas Robinson and Thomas Wynne is a case in point, with four copies produced.

On the one hand, this picture depicted the sociability of these friends, discussing a drawing of the Temple of Jupiter, flanked by further examples of the classical material culture which they explored and discussed on their travels: the Colosseum and an urn bearing the relief of The Borghese Dancers. On the other, it also sustained that sociability, as its replicated surface in the sitters’ four houses continued to mark their shared experiences, and bonds of friendship (Retford 267-9, Dorment 90-7).

Retford, Kate, ‘The Topography of the Conversation Piece: A Walk around Wanstead’ in Gill Perry, Kate Retford and Jordan Vibert, with Hannah Lyons (ed.), Placing Faces: The Portrait and the English Country House in the Long Eighteenth Century (Manchester: Manchester University Press, 2013), p. 38-62.