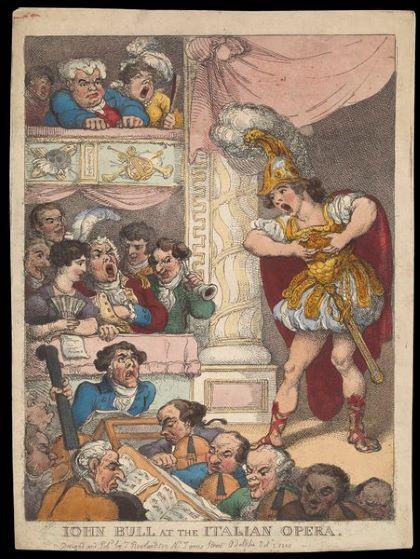 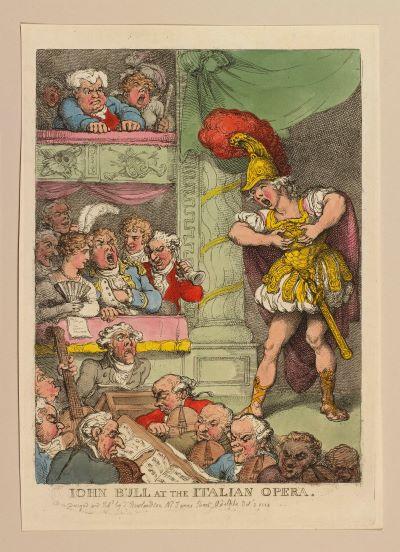 In the so-called ‘long‘ eighteenth century (starting in 1660), the theatre can be seen as sociable space more than as a site for a purely aesthetic experience. The sociability of the theatre however goes far beyond the space of the physical theatre itself. Theatre is also at the centre of transnational networks, as performers travel across the Channel and texts are adapted, translated and plagiarised, often around prominent personalities whose personal influence and connections play pivotal roles.

Perhaps more than a place for aesthetic pleasure, the theatre is above all one of the main sites of city sociability in the London of the long eighteenth century. Although the audience was not as socially diverse as during Elizabethan times, nevertheless the theatre remained a meeting and mingling place for different social groups, including merchants, apprentices, office-holders or state officials. The social composition of the Restoration audience has remained an object of debate since the A. S. Bear-Harold Love controversy, but the pricing policies of the theatres and their relatively small capacities seem to indicate a comparatively gentrified audience, though not exclusively. It is also clear that, as evidenced by Pepys's accounts, to have different social classes in the same place does not systematically imply inter-class mingling.1 The king himself attended regularly, accompanied by his mistresses, courtiers or ambassadors. It was also a major contact point and platform for international exchanges, both as a physical space and as a virtual community. Even today, foreign visitors often consider a visit to the London theatres a must: such was the case for Lorenzo Magalotti, who, accompanying Cosimo III on his visit to England in 1667, was impressed by the promiscuity of the place.2 Moritz, in his Travels, Chiefly on foot (1795), also mentions the famous rowdiness of English audiences, describing his narrowly missing an orange thrown at his face by an excited member of the audience.3

But what was the impact of transnational sociability on the English stage? Transnational contact between theatrical circles followed a logic at least partially independent from greater geopolitical factors. One of the striking traits of foreign influence and presence on the English stage is the unbalance in the perceived importance of the different European countries. For example, Portugal and the United Provinces have left remarkably little trace, despite Charles II's marriage to Portuguese princess Catherine de Braganza (who came to London with her court in 1662), as well as two Dutch wars and the arrival to the throne of the House of Orange.4 Very few characters on stage are Dutch (one famous exception being the comic butt in Aphra Behn's The Dutch Lover), and Dutch plots are close to non-existent. Even passing allusions to the Low Countries, through characters of disbanded soldiers coming back from the wars in Flanders for example, are few and far between. This imbalance between geopolitical importance and theatrical importance shows how theatrical networks, sociabilities and traditions, which were already well established in France, Italy and Spain, seem to have taken over any other possible factor of influence on the English stage.

In the case of France however, geopolitical importance is reflected by matchless cultural domination, which reflects also on the stage. Louis XIV hosted his cousin Charles (later Charles II) during his years of exile, and the French court's interest in theatre is likely to have inspired at least in part the latter's early decision to restore it, for the first time, as an official institution.5 The most visible trace of French influence lies in the exploitation of source texts, be it through translation, adaptation or outright plagiarism, as the distinction between the three is unstable.6

Many English plays of the time are borrowed from French sources, some of the most famous examples including Molière's L'Étourdi and Philippe Quinault's L'Amant indiscret, two inspirations behind Dryden's Sir Martin Marr-all; or Molière's Les Fâcheux for Thomas Shadwell's The Sullen Lovers: Or, The Impertinents. Again, as many studies have shown, there seems to have been more of a continuum than a clear distinction between translation, adaptation and sheer plagiarism. Though many prefaces provide an occasion for playwrights to defend themselves against accusations of plagiarism (one example being Aphra Behn's The Rover, said to have been inspired a bit too closely by Killigrew's Thomaso), it was probably tempting to go unnoticed reusing little-known foreign or forgotten English sources.7 French ambassador Barillon's personal influence is also worth mentioning, particularly in his relationship with the Duke of York, later James II, and at the centre of a powerful French-oriented network. Francophile sociabilities also constituted a strong factor, particularly after the Revocation of the Edit de Nantes in 1685: the playwright Thomas D'Urfey for example claimed to be of Huguenot ancestry, and many of the period’s playwrights could read at least some French.8  The frequent language mistakes are particularly interesting, as it is unclear whether they should be attributed to the character's, the playwright's or the printer's ignorance. The strong presence of French characters on stage (such as the cowardly cook Monsieur Raggou in The Old Troop: Or, Monsieur Raggou)9  and the depiction of Francophile characters reflect the ambivalence of English attitudes towards France: having a French tailor or speaking French with affectation often characterises comic butts, but conversely a correct mastery of the subtleties of French fashion and language may be a marker of social prestige, though not always.10

France also served as a transit point for other European plays, particularly Spanish ones. John Dryden's An Evening's Love; Or, The Mock-Astrologer, cites as its source Thomas Corneille's Le Feint Astrologue, itself inspired by Pedro Calderón de la Barca's El Astrologo Fingido. William Davenant's The Man's the Master is a near translation of Paul Scarron's Jodelet, ou Le Maître Valet, which is in turn taken from various Spanish sources and traditions.11

Direct translations or adaptations of Spanish plays were also immensely popular: Dryden's The Assignation: Or, Love in a Nunnery from Calderón Con quien vengo vengo being a famous example, and John Crown's Sir Courtly Nice; Or, It Cannot Be is also heavily indebted to Agustín Moreto y Caban's No puede ser. Spanish performers had also long enjoyed great success on the London stages. The case of Thomas Killigrew, who served as a soldier in the Spanish army during his years of exile, is an interesting one, as it draws from both novel sources, which may have been found on site, and autobiographical ones.12 Spain and Italy (unlike France, despite notable exceptions) are also generally popular locations for theatrical action, as is the case for Dryden's Conquest of Granada.13

However, Italian influence seems to have circulated less through texts and more through performers, at every end of the social and artistic scale. There are traces of regular visits to London fairs by commedia dell'arte performers, who did not need to speak English to impress their audience (and this influence reflects in turn on institutional theatres) at least from the sixteenth century. Italian singers such as Farinelli, Caffarelli and Angelica 'the Cat' Catalani, who travelled or even settled in London, often invited by prominent figures of the local scene such as Haendel, were influential in the birth and definition of a separate operatic genre.

The question remains whether this influence was always reciprocal? It seems that English theatre was largely ignored on the continent for the larger part of the seventeenth century. Despite very few references in plays, what is now known as the Germanic space is one of the very first continental areas to have been interested in English plays, especially Shakespeare's (though his name might not have been well-known), through the intersession of visiting actors and learned circles, with translations dating back to as early as 1620. It is not unlikely for the resemblance to the Shakespearian text to be a coincidence due to the use of common sources. The first real translation of an English play, Shakespeare's Julius Caesar, was printed in Germany, the work of a former Prussian ambassador in London.14 The area retained an advance on other continental countries, Gotthold Ephraim Lessing being a leading figure in the spreading of Shakespearean drama. However, interest in English theatre during the eighteenth century witnessed a progressive surge in the rest of the continent, through key facilitators such as Voltaire and Pierre-Antoine de la Place in France.15 Garrick, with his powerful British and continental connections, was afterwards responsible for much of what was becoming a bard-cult, in England and overseas.16

The tightness of these networks however must not obliterate extra-European presence on stage:  many plays reference the Ottoman and Islamic world, such as Elkanah Settle's Cambyses, John Crowne's Darius, King of Persia or Colley Cibber's Xerxes. The English stage was therefore a space which extended far beyond the borders of England because it lay at the intersection of various different layers of sociabilities. The stage itself saw many foreign artists, whether invited or settled in England, express their talents. The circulation of sources also constituted virtual theatrical and literary networks, organised around influential figures who travelled and corresponded with one another across borders. Such literary exchanges were not detached from broader geopolitical factors, whether acknowledging existing dominations or challenging them. In this way, the theatre provided a physical and virtual space for European and world-wide networks, exchanges and sociabilities.