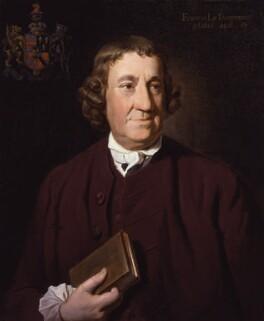 A well-travelled man, Francis Dashwood, 11th Baron le Despencer, was a founding member of the Dilettanti and the Divan Club, and a vital contributor to the proliferation of neo-classicism in eighteenth-century London. He is best known for inciting the lurid imagination of Grub Street through the creation of the Brotherhood of St. Francis, a secret society which has since come to be known as the Hell-fire Club. Thus, on the one hand, Dashwood’s life highlights the importance of traveling to London’s eighteenth-century club scene, specifically how the impressions gathered in other countries influenced the practices of the clubs he founded; on the other hand, his involvement with the Hell-fire Club provides a remarkable if distorted mirror image of the eighteenth-century society’s focus on manners and conviviality.

The history of Sir Francis Dashwood, 11th Baron le Despencer (1708-1781), is marked by contradictions. Many of his contemporaries describe his private and political conduct as laudable,1  and in 1733 Baron Forbes (1685-1765)2  had no issue entrusting a young Dashwood with vital political correspondence about the ongoing events at the court of St. Petersburg, stating that Dashwood’s presence afforded him the licence ‘to write with more freedom’.3  As a testimony to his character, Dashwood was using his influence to provide the unemployed with poor relief and presided in leading roles at the Foundling Hospital and the General Medical Asylum (Kemp 15). Yet lurid stories overshadow much of his altruistic work. As the founder of the Brotherhood of St. Francis, a society which has since come to be known as the Hell-fire Club, Dashwood rose to infamy, providing tinder for the fertile imagination of the hack writers of Grub Street and thus the public at large. His influence on the club scene of eighteenth-century London extends far beyond the Brotherhood, however, even if that proves to be his most enduring legacy. The long list of his memberships and associations – the Sublime Society of Beefsteaks; the Society of Antiquaries; the Lincoln Club; the Royal Society; the Society for the Encouragement of Arts, Manufactures, and Commerce – shows that he was an eminently clubbable figure. Aside from the Brotherhood and his many memberships, Dashwood was also involved in the creation of two further institutions: the Society of Dilettanti, and the Divan Club. Undoubtedly, he has to be considered a key figure in the development of the social sphere of eighteenth-century London.

Dashwood was a well-traveled man. Like many of his upper-class contemporaries, Dashwood undertook a Grand Tour, starting in 1726 at the age of eighteen. Not much is known about his initial years of travel, except that he first visited Germany and France, and ended up in Italy from 1729 onwards, eventually ‘signing the visitor’s book in Padua University’ in the spring of 1731, culminating his first foray onto the continent.4  This journey, and the many to follow, laid the groundwork for the impact he would later have on London society. Travelling set him up with enduring friendships and provided inspiration for the clubs he was to found. On his first trip to Italy, he befriended the Abbé Antonio Niccolini (1701-1769), a friendship that would hold until the Abbé’s death in 1769. Through Niccolini, Dashwood also got to know Montesquieu (1689-1755) as well as multiple other antiquaries and scholars.5  Dashwood’s second journey to Italy in 1739 saw him briefly in the company of Lady Mary Wortley Montagu (1689-1762) as well as Horace Walpole (1717-1797), the latter forming a decidedly unfavorable opinion of him.6  While his time in Italy led to a fascination with classical architecture – an interest that would later be reflected in the reconstructions of his family seat in West Wycombe and the founding of the Dilettanti – Dashwood’s tour to Greece and Turkey saw him indulge in fantasies of the Orient, leading directly to the creation of the Divan Club.

Despite these inspirations, travelling also cast Dashwood in a rakish light, an impression that would follow him even beyond his death. Grand Tours were not only opportunities for aristocratic youths to acquire worldliness, but also crossroads where travelling, politeness, and libertine behavior intersected. Consequently, sensationalized rumors abound about Dashwood’s multiple stays in Italy and his later visit to St. Petersburg. They mostly stem from Walpole’s Memoirs of the Reign of King George the Third (1845), their veracity called into question due to Walpole’s inveterately low opinion of Dashwood. Indeed, some are so fantastical in nature as to beggar belief, such as the story that, during a service in the Sistine Chapel, Dashwood considered the penitence to be too soft and instead ‘produced a real horsewhip and strode up and down giving the penitents a real flogging’ (Walpole 173); or that, imitating Charles the Twelfth, Dashwood ‘had travelled to Russia in hopes of captivating the Czarina’ (174f).

What can be relied on with more certainty is the journal Dashwood kept of his stay in St. Petersburg and Copenhagen.7  There he remarks that ‘the men are very jealous, and the Wives serve them, accordingly, whenever they have an Opportunity […] in short, this is no place, for those, who travell for pleasure’.8  This judgment (a surprising deviation from the diary’s previous content), the sudden attention to the story of a hermit who ‘enjoyed most of the country girls all about’ (ibid), and the letter of Lady Montagu, who wrote to Lady Mar in 1740 that during his second stay in Italy Dashwood spent all his days with a Mrs. D’Arcie (cited in Lord 89), point at the very least to a grain of truth in the sexual rumors, if not to the lurid hearsay spread about him by Walpole and others.

Dashwood’s travels to Italy and later Greece can be linked directly to the founding of the Society of Dilettanti, whose goal was ‘promoting knowledge and understanding of classical art and taste in England’ (Kemp 101). The Dilettanti helped publish works in the field, most notably James Stuart’s and Nicholas Revett’s The Antiquities of Athens (1762), previously having sponsored their journey to Greece in 1751. They also ‘played a part in the foundation of the Royal Academy’ in 1768.9  The first minutes date back to 1736, but the club likely was created earlier,10  and changed location frequently until settling at Almack’s in King’s Street.

The meetings took place in an exclusively homosocial space, and the shape of their ballot box, the circular aperture of which is located right between the legs of ‘a female figure of justice’,11  points to a sense of ribaldry permeating their gatherings. In a letter to Horace Mann, Walpole famously commented that they were ‘a club, for which the nominal qualification is having been in Italy, and the real one, being drunk’.12  There is little doubt that convivial drinking was involved in the gatherings of the Dilettanti, as well as lavish expenditures, such as on a ‘mahogany armchair covered with crimson velvet’ (Redford 4), initiation rites, and its members dressing up in togas.13  Dashwood’s membership with the Dilettanti spanned more than thirty-five years, and during that time he ‘sat on nearly all its important committees’ (Kemp 101), indelibly impressing his fascination with antiquity upon London’s upper class. To this day, the Dilettanti remain a fixture in London, meeting regularly at Brooks’s Club.

Just as the journeys to Italy had done, Dashwood’s visit to Constantinople spurred him to create another society upon his return to England, albeit one that was comparatively short-lived. The Divan Club held its first official meeting on January 8th 1744 at the Thatched Tavern in St. James Street, and had its last gathering on May 25th 1746. As with the Dilettanti, the prerequisite for membership was to have visited the country in question. The members enjoyed dressing up in oriental garb, calling the minute book the ‘Al Koran’ and themselves by specific names such as ‘Hasnadar’, ‘Reis Effendi’, or ‘First Vizir’ (Lord 91).

Their toast was called ‘The Harem’ (ibid), and the club centered around convivial dining while sharing tales of the members’ respective journeys to Turkey.14  Contrary to the Dilettanti, the Divan Club admitted women. While the initial members were predominantly male, the multiple portraits commissioned for the society hint at the inclusion of ladies such as Sarah Dashwood, Le Despencer’s wife; Mary Walcot, Dashwood’s half-sister; the famous travel writer Lady Mary Wortley Montagu; and Fanny Murray, the mistress of the Earl of Sandwich. This inclusion of both Dashwood’s half-sister and wife, according to Lord, ‘belies the accusation that the club was a private brothel’ (ibid), making the admission scheme of this club a rarity in eighteenth-century London.

Nevertheless, rumors swirled about the Divan club, and perhaps this was the reason why Dashwood preferred a more private setting for his next society, withdrawing to his estate while inviting many of his old political and club acquaintances. Founded at the time of the dissolution of the Divan Club, this elite gathering called itself the Brotherhood of the Knights of St Francis. The first meetings are said to have taken place at the George and Vulture. Later the Brotherhood moved to Dashwood’s family seat in West Wycombe, before relocating to a repurposed abbey in Medmenham. It is unclear to what extent mock-religious rituals occurred at Medmenham.15  While it is said that Dashwood developed ‘an acute antipathy towards the Roman Catholic Church’,16  his longstanding friendship with the Abbé Niccolini weakens such assertions. Fragments of Medmenham’s cellar-books do hint at ample drinking,17  and at least some clues indicate the presence of women and sex.

Moreover, they seem to have held readings of satirical, occult, and pornographic literature, some of the library’s books sporting ‘false bindings suggesting that they were prayer books or collections of sermons’ (124f). However, no evidence exists for alleged Satanic rituals or Devil-worship, the rumors of which became ever more extreme in the nineteenth century. These rumors have grown out of the sensationalized stories of Dashwood’s past, such as the alleged flagellation in the Sistine Chapel, and many an author’s desire to make money. Given Dashwood’s later collaboration with Benjamin Franklin to introduce a shortened version of the Common Book of Prayer to the public, such stories appear patently absurd.

A fallout between the Friars, specifically John Wilkes and the Earl of Sandwich, led to the discovery of the Brotherhood in 1763 and threw Grub Street into a frenzy, thrusting Dashwood into the spotlight. Newspaper articles such as Wilkes’ piece in the Public Advertiser of June 2nd 1763, or later the Town and Country Magazine of November 1769, directly refer to the Friars; and Charles Churchill, a friend of Wilkes and a former member, led an attack through his poems The Conference (1763) and The Candidate (1764). Furthermore, many fictional accounts, such as Charles Johnstone’s Chrysal (1760-1765) which included a new chapter about the Friars in its revised edition after 1763, or Nocturnal Revels (1774), have been gladly taken as fact, mutating the legend of Medmenham into a sordid affair involving not only sex and drink but also all imaginable blasphemy. Thus, the scandal became irrepressible, and Medmenham’s legacy has captured the fancy of authors ever since.18

Ultimately, Dashwood’s life was fully imbricated in London’s eighteenth-century club scene. Not only did  he hold many memberships, but based on the impressions he gathered during his travels, he also co-founded multiple societies focused on dining, sharing travel experiences, and propagating art. The most notorious aspect of his legacy however remains the Hell-fire Club, a distorted mirror image of clubbable society where sociable interactions were observed, yet which found itself implicated in accusations of debauchery and blasphemy. Away from prying eyes, it thus functioned as a pressure valve to societal strictures, yet in its general makeup was nevertheless fully adherent to sociable rules such as having regular meetings, appointing a leader and a location, and keeping accounts of expenditures. As such, Dashwood’s polyvalent Hell-fire Club proved to be a rakish oddity in a society focused on manners and politeness, as was the man himself: patron, traveler, politico, philanthropist, but also, undoubtedly, rascal and rake.