Henry Oldenburg (and the Philosophical Transactions) 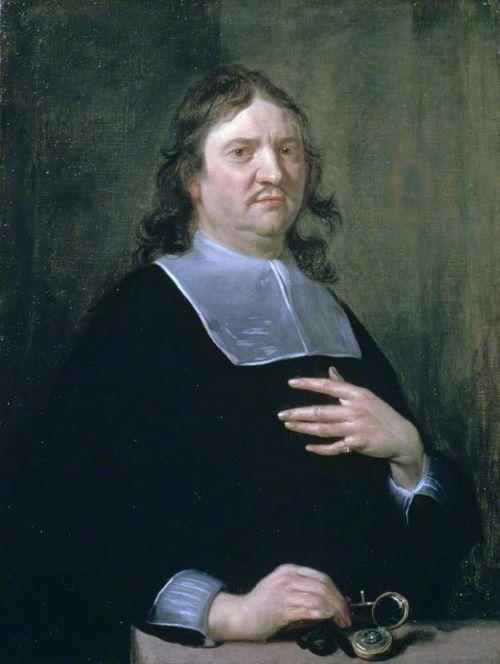 Henry Oldenburg was at the centre of the two local social groups formed by the Royal Society, of which he was one of the secretaries, and the international social grouping created by his network of correspondence. He used this network to found the Philosophical Transactions, the first periodical devoted entirely to science and technology. Oldenburg and the journal he created were central to the development of a social scientific international community during this period.

In the late seventeenth century, scientists, or ‘natural philosophers‘ as they were then known, formed two types of social groupings, one local, and one wide-ranging, frequently international. Henry Oldenburg, not himself a scientist, but closely involved in scientific matters, falls into this pattern. He was one of the first secretaries of the Royal Society of London, and he was the centre of a network of scientific correspondence, which was to form the basis of the Philosophical Transactions, the first periodical devoted to science and technology.

Henry Oldenburg was closely involved with the Royal Society. Although he was not present at the founding meeting,1 which took place at Gresham College on 28 November 1660, his name was on a list of forty prospective members. He accepted the invitation and subsequently became one of the Royal Society’s two secretaries, the other being John Wilkins. The fact that Oldenburg was a polyglot may have been a factor in his choice: in addition to his native language, German, he spoke English, French, Italian, and Dutch, and knew Latin, Greek and Hebrew. This, of course, was to stand him in good stead as the centre of an international social network of scientists. Oldenburg was already well-known to the group who formed the Royal Society. He had first come into contact with Robert Boyle through Boyle’s nephew, Richard Jones, to whom Oldenburg was tutor. Through Boyle’s influence, Oldenburg was introduced to the group of experimental scientists who met in Wilkins’s rooms in Wadham College. This was the group which would later be instrumental in the creation of the Royal Society, and it was Oldenburg’s first contact with the new experimental scientists, and the first step in creating the social network of which he was to become the hub. It is from this point that we can date Oldenburg’s nascent interest in science, and the first evidence of this is in a letter that he wrote in 1656.2  As secretary of the Royal Society he was in intimate contact with this group of men who had espoused the new experimental science, and who promoted it through their weekly meetings where they read and discussed papers and correspondence, and carried out experiments.

So, from 1660, Oldenburg was closely involved with the social group formed by the Royal Society. At  the same time, he had already established a network of correspondence that stretched across the continent of Europe. In 1657, Oldenburg and Richard Jones left to travel on the Continent, initially in France, and subsequently in Switzerland and Germany, before returning to France in late 1658. It was during this period that Oldenburg met numerous scientists, and thus began building up his social network of scientifically-minded people. This was reinforced during a fairly lengthy stay in Paris, where he met the Parisian scientists, notably those connected with the Montmor Academy. They returned to England in 1660.

Until the second half of the seventeenth century there had been two ways of disseminating scientific knowledge. The first was in books, but books were long to produce, both in terms of writing them and then getting them through the publication process, and they were not easy to distribute. The second was through letters. Although these letters were sent from one individual to another, they were not private letters in the present-day sense; it was generally understood that the writer’s intention was that they should be copied, sent on, read at meetings, and disseminated as widely as possible. They could even be used as evidence in priority disputes.3  Oldenburg was not the first, nor the only person to act as the centre of a correspondence network of this type. A little earlier, Mersenne had fulfilled this role in Paris, there was a network centred on Fabri de Peiresc in Montpellier, and those of Haak, Hartlib and Collins in England.4  However, Oldenburg’s was probably the largest and most important of these networks.5  Most of the members of the Royal Society were virtuosi, or gentlemen scientists of private means, who did not have to earn their living. This, however, was not the case with Henry Oldenburg, for whom making ends meet was a constant preoccupation. As secretary of the Royal Society he received a small stipend of, initially, £40 per year, but this was paid irregularly, and not always in full. He also worked as a tutor and translator, but his revenue remained modest. His situation at the centre of a network of correspondence had been enhanced by his position as Secretary of the Royal Society, and it was thus that he conceived of the idea of creating a newsletter of scientific information which he could sell to augment his meagre income. The first issue of his newsletter, the Philosophical Transactions, came out on 6 March 1665. The first issue of the Journal des Sçavans6  had appeared two months earlier in Paris, but whereas the Journal des Sçavans was state-sponsored, made up mainly of book reviews, and covered the whole range of academic disciplines, the Philosophical Transactions was a private venture, based on Oldenburg’s correspondence, and restricted to questions of science and technology.7

That the scientific communities of Paris and London were in fairly close contact is evidenced by the fact that the first issue of the Journal des Sçavans was presented to the Royal Society, by Oldenburg, only six days after it had appeared in Paris. Since the Royal Society had a licence to publish, necessary in those censorship-ridden days, it was the Royal Society that ordered its publication, and it bore its imprimatur. For this reason, and much to the chagrin of Oldenburg, the status of the Philosophical Transactions was often misunderstood, frequently being seen as the official organ of the Royal Society. Oldenburg repeatedly pointed out that he was the owner of the publication and had full editorial and financial responsibility for it. It was only in the 1750s, almost a century later, that the Royal Society would take over responsibility for the journal, thus making it, at last, its official publication.

The first years of the publication of the Philosophical Transactions were not particularly easy. Oldenburg’s relationship with the printers or ‘stationers‘ as they were known, were riven with difficulties.8  Publication was interrupted by plague in 1665, the Great Fire of London in 1666, and the imprisonment of Oldenburg during the Anglo-Dutch War in 1667,9 but the Philosophical Transactions survived and became one of the most important outlets for scientific writing.

Originally, Oldenburg had intended to bring out a three-monthly Latin edition, which he thought would sell more readily abroad than the English edition, to those who did not master that language. Before he could do this, however, two other Latin translations were printed, without his authorization, though at least one of the translators had been in contact with him. However, he was so dissatisfied with the results that he disowned them, and the proposed Latin edition never came about.10

In the first issue of the Philosophical Transactions, all of the eleven items were written by Oldenburg himself, on the basis of information he had received in his correspondence. Significantly, one of the items is the translation of the review, which had appeared in the first issue of the Journal des Sçavans, of an Italian book. Whether he found this too onerous or not can only be a matter for conjecture, but from the second issue on he began printing letters and letter extracts verbatim. By the end of 1665 he had established a practice whereby he printed verbatim material wherever possible, that is, by printing letters and letter extracts, papers read at the Royal Society, or sometimes other similar groups, and as time went, articles that were submitted to him through the post. He wrote himself book reviews, and items that would otherwise be too long, such as book summaries, and items which were in other languages and so had to be translated. He continued this practice until his death in 1677.11

Thus Henry Oldenburg was at the centre of the local social group formed by the Royal Society, and at the centre of an international social network of scientists, of which the Philosophical Transactions is the physical witness. He was instrumental in moulding the scientific world of the late seventeenth century, and his influence can be felt in the subsequent development of scientific periodicals.

Banks, David, The Birth of the Academic Article, the Journal des Sçavans and the Philosophical Transactions, 1665-1700 (Sheffield: Equinox, 2017).

Lyons, Henry, The Royal Society 1660-1940. A History of its Administration under its Charters (Cambridge: Cambridge University Press, 1944).