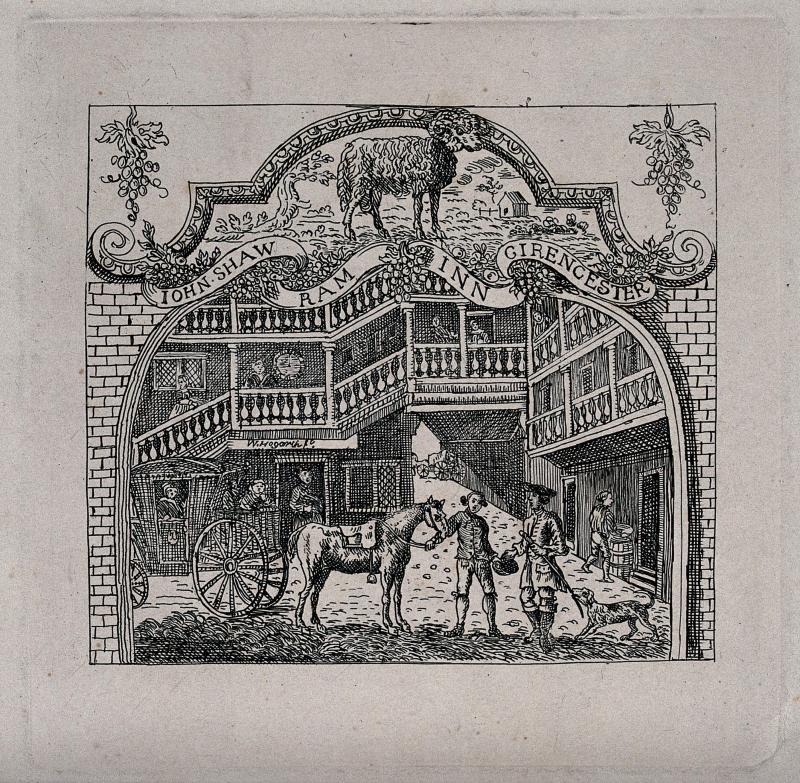 The late seventeenth and eighteenth centuries were a veritable ‘golden age’ of the inn. Inns, where coaches arrived and departed, were nodal points of the transport system. They offered rooms to stay overnight, food, and stables, and were often huge purpose-built business complexes with shops and storage facilities, situated alongside major roads in the provinces, and town centres, and in cities. They also functioned as sociable spaces for locals, travellers, tradesmen, and politicians. In the hierarchy of eighteenth-century drinking-places, inns were superior to pubs and alehouses. They sometimes functioned as settings for novels, facilitating encounters between individuals belonging to different strata of society. With the advent of the railway network in the nineteenth century, they began to decline.

In the late seventeenth and eighteenth centuries, a period which John Chartres has called ‘the golden age of the British inn’1 , this institution fulfilled a number of rather diverse sociable functions, ranging from the sale of food and drink to being a forum for local politics. The inn, much older than the comparatively young coffee-house, was one of several types of eating and drinking venue. Chaucer's medieval Tabard, offering food and accommodation for pilgrims2 , is the British literary Ur-inn, but alehouses and taverns were also hospitable venues with historic roots, albeit less well documented. The alehouse was a ‘place of popular drinking’3 , frequented by less affluent customers and those lower down in the hierarchy, while the tavern, where drink was sold, too, seems to have been considered more respectable (Clark 5, 12). As inns catered for a more elite kind of customer than alehouses and taverns, the selling of drink was not their main purpose. Due to regional differences and economic ups and downs, it can be difficult to define these venues against one another, particularly as the nomenclature could change over time. In the late eighteenth century, for example, under the influence of French fashion, some inns upgraded themselves into hotels simply by adding the word ‘hotel’ to their names.

John Chartres suggests that there were about 3,600 inns in England in 1577 and about 6,000 to 7,000 at the beginning of the eighteenth century (Chartres,'The Eighteenth Century Inn', 207). They were of various sizes: London had about 200 major inns by the early eighteenth century, some of which were fairly large (Chartres, 'The Eighteenth Century Inn', 208).4  Inns were also situated along the major roads in Britain and served as departure points and destinations for coaches. At a time when traffic on the roads was increasing, they were an important part of the transportation network. Horses were changed at inns and goods were unloaded, while travellers boarded or left the coaches. Larger inns often had courtyards with galleries, from which travellers could access their rooms. They could rent a room to sleep in, but beds might have to be shared with other travellers. Also available were one or several parlours and rooms for meetings. Not only goods but also news were exchanged. The architectural structures testify to the sociable experience, which was fictionalized in novels.

As ‘commercial institutions’, ‘mixed business complexes’ (Chartres, ‘The Capital's Provincial Eyes', 24, 27), the larger inns had shops, storage facilities, stables, smithies, and kitchens. Inns were purpose-built, in some cases with a medieval or early modern core, to which other structures had been added. A trade card for John Shaw at the Ram Inn in Cirencester (supposedly created by William Hogarth, but in fact a forgery) provides a good view of what the inn yard and the galleries, including staircases, looked like.

It also shows the inn as a fairly sizeable complex.

The image below by the caricaturist Thomas Rowlandson (1787) presents a coaching inn, obviously a rural inn, which is much smaller.

At the centre of his image is a huge inn sign, situated in the middle of the road and towering over the two coaches. Inn signs, which could be attached to a building but could also hang above the street to draw attention to an establishment, belonged to the inn's architecture and provided a visual reference to its name.6  The print also shows several vehicles, among them a stage coach, on top of which passengers are seated.

Inns also had a number of important functions for locals living in their vicinity: they were communal sociable venues, had assembly rooms for dances and meetings, even jurisdiction; they held auctions, were involved in sporting events, and were central to local election campaigns. They were part of the emerging Habermasian public sphere and essential to communication in urban and rural communities.7 Like coffee-houses, they facilitated encounters between individuals and groups from different social strata, professions and geographical regions, or different political as well as religious backgrounds. Unlike coffee-houses, inns catered for a male and female clientele. Eighteenth-century novelists such as Henry Fielding and Tobias Smollett happily drew on the inn's potential as a literary setting and used it as a backdrop to chance encounters and as a symbolic microcosm of society.8  Inns also figured regularly in travelogues.

The range of inns a traveller might encounter in the course of a journey and the quality of food, drink, and accommodation varied substantially. Recently, Daniel Maudlin has argued for the category of the ‘principal inn’, the place of ‘polite sociability’, which was at the centre of smaller towns, whereas larger towns could possess several such principal inns.9  This specific type of establishment stood in the town centre, both architecturally and metaphorically; it was close to the town hall, market hall, church, and bank, and it catered for a local elite (Maudlin 8, 9). It offered a range of good food and wines, hosted assemblies, dances, meetings, even plays. Its association with the elite was underscored architecturally, sometimes through a classicist facade and / or luxurious interiors (Maudlin 14, 16).

The inn began to lose its importance with the advent of the railway in the nineteenth century and the subsequent revolution of the transportation system. As travelling took less time, fewer overnight stays were necessary and former coaching inns that were not in the proximity of the railway lost customers. Charles Dickens lamented the loss of this institution in his early novels in particular (for example, Pickwick Papers, 1836 - 1837) and celebrated the inn as the epitome of a bygone, idyllic Englishness.10  The factual decline of the ‘old’ inn coincided with the rise of the ‘new’ hotel. It is not clear to what extent these hotels were necessarily new institutions, instead of merely refurbished or renamed inns. Around 30 new ‘hotels’ existed in England between 1810 and 1840,11 places catering for well-to-do customers. Although the hotel as building type and as institution quickly acquired the reputation of being larger and more modern than the inn, the words ‘hotel’ and ‘inn‘ were nevertheless sometimes used synonymously. Around this time, large, purpose-built, and luxurious hotels, the precursors of the Grand Hotel at the fin de siècle, began to be erected in the United States. If the eighteenth-century inn remains a British icon, the nineteenth- and twentieth-century hotel has often been seen as an American institution.12

A large number of pubs and hotels in the present-day UK have nostalgically endowed themselves with the label ‘inn’, promising to provide visitors with the experience of what a stay in an old English establishment was like. It can be difficult to detect if a building that today is marketed as a centuries-old ‘inn’ actually served as such an institution in the past.

Truly old inns that can be traced back to the Middle Ages often possess several layers of architecture because older buildings were expanded, fitted with new fronts, refurbished, or partly rebuilt. The George Hotel in Stamford, situated on what once was the Great North Road, is an example of a surviving inn building that still retains much of its historical eighteenth- and nineteenth-century architectural structure, which it uses to market its present-day facilities.13  The building fabric of the famous Angel Inn at Islington, the model for Hogarth's ‘The Stage Coach or Country Inn Yard‘ (1747), did not survive: It was rebuilt in 1819/1820, became a hotel, and was rebuilt again in 1903. The present structure is the building of 1903.14 Its name has survived as a London landmark that gave its name to an underground station, a nodal point in the city's transportation system.