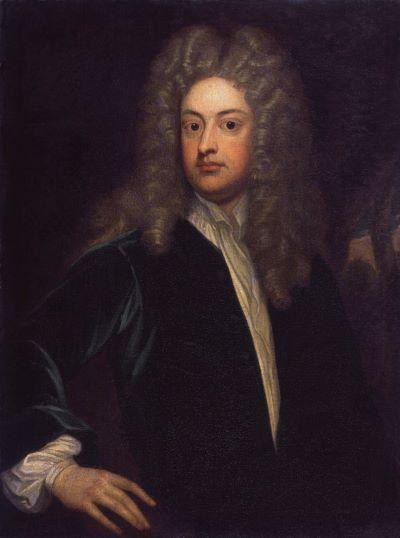 Joseph Addison was an important theorist of sociability best known for his essays published in The Tatler (1709-1711) and The Spectator (1711-1712, 1714). His essays promoted and exemplified an ideal of polite sociability that became extremely influential in the eighteenth century and afterwards. His prose style was often emulated by later periodical essayists and his character was presented as exemplary of the polite manners that he sought to describe and defend in his works. Addison was also well known as a prominent Whig politician and his literary style exemplified Whig political ideals and practices, especially after the consolidation of Whig political hegemony after the Hanoverian accession.

Joseph Addison (1672-1719) was an important theorist of English sociability in the early eighteenth century. He is best known for his contributions to the periodical essays, The Tatler (1709-1711), The Spectator (1711-1712, 1714), and The Guardian (1713), although Addison was also an accomplished poet and playwright as well as conducting a successful career as a politician. Addison composed a highly successful poem in praise of the Duke of Marlborough entitled The Campaign (1704) and the play Cato (1713), which was a surprise hit on the London stage and remained one of the most popular plays of the eighteenth century. He served as a Member of Parliament for the constituencies of Lostwithiel (1708-1709) and Malmsbury (1710-1719) and held the offices of Chief Secretary for Ireland (1708-1710; 1714-1715) and Secretary of State for the Southern Department (1717-1718). But it was his work as a periodical essayist for The Tatler and The Spectator that brought Addison his greatest acclaim both in his own life and posthumously.

Born into modest gentility as the son of the Dean of Litchfield, Lancelot Addison (1632-1703), Addison was educated first at Charterhouse School, where he met his lifelong friend and collaborator, Richard Steele, and later at Oxford University. After matriculating at Queen’s College, Addison was elected to a fellowship at Magdalen College, Oxford in 1689, just after the Glorious Revolution. During his time at Magdalen, Addison befriended the ambitious young cleric, Henry Sacheverell, who would later become a highly controversial Tory preacher in Queen Anne’s reign.1 Addison’s own politics, however, remained resolutely Whig and his political career owed much to his connections to members of the Whig Junto such as John, Baron Somers, and Charles Montagu, Lord Halifax.

Addison’s political affiliation remained with the Whig party throughout his life. His loyalty to the Whig cause served him well both in his lifetime as well as after his death. Addison’s political success owed less to his service as a MP or as an office holder than it did to his work in developing a Whig political ideology that was well suited to the party’s newfound position as the natural party of government after the Glorious Revolution. Addison’s writings articulated a new vision of Whig politics. He focused less on opposition to the crown and a fear of the encroachment of Popish tyranny on English liberties that had been at the heart of late seventeenth-century Whiggery and much more so on promoting moderation, trade, and sociable manners unmarred by the religious divisions that had spurred the development of the party in the age of Charles II and James II. In his periodical prose writings, Addison presented a social vision in which commercial prosperity and moderate Christianity provided the foundation for a peaceful and sociable future; this proved to be a popular foundation for a workable political consensus for the rest of the eighteenth century, and particularly after the Hanoverian accession in 1714.2 In conjunction with the somewhat more rarified and elitist vision of his contemporary, Anthony Ashley Cooper the third Earl of Shaftesbury, Addison helped to develop the ideological foundations for a ‘culture of politeness’ that would achieve hegemony in the age of Whig oligarchy.3

Addison promoted a vision of sociability that was urbane, polite, progressive and Whig. For these reasons, he has sometimes been misunderstood as a proponent of ‘middle class’ or ‘bourgeois’ ideology.4  Such terms were foreign to Addison’s vocabulary, but he did believe that commerce had an important place in English society and there was little sense in Addison’s work that trade was a degrading or disgraceful activity. His social vision was nevertheless hierarchical. He supported the constitutional monarchy established after the Glorious Revolution; he cherished the social and cultural supremacy of the aristocracy and gentry and provided one of the eighteenth century’s most enduring gentry role models in the figure of his fictional character, Sir Roger de Coverley. Addison enjoined commoners to emulate their social betters, and to join them in his celebration of politeness.

Politeness is a key word in Addison’s vocabulary. He saw politeness as a form of social and cultural achievement. Politeness was social because it was based on manners, and especially the customs and mores that governed interactions between individuals and made them civilized. Politeness was cultural because it was also expressed through linguistic, visual and musical artistry. Politeness distinguished civilized people from rude, uncultured barbarism. In his periodical essays, Addison enjoined his fellow readers to embrace modern politeness in both their manners and their culture. He famously told his readers that his writings ‘shall endeavour to enliven morality with wit, and to temper wit with morality’ (The Spectator, n° 10, 12 March 1711). Tempering savage wit was key to Addison’s polite reformation of manners. He sought to restrain the impulse towards vicious satire that had been characteristic of Restoration-era literary expression. Addison’s polite wit was designed to be complaisant. ‘Good nature is more agreeable in conversation than wit, and gives a certain air to the countenance which is more amiable than beauty’, he pronounced (The Spectator, n° 169, 13 September 1711).

This pairing of pleasant entertainment and morality proved to be a successful recipe. Long after his death, Addison’s essays served as a guide for sociable behaviour and his friendly but stoic literary persona provided an example of polite sociability. Addison (or at least the Addisonian ideal) became the kind of person that others strived to emulate in the eighteenth century. He served as a role model. By the early 1760s, the young James Boswell could jest with his friends about their mutual desire to resemble Addison and Boswell confided to his journal that he ‘felt strong dispositions to be a Mr. Addison.’5  Addison extolled the virtues of modesty and a circumspect sociability: ‘True happiness is of a retired nature, and an enemy to pomp and noise; it arises, in the first place, from the enjoyment of one's self, and in the next, from the friendship and conversation of a few select companions’, he declared (The Spectator, n° 15, 17 March 1711).

With regard to his own sociable practices, Addison was well known for his friendliness, if not perhaps for his volubility, in company. Lady Mary Wortley Montagu, who boasted of having spent much time ‘with the wits’, recalled that ‘Addison was the best company in the world’. When looking back upon his time as a part of Addison’s London literary circle during the last years of Anne’s reign, Alexander Pope recalled that Addison regularly met ‘his party’ at Button’s Coffeehouse, and he ‘stayed five or six hours – and sometimes far into the night’.  Before he married Lady Warwick, he would breakfast with one or another of his ‘chief companions’ at his lodgings in St. James’s Place, before dining with them at Button’s or a tavern. According to Pope, ‘this was then the usual round of his life. He ate full and drank his two bottles a day’. Later in the eighteenth century, Richard Hurd, Bishop of Worcester, remarked that ‘although Addison was timid and shy in public companies, yet no man was a more interesting companion in private’. Pope noted that ‘Addison was perfect good company with intimates and had something more charming in his conversation than I ever knew in any other man. But with any mixture of strangers … he seemed to preserve his dignity much, with a stiff sort of silence’. Edward Young reiterated this impression: ‘Addison was not free with superiors, rather a mute. When he began to be in company, he was all so himself, or he went on in a noble stream of thoughts and language, and all the company were fixed in hearing him’.6

Unlike other contemporary theorists of sociability, such as the third earl of Shaftesbury, Addison’s polite social ideal was distinctly heterosocial: he believed that interactions between men and women improved the manners of both sexes. He thought that ‘women were formed to temper Mankind, and sooth them into Tenderness and Compassion; not to set an Edge upon their Minds, and blow up in them those Passions which are too apt to rise of their own Accord’ (The Spectator, n° 57, 5 May 1711). In this way, Addison’s sociable ideal had an important influence on later theorists of polite sociability, such as David Hume, who also believed that heterosociability was a hallmark of polite culture.7

Addison’s ideal of polite sociability is epitomized in what is perhaps his most famous sentence:  ‘It was said of Socrates, that he brought Philosophy down from Heaven, to inhabit among Men; and I shall be ambitious to have it said of me, that I have brought Philosophy out of Closets and Libraries, Schools and Colleges, to dwell in Clubs and Assemblies, at Tea-tables, and in Coffee houses.‘ (The Spectator, n° 10, 12 March 1711) He imagined a society in which learning and moral improvement were widespread and sociable. Politeness should be philosophical, but it was not meant to be cloistered away in universities or monopolized by the clergy. It should prevail in cities as well as the countryside. It should be worldly but not vulgar; it should be popular but not demotic. To the contrary, it strove to bring the best of human wisdom and the most exemplary of moral precepts to everyone. It would not be the preserve of one sex, but rather would be enlivened by the sociable interactions of men and women when brought together.

This may explain why Addison chose to write periodical essays, as they were distributed regularly (six days a week) to coffeehouses and wealthy households throughout Britain. They would be read regularly by men and women throughout the British Isles. In collected form, Addison’s essays would be published as a set of volumes that would be reprinted constantly throughout the eighteenth century. In the early nineteenth century, Nathan Drake would declare that Addison and Steele were the ‘two mighty orbs’ who were the true ‘fathers and founders of Periodical Writing’, in his Essays, Biographical, Critical and Historical (1805).8