Joseph Farington (and his diary) 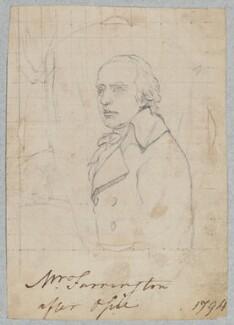 The Diary of Joseph Farington offers a rich source for thinking about sociability in the art world in London from 1793-1821. Nonetheless, it is striking that, while the Diary records a great deal of information – indeed ‘gossip’ - it seems as if this is of a rather distinctive character and suggests that a different sociability existed between men than among women.

Between 1978 and 1984, Yale University Press published a 16-volume edition of the diary of Joseph Farington (1747-1821) the landscape painter. A final volume containing a compendious index subsequently in 1998. The diary starts in July 1793 and continues with very few lacunae until shortly before his death in 1821. It is an extremely rich resource for the period, especially for his extensive contacts with the art world, and for his interest in the lives of the people around him. And it gives us a window onto late Georgian masculine sociability that is unrivaled for the period.

Farington’s extensive networks were not inherited from his family but developed alongside his career in the art world. His father was a vicar in Lancashire, three of his six brothers were largely engaged in the East India trade, one became a vicar, and a younger brother whom he had tutored subsequently trained as an artist specializing in history painting under Benjamin West. Farington was educated in Manchester and then sent at the age of 16 to work in the studio of Richard Wilson (1713-1782) who specialized in landscape paintings, many of which circulated widely in engravings made of the paintings. Farington immediately attracted praise (and premiums from the Society of Artists) for his work. When the Royal Academy was founded in 1768 he joined their school, and he was elected an associate in 1783 and a Royal Academician in 1785. In 1776 he married into a branch of the Walpole family, which certainly did not harm his connections. In 1793 he was sent abroad by William Windham to undertake sketches for an official record of the siege of Valenciennes. When his wife died in 1800 he had a brief breakdown but subsequently painted little or nothing until after 1813. After his recovery he made a further trip to Europe during the Peace of Amiens, with several other members of the Academy. While he ceased painting he maintained a wide range of activity, also becoming a member of the Society of Antiquaries, and although he never held a major office in the Royal Academy he served widely on a range of committees. If his own career remained rather stunted, it is clear that his position in the art world allowed him to develop an extraordinary range of acquaintance.

Reading Farington’s diary today, the word that springs to mind to describe much of its content is ‘gossip’. It seems clear that he spent a lot of time talking about and writing up reports of other people’s behavior, gleaned from his conversations with others. We might think that this is part of a circulation of information that is an essential component of sociability and the maintenance of social norms, but one feature of Farington’s diary that renders it more puzzling is that a good deal of the information seems to have stayed in the diary where he entered it.

For instance, John Taylor, in Records of My Life (1832), in discussing the first wife of painter John Opie, who had absconded from Opie with a Major Edwards, who subsequently married her, apologized for her conduct on the grounds that Opie had been so engaged in making his career. Her ‘fall’ was the result of ‘Unavoidable neglect plus the persevering attention of a gallant’. He went on to say ‘I am well acquainted with her, and introduced my former wife to her, which assuredly I would not have done if I had observed any incorrectness of conduct or manners’.1  The remark exhibits a latitude we might not expect, but also demonstrates Taylor’s normative surveillance of his wife’s acquaintances. Taylor was an associate of Farington but was clearly not privy to Farington’s information (from the painter Robert Smirke) that the first Mrs Opie had already had two illegitimate children when Opie married her – something of which Opie was equally unaware. The children were raised elsewhere but when the son was arrested in his teens for stealing a watch and incarcerated in Newgate, he discovered his mother’s address and wrote to her asking for assistance. According to Farington, she refused and told him he would destroy her life if it were known that he existed. Farington presumed that, since it was a first offence, he would escape execution, despite being sentenced to death, and would be transported instead (but, like so much in the Diary, he does not follow this up for us!).2  Farington clearly did not make it his business to spread information, or Taylor would have had a different attitude. Indeed, he seems to have hoarded it.

His diary gives us a cumulatively rather unattractive picture of Opie, together with a powerful sense of how men tended to stand together. While Opie’s divorce was being finalized Opie met a young woman, Miss Booth, with very good financial prospects (£4,000 pa), and he engaged her affections. He asked Farington to plead his cause with the father (a lawyer), who he thought likely to be obdurate. Farington initially refused, suggesting it might be prudent to wait until the divorce was completed! Once that was achieved, Opie repeatedly came back to Farington and succeeded in engaging him to act for him with Booth who was, as predicted, unhappy about his daughter being united to a painter of uncertain means. The struggle to secure Miss Booth went on some time, until, it seems, her friend Hily Addington helped her see how potentially imprudent the match might be (The Diary of Joseph Farington, III, 704 et seq to 64).

Within a matter of months Opie had turned his attention to Amelia Alderson, although he had also clearly at least reflected on the possibility of marrying Wollstonecraft and had also pursued a Miss Bentham briefly (The Diary of Joseph Farington, III, 705-706). Amelia’s father, Dr Alderson, was clearly concerned about aspects of the match, and while Amelia seemed to be happy with her choice, her husband kept her on very short quarters. When Opie died suddenly in 1807, she was amazed (as were his friends) to find that he had over £12,000 squirreled away. Farington records all this en passant but there is no sense that he owed these women anything, or that he should have reprimanded the men involved (his advice to Opie seems entirely based on what he thought would help him best achieve his (fluctuating) objectives). This raises some important questions about male ‘gossip’.

There is an issue about whether ‘gossip’ is the right word. It is not much in evidence in the period as an abstract noun and it was still commonly used to describe a person with some relation – as in Samuel Johnson’s definition as ‘one who answers for the child in baptism’. But the abstract noun is clearly already implicit in Johnson’s ‘One who runs about tattling like women at a lying in’.3  But many features of two types of gossip are evident in the period. The first is akin to our own ‘celebrity gossip, rumour and scandal’ conducted largely by people who ‘know of’ but do not ‘know’ the people involved.4  It has few costs to those engaging in it, it is often bonding and pleasurable to those who engage in it – either because it is slightly salacious and/or because it has a levelling quality. It might also play a role in providing material to help create exchanges between people who lack other interests and concerns in common, much like the encounters of countrymen abroad.

The second form of gossip is more intimate: you gossip about people you know, to people who know them, and the likelihood is that the people who are being gossiped about know that they are being talked about. Functionalist accounts in anthropology tend to stress the value of gossip as a form of collective policing of intimate social groups, with strangers being excluded because they lack knowledge of the principals (and, more crucially, lack any social relationship with them).5  This underlines the intimacy required for participation and is in sharp contrast to ‘celebrity gossip’.

Clearly, conversation may involve the passing of social information without any moral judgment; but as gossip it involves a normative judgement which has consequences for one’s interaction with the subject, ranging from point scoring, destabilizing a person’s position within a group, or regulating their standing.  Such gossip may also be important for signalling to one’s closest connections (especially one’s family) areas of their vulnerability to social reaction or condemnation and in attempting to impose conduct on (or disguise the conduct of) members of one’s most intimate circles. In this last category we should also distinguish what we might call ‘grooming gossip’ – in which people ensure that the conduct of family members and close acquaintance is up to scratch (with those criteria being set by standards notionally shared by the family group and the wider community of intimates); and collective reputation gossip, where the concern is to ward off wider social reaction by monitoring and reacting to behaviour that threatens the group’s reputation. In the former case this is essentially an intra-group activity. In the latter, it is open to wider participation, although often with the aim of shutting this down. Again, we need to recognize that this is not, except in very rare cases, activity that is open to all and in which all perspectives are equally salient: non-celebrity gossip circles have delimited numbers of participants, and their anxieties are directed to particular reference groups.6

Gossip may also have instrumental dimensions – knowing something about someone makes it easier to get them to do things you want them to. At least some male gossip in this period seems to fit this category. Farington, for example, may have used his knowledge to influence decisions about the distribution of patronage by the Royal Academy. But despite being an inveterate collector of information, he does not seem to have used that information to control or influence the behaviour of others. In particular, he kept quiet about what he knew about other men, while nonetheless recording and hoarding the information.

One possible conclusion we might draw is that gossip operated differently in male and female sociability. Women were judged by those with whom they associated, and that underlined for them the importance of conforming to conventional norms and expectations. If we follow Engel’s suggestion that ‘gossip centers on areas where the cultural ideal is demanding and creates stress’ (Merry 279), it is clear why women might have participated more systematically. Men, on the other hand, seem, for the most part, largely to ignore the sexual and personal conduct of their associates, even if they did not actually condone it. Over and over again, men were able to act unconventionally while escaping censure from their male contemporaries (although women might become reluctant to be associated with them). In male circles, men were accepted for their wit, talents, conversation, shared commercial or professional interests or simply their company. Their behaviour (past or present) outside these masculine convivial worlds was not of much relevance to their acceptance by them. That was not something that women could accord other women. Rank and money or other manifestly superior resources, could buy latitude or force acceptance; but otherwise, gossip was a key form of intra group and boundary control (Merry 286). Male diaries from the period suggest this was simply very different for men.

Farington’s Diary is an extraordinary resource for students of the thirty years after 1793 but, like many such resources, it needs attentive reading if we are to understand the underlying currents that shaped the sociability of their writers.