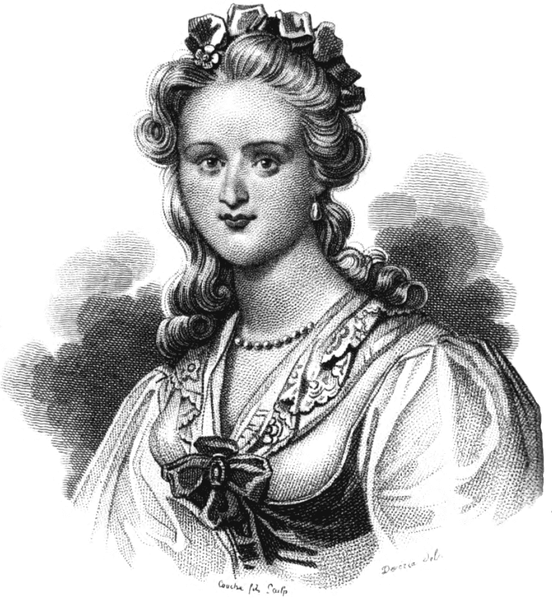 England held a special allure for French readers. This attraction is evident in the titles Marie-Jeanne Riccoboni gave to her novels as much as in the names of her characters. Her correspondence with David Garrick and Robert Liston also reveals the fundamental role sociability played in both the circulation of theatrical works between the two countries and in the evolution of eighteenth-century theatrical creation.

Marie-Jeanne Riccoboni, née Laboras de Mézières, was born in Paris on October 23, 1713. At the age of 21, she married François Riccoboni, the son of the director of the Comédie-Italienne in Paris, embarking on a theatre career she would abandon at the age of 43 for one in literature. In 1757, she separated from her husband and took up residence in Paris with her friend, former actress Thérèse Biancolelli, on rue Poissonnière. The titles she would give to her novels reflect the enthusiasm French readers had for English literature, and the strong ties that united the two countries. The vibrant network of epistolary sociability which thrived during the Enlightenment would form the underpinnings of her enduring friendships with David Garrick and Robert Liston.1

Riccoboni was a voracious reader of Samuel Richardson, Edward Young, Joseph Addison, and Alexander Pope. In Paris, she also rubbed shoulders with figures such as Richard Burke, David Hume, Adam Smith, and Philip Changuion, the British ambassador to France. In 1765, she entered into correspondence with the well-known actor, playwright, and theatre manager David Garrick, whom she had met during his visit to France. In 1766, she began corresponding with the future diplomat, Robert Liston, who had accompanied the children of Gilbert Elliot to the French capital as their tutor. Both would be long and fruitful exchanges.

Garrick, who had inspired Diderot to write Paradoxe sur le Comédien (Paradox of Acting), shared Riccoboni’s passion for the theatre but also provided her with access to a valuable distribution network. Her novels were highly popular in England and were frequently pirated. Garrick introduced Riccoboni to the bookseller, Thomas Becket (Mme Riccoboni's Letters, Lettre du 20 novembre 1770, 164) who would publish English translations of most of her novels (Mme Riccoboni's Letters, Lettre du 1 novembre 1772, 277). It seems she was not entirely satisfied with Becket’s services, however, as in many of her letters, she complained that he was insufficiently invested (Mme Riccoboni's Letters, Lettre du 29 juillet 1765, 49). At Riccoboni’s request, Garrick and Becket used the proceeds from the sale of her translated novels to purchase and then send her several British plays as well as a detailed catalogue of the shows staged at the Drury Lane and Covent Garden theatres. As Riccoboni lost interest in writing novels, she sought inspiration in the plays from across the English Channel, with strictly British plot lines or national fairy tales.

Her correspondence with Garrick, spanning a 12-year period from 1765 to 1777, underscores the close relationship between Franco-British sociability and theatrical production in the eighteenth century. In 1767, their exchanges would spark a debate on national prejudices, and in 1769, a quarrel over British theatre. The disputes between the two epistolarians touched on both the private and public spheres, and would test the strength of their bond.

In 1767, frustrated with Tobias George Smollett’s critical depiction of the French as frivolous and prattling in Travels Through France and Italy, Riccoboni countered in her letters that the British, like any other nation, had its own share of unsavoury attributes. To make peace with Garrick following her comments, she admitted, echoing Hume—during a visit to Paris in 1764, the philosopher had gifted Riccoboni with a copy of his History of England—, that humanity, despite their differences, were all motivated by the same passions. In 1769, tensions once again welled up when Garrick took offence at his friend’s remarks in her preface to the first volume of Nouveau Théâtre Anglais. Riccoboni held Garrick’s compatriots entirely accountable for those observations, expressing her dismay at the ‘vicious, hateful characters’ British playwrights presented to the public (Mme Riccoboni's Letters, Lettre du 3 mai 1769, 148). She surmised that it was due to the sociological nature of the spectators since, in Britain, nobles despised comedy, which was the realm of the bourgeoisie. She nonetheless asserted that, although the taste for such characters was assuredly British, the emotions they betrayed were universal.3

Nature, truth, and sentiment are equally prized by British, French, Russian and Turkish natives. Yet wit, banter, repartee, and light-hearted pleasantries do not strike the same note in every climate… What might cause open-hearted laughter in France might be jeered in London or in Vienna. In all places, a jest is judged on nothing at all, and this nothing is geography. Generally speaking, those who make it their business to translate have precious little appreciation of these delicate nuances. I have yet to find a translation I could stomach. (Mme Riccoboni's Letters, Lettre du 7 septembre 1768, 128)

The correspondence she exchanged with Garrick and Liston over some twenty years is a testament not only to the friendship that united them, but also to the Franco-British sociability that drew its vitality from the vast literary and theatrical production of both countries. Riccoboni was not a woman of the salons—she was a woman of letters who found, in the epistolary dialogue, the perfect complement to the art of conversation. Though she was not fond of Richardson’s novels, nor the ‘rage for sensibility’ that had conquered Paris,4 her stories of British heroes and heroines prove that she was well and truly ensnared in the craze for Anglomania. Her friendships with Garrick and Liston, punctuated and fuelled by fallings out and reconciliations, also reveal how Franco-British sociability provided particularly fertile ground for literary creation.