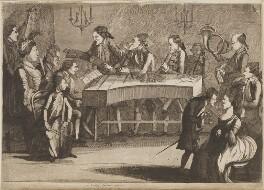 The ‘Sunday evening musical parties hosted by Dr. Burney’ were informal gatherings of musicians as well as writers, actors, and painters, in order to perform in and listen to concerts, given by both amateurs and some of the most brilliant singers and musicians of the day. The setting was a domestic one, and its participants – performers as well as audience – visited in their leisure time, by invitation or inclination depending on their status and intimacy with the family. There was ample room, figuratively at least, for sociability, since music-making was only part of the entertainment, and conversation also took up a fair amount of time. As in the Bluestocking salons, members of the aristocracy freely mixed with the talented, and women, musicians as well as visitors, participated on an equal footing with the men.

And yet, the Burney salon can be situated somewhere on a continuum between the private and the public sphere, between literary and musical entertainment, even between work and leisure: ‘Pleasant as salon gatherings certainly were, they were not mere leisure activities created to while away the hours or as relaxation from serious work or business’, Dena Goodman cautions.3  Dr. Burney was certainly not a man of leisure, giving lessons from morning to night, and he did not initiate these soirées to while away a few idle hours.4 Goodman argues that Enlightenment salons ‘served purposes of social mobility’, and this was true also of the Burney gatherings: Dr Burney aspired to establish himself as a gentleman, and to do so, he needed to show he was accepted by literati as well as artists, and by the upper middle classes (Goodman, p. 330). The move from Queen Square to St Martin’s Street in 1774 was a strategic decision, as his daughter Frances admitted several decades later in the Memoirs of Dr. Burney: the house had once belonged to Sir Isaac Newton and Sir Joshua Reynolds lived around the corner.5  At the time, Dr Burney, himself an enthusiastic amateur astronomer, had begun to make a name for himself with his volumes on The Present State of Music in France and Italy (1771), but only with his second book, The Present State of Music in Germany, the Netherlands, and the United Provinces (1772), which was geared to non-specialist readers, did he gain access to literary circles: ‘My publication was honoured with the approbation of the blue-stocking families at Mrs Vezey’s [sic], and Mrs. Montagu’s, and Sir Joshua Reynolds’s, where I was constantly invited and regarded as a member’.6  At the same time, he was still busily collecting material – and financial support – for his masterpiece, the General History of Music (1776-1789), and maintained his family by giving lessons on the harpsichord to the daughters of the more affluent, ‘giving as many as fifty-seven lessons a week’.7  Although the Sunday concerts were leisure in some respects, they also meant business: the higher the reputation of Dr Burney’s soirées – that is, of the people who attended as well as those who performed – the better for his career. He does not seem to have performed himself during these evenings, though his daughters Esther and Susanna and his son-in-law Charles Rousseau Burney frequently did (The Early Journals and Letters of Fanny Burney, II, 77; 187).

Most of our information concerning these musical parties comes from the journals and letters of the Burney daughters (the novelist Frances Burney, later d’Arblay, and her younger sisters Susan and Charlotte). The Burneys were well aware of the reputation of their visitors, and they were equally aware of the fact that the lives of most of those would eventually be of interest to the public. Figuratively and literally, the Burney daughters’ journals were written in a closet before the family’s move to St. Martin’s Street in 1774, but in Newton’s Observatory thereafter. Their descriptions of these musical parties vary according to the eminence of the musicians present, and what was sometimes described as a more or less private family concert could quickly turn into a semi-public performance in front of a learned audience, if a knowledgeable visitor came to listen in, or a long-awaited singer deigned to perform. Thus, Signora Agujari made them wait almost four months from her first visit to a Sunday evening on 2 March 1775, during which she commended Esther Burney’s play on the harpsichord, before she finally agreed to sing in June. Frances reported the dilemma: ‘We were all of us excessively eager to hear her sing, but as it was not convenient to offer her the Pantheon-price of 50 Guineas a song, we were rather fearful of asking that favour’. In June, though, ‘She came before 7 – & stayed until 12, & was singing almost all the Time!’ (The Early Journals and Letters of Fanny Burney, II, p. 75, 154).

The entertainment was generally two-fold: first, musical performances were enjoyed by at least some parts of the audience and afterwards conversation followed, facilitating sociability (The Early Journals and Letters of Fanny Burney, I, xxi-xxii). In his review of the Diary and Letters of Mme d’Arblay, Thomas Babington Macaulay was astonished, not to say shocked, at the fact that Dr. Burney allowed his children ‘to mix freely with those whom butlers and waiting maids call vulgar’, but the noblemen who also attended these musical soirées seem to have impressed him much more than they did the Burneys, who enjoyed reflecting on the mix of people they saw.8  According to Susan, one day they ‘had a very Singular party – Italian, French, Irish, English – Jews, Protestants, Catholics, Deists – What Not! … I was extremely well entertained’.9  Gasparo Pacchierotti, whose company was sought by all London, frequently sang during Dr Burney’s musical evenings, but he did not feel pressured to perform, and what is more, he felt that his art was truly appreciated, and he himself regarded as an artist and a gentleman. ‘As for those of high rank,’ he told Susan, ‘I’m less at ease with them than you might think – I’ve never enjoyed the pleasure of genuine conversation or friendship with them – the moment I see them they want me to sing’.10  Susan, so familiar with foreign modes of gentility, had experienced the difference between politeness and presumption:

‘Mr Barry called – & talked Morality & Philosophy with my Mother – but told her, when she made use of the latter word, He did not know he had been talking Philosophy – ‘But, for my part, added he, ‘I think the name is all that alarms in Moral Philosophy – for I don’t find that I know more of the matter than Miss Burney – or Miss Charlotte – or any other Lady’ – Intending I really believe to be very civil he makes these sort of Speaches eternally, which most Foreigners would regard as ridiculously impolite.‘11

The Burney ‘salon’ illustrates how difficult it is to distinguish between public and private gatherings in the eighteenth-century, and it is important to keep in mind that, as Lawrence Klein explains, ‘the private and the public did not correspond to the distinction between home and not-home. [...] [P]eople at home, both men and women, were not necessarily in private’.12  These gatherings may not compare to other literary salons in their general project of furthering the Enlightenment; they may not even qualify as a ‘salon’ when compared to those of the Parisian salonnières or the Bluestockings, but if one follows Dena Goodman’s definition, they should be accepted as a musical equivalent: ‘What distinguished salons […] was not only their conception of intellectual activity as useful work, but also the mixing of ranks and orders’ (Goodman 338).13  This was very much the case at the Burney concerts – with the addition of musical to intellectual activity. In the end, what made the salons and the epistolary networks that passed through them institutions of Enlightenment sociability may not have been the people who sought to control them, but the principles that underlay and structured them: the social and intellectual principles of reciprocity, equality, debate, and exchange (Goodman 349-350). The informal, easy-going implementation of these principles was certainly a hallmark of the Burneys’ musical evenings.