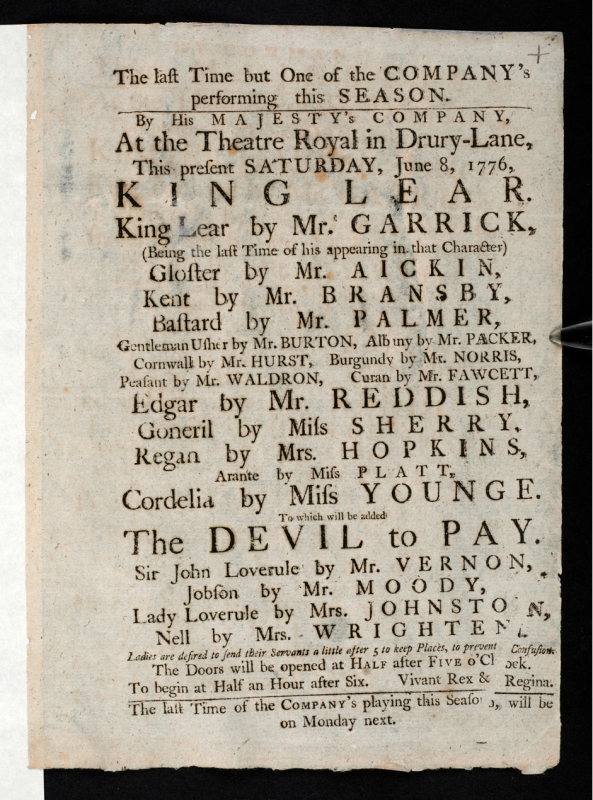 More than just simple adverts for the theatres, the ‘playbill’ or ‘bill of the play’ had a significant role in sociability throughout the eighteenth century. On the London stage, in provincial theatres, and even in private theatricals, playbills were an established mode of communication between the theatre and their audiences. The document’s primary function was to provide information about who, and what, was on the stage. Nevertheless, it retained a sociable function past the performance event, as an object of fascination for collectors and their associates.

Ancestors of the theatrical programme, playbills were a common sight throughout the seventeenth and eighteenth centuries.1  They were generally a single sheet listing a coming night’s performances for a theatre or group, produced on the day of the performance, and then distributed to potential audiences, with some also available for sale during the production. They were mostly on paper, but sometimes silk or satin playbills would be produced for the Royal boxes, other special occasions, or private theatricals.

By the end of the eighteenth century, playbills proliferated in the London streets. In the introduction for The London Stage, it is suggested that by the turn of the nineteenth century, Drury Lane was producing around 187 great bills for each of their performances.2  These large bills were produced in red and black ink and pasted on walls around the city for the viewing of passers-by. Yet, they are likely greatly outnumbered by the smaller handbill, which was sold both in and outside of the theatre. Despite their apparent ubiquity, comparatively few playbills survive today. Although they eventually became popular objects of collection, these paper playbills were not designed to last.3

Playbills were crucial tools of communication between the theatres and what Christopher Balme has termed, the ‘theatrical public sphere’.4 This public sphere, composed of both intended and actual audiences, looked to playbills for information about upcoming performances and feedback about previous ones. The minutiae of the playbill’s design varied, but from the mid-century onwards London playbills for theatres like Covent Garden and Drury Lane tended to include similar information: the names of plays, the names of players, the location, whether the performance was a benefit or a new production, and how to purchase tickets.5

Another common convention of the playbill was to provide feedback or some report regarding an audience’s reactions to performances. For example, a Covent Garden playbill from 9th February 1815 reports that Miss O’Neill’s performance of Mrs. Haller on a previous night ‘excited the strongest and most affecting interest—the audience expressed, in acclamations, their rapturous delight’.6

As contended by scholars such as Jacky Bratton, Christopher Balme and Gillian Russell, although playbills are undoubtedly useful to scholars for their documentary quality, they also offer insights into the wider sociocultural context of eighteenth-century theatre.7  The playbill makes visible the social interactions between theatres, actors, actresses, and audiences, both in its content and its typography. The physical proximity of names on a playbill implies the proximity of such individuals within the sociable network of the theatre.8  The positioning and sizing of names also suggests something of a certain player’s interactions with their audience. On the playbill, star performers can be recognised by the position and size of their name. As an actor or actress’s social capital waxes and wanes, their name moves up and down the playbill until eventually, it falls off altogether.

The material object of the playbill was implicated in a variety of sociable interactions. For example, larger great bills could become the subject of conversation on the city’s streets. In her memoirs, actress Charlotte Charke talks of the joy she felt 'not only in reading the Bills, but sometimes hearing [herself] spoken of' by passing spectators.9  Smaller handbills, which were more portable than great bills, could be found scattered on the floor, on tables in coffee houses, or pinned to cushions within the theatre itself. Within the sociable coffeehouse, they were catalysts for conversation regarding the latest playhouse drama, both on-stage and off. Playwrights and actors were regular patrons at coffeehouses and the physical presence of playbills in these locales stand as representative of the theatre’s significant role in sociability.

Handbills were sold within the theatre itself by orange-sellers, but patrons could also take along their own, sourced from one of the various theatrical periodicals which remediated and reprinted the information on playbills. Some early nineteenth-century examples include the Theatrical Observer (1821-30) and The Tatler (1830-32). They offered purchasers a playbill with an adjoined review of the performance on the back. The combination of bill and theatrical criticism allowed purchasers to publicly exhibit their expertise to fellow theatregoers. The Tatler explained their decision thusly: ‘If a play-goer has a party with him, especially ladies, the purchase of a bill gives him an opportunity of shewing how he consults their pleasure in trifles.’10  This notion of the playbill as a tool for being socially observed was explored in fiction. In Maria Edgeworth’s The Absentee (1812) Lady Dashfort is outraged when she notices Lady Isabel watching the play and reading the playbill instead of using the bill as a prop for the performance of being seen by Major P: ‘Isabel, child, with your eyes on the stage? Did you ever see a play before? Novice!’, she exclaims, ‘now her eyes have gone down to her play-bill! Sir Harry, do take it from her.’11  Distracted by the spectacle of the play and its playbill, Lady Isabel is at risk of bypassing the attention of Major P. As both an aide for, and distraction from, sociable looking, the playbill becomes implicated in both positive and negative sociability within the eighteenth-century playhouse.

Outside of the city, producers of private theatricals produced their own playbills as a way of invoking the inherent sociability of the stage. Playbills lent legitimacy to an amateur performance and encouraged a sense of shared knowledge and experience in audiences at a distance from the sociable and theatrical capital of London. Private theatricals put on at Wynnstay by Sir Watkin Williams Wynn in the 1770s used playbills to recreate, as far as possible, the experience of visiting a patent theatre. Sir Watkin’s performances were an important social event for the landed gentry of Wales, but also attracted audiences from further afield. The Wynnstay playbills include familiar aspects of London bills, including the use of variable size and uppercase type to give emphasis to certain elements. One bill dated 5th January 1779 uses uppercase type to highlight the performances of Coleman the Elder, who that year gave his first performances at Wynnstay as Russet in his own The Jealous Wife and Aircastle in Samuel Foote’s The Cozeners.12

It is likely that these bills performed a similar function to those of the patent theatres. Circulated amongst Wynnstay’s audiences, they both advertised upcoming performances and gave information regarding players and roles. Elsewhere, Russell has noted the ‘importance of the extra- or paratheatrical to the social phenomenon of private theatricals’. Within these spaces, such as Wynnstay, playbills constituted a crucial element of the replication of the ‘normative ritual’ of attending the Georgian theatre.13

This requisition of the playbill’s format for sociability outside of the London playhouse can also be seen within the realm of politics. Mock playbills were a popular mode for the satirising of current affairs or the lampooning of political figures, especially during election periods. These were usually initially published as fugitive pieces in periodicals but several were later printed as facsimile bills by jobbing printers.14  As argued by John Barrell, ‘By its sheer ubiquitousness, the language of theatre advertising could function as a language that addressed the polite and the vulgar much more efficiently than the language […] of formal political debate’ (Barrell 24).15  In one such example of a mock playbill from 1784, the subject of lampoon is the Duchess of Devonshire’s support for the campaign of Charles James Fox:

By Command of their Majesties

This Day will be presented

(Not acted these Three years)

The parts of Voters for the first candidate will be per-formed by a select Company of Land and Sea Forces.

Voters for the second Court Candidate, by the Tallow-chandlers, Bug-destroyers, Messengers, Scullions, and other respectable Officers of his Majesty’s Household, being their first appearance in these characters.

Genius of Beauty, Duchess of Devonshire.

Through an appropriation of the theatre’s dramatis personae, the bill parodies the social network surrounding the campaign of ‘Champion of Liberty, Mr. Fox’. This parody bill, like the many other examples from the eighteenth century, relied on both an understanding of the playbill as a form with a defined way of reading, and the construction of a sociable political community with whom the in-joke could be shared and appreciated.17

As a result of their ability to point to a particular historical moment—and their indisputable visual intrigue—playbills are a popular object of collection. Many surviving examples are available to scholars because of the work and dedication of collectors across the centuries like Sarah Sophia Banks (1744-1818), John de Monis Johnson (1882-1956) and Francis Bridgford Brady (1890-1981).18  In the eighteenth century, playbill collecting was ‘an integral part of more generalist collecting practices that situated the theater as part of associational culture as a whole’ (Russell 255). Collectors of playbills in the eighteenth century, like Sarah Sophia Banks, socialised and traded within interconnected networks of printers, publishers, theatre professionals, alongside other fellow collectors. The playbill’s links to sociability are also present in its exhibitions by these collectors. Banks held a regular salon at 32 Soho Square at which she may have discussed her collecting and James Winston—perhaps one of the century’s most prolific playbill enthusiasts—amassed a huge collection which, upon his death in 1843, was left to the Garrick Club, itself a hotspot of theatre-aligned sociability.

The playbill is both a typographical analogy for theatrical sociability, and an object of sociable interaction in its own right. Despite their categorisation as examples of fragile ephemeral print, playbills have endured as material symbols of the relationship between the theatre, sociability, and print in the long eighteenth century.

Gowen, David Robert, ‘Studies in the History and Function of the British Theatre Playbill and Programme 1564-1914’ (unpublished doctoral thesis, University of Oxford, 1998).