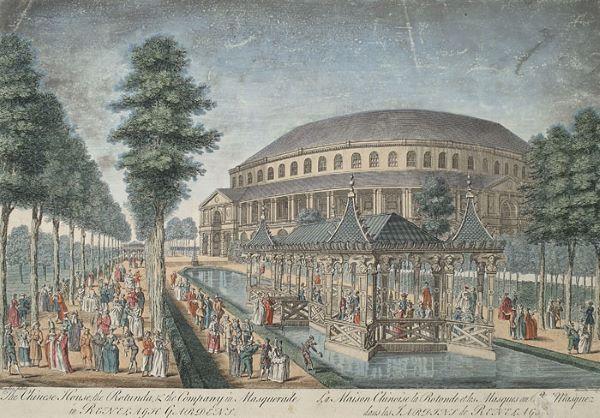 Ranelagh was one of London’s pleasure gardens, a typical eighteenth-century locus of sociability, which offered a mixture of social classes – suitably dressed people could attend – while retaining a flattering feeling of exclusiveness. It could gather the public for entertainments or for national occasions such as the conclusion of a peace treaty. The setting and ornaments contributed to familiarising the visitors with newly fashionable visual and musical culture: Italianate practices such as masquerades, exoticism with a Chinese pavilion, and concerts in the Rotunda which housed an orchestra. This created shared cultural references.

Ranelagh was one of the ‘pleasure gardens’, places of entertainment which flourished in the eighteenth century, where, for an entrance fee, the inhabitants could meet, dance and listen to music, attend shows, and have refreshments. They were on the outskirts of cities, offering both city pleasures and the delights of an excursion towards the country and its fresh air: Bath had Spring Gardens near the Avon, and York a planted walk on the banks of the Ouse, but the major gardens with entertainment kiosks were in London. The most significant feature of pleasure gardens, in the context of the times, was that they offered new modes of sociability, since among the visitors both members of the aristocracy and commoners could be found; people paying a small fee and acceptably dressed could enter, whereas other types of social occasion concerned specific social groups, for instance balls in the townhouses of the nobility or city festivities for the merchant classes.

The pleasure gardens offered new public spaces corresponding to Enlightenment forms of urban culture and sociability: places of ‘politeness’ – the new social ideal – and of shared refined pleasures and entertainment, with occasional patriotic celebrations such as a victorious declaration of peace. They afforded opportunities to enjoy the Georgian visual culture of surprising landscape vistas, displays of the commodities produced by the developing luxury crafts of the time, together with a culture of sociability based on mutual representation, since the visitors came not only to see all these shows but also to play their parts in the eyes of others.1

Ranelagh was to the south-west of London, near Chelsea Hospital for old soldiers, on the former grounds of Ranelagh House, the residence of the Earl of Ranelagh, who died in 1712. The pleasure garden opened in 1742. It charged higher admission prices (usually 2 shillings on ordinary days, and up to 2 guineas – 42 shillings – for masquerades) than the Vauxhall pleasure garden on the opposite south bank of the Thames (1 shilling), so as to be more exclusive, attracting more aristocratic or richer Londoners, as Vauxhall was increasingly frequented by a larger section of society. Advertisements of the time for Ranelagh favourably described the visitors as ‘nobility and gentry’: this was a way of differentiating the new garden on social grounds. Horace Walpole writes that the visitors would find the Prince of Wales and the Duke of Cumberland (another son of the King), but also ‘children from the Foundling Hospital.’ (Letter to Conway, 29 June 1744)

Ranelagh closed in 1803. Access was made easy by additional lighting on the road and horse patrols on ‘ridotto’ days – a Venetian term meaning ‘private place’ for social assembly, here meaning ‘special occasions of entertainment’ – the use of an Italian term being in itself evocative of the sociability of fashionable visitors sharing Italianate tastes. It was possible to cross the Thames on a wherry to reach Vauxhall on the opposite bank. The layout and ornaments would contribute to familiarise the visitors with newly fashionable visual and musical culture, thus creating a social bond between them through shared cultural references. It had a formal garden where visitors could take walks in the alleys, and a canal with a Chinese pavilion reflecting the growing taste for exoticism; at night, the garden was illuminated with lanterns. From 1767 there was a garden orchestra.

The most significant feature was the large Rotunda (150 feet in diameter) where the visitors could retreat on rainy days, and where concerts were given. The entrances were four porticoes; round the wall were two tiers of 52 boxes, each for a group of seven to eight people; above were 60 windows, and the room was also lit by chandeliers. The ceiling was blue with painted celestial figures in each panel. The central structure was first used for the orchestra, but later for fireplaces, whereas the orchestra was moved to one side, and an organ set up behind it in 1746. It was thus a spectacular place to meet people, with the added enjoyment of concerts.

Twice a week, a ‘ridotto’ was given, where concert and dinner were held for a higher price. Masquerades were given for special occasions such as the Peace of Aix-la-Chapelle in 1749, with disguised dancers in the alleys, music played from a boat on the canal, and shops selling wares from various countries; another special occasion was the ball for the birthday of the Prince of Wales in 1759 – national rejoicings uniting the population in addition to social occasions. Among the famous concerts given there is the one given by the eight-year old Mozart in 1764. There were fireworks sometimes. The ‘Etna’ show of volcanic explosions with Vulcan’s forge was added in 1792. Spectacle was thus a social bond, drawing on the current tastes for exoticism, on the popularization of recent science such as research on volcanoes and spectacular disruptive phenomena, as well as classical references and Italian masquerading, creating a shared culture.

Views by contemporaries were widely divergent2 ; in Smollett’s epistolary novel Humphry Clinker (1771), the melancholy uncle Matthew Bramble visiting London writes satirically about Ranelagh, ‘One half of the company are following at the other’s tails, in an eternal circle […] while the other half are drinking hot water, under the denomination of tea, till nine or ten o’clock at night, to keep them awake for the rest of the evening’, whereas his enthusiastic young niece Lydia writes that ‘Ranelagh looks like the inchanted palace of a genie [i.e. an Oriental supernatural character], adorned with the most exquisite performances of painting, carving, and gilding, enlightened with a thousand golden lamps, that emulate the noon-day sun; crowded with the great, the rich […]’ (31 May). The last words show that she is happy to be admitted to the haunts of the upper tiers of society, while marking the mix of social groups, both ‘great’ and ‘rich’ visitors (or seemingly so).

Ranelagh’s contribution to forms of sociability was that it offered a place for comparatively mixed yet exclusive social life, allowing contemporary cultural trends such as exoticism and new musical tastes to be disseminated to a fairly large section of the population while making its public feel connected to a restricted aristocratic society. This could be achieved through a culture of spectacle: visuality acted as a social bond.