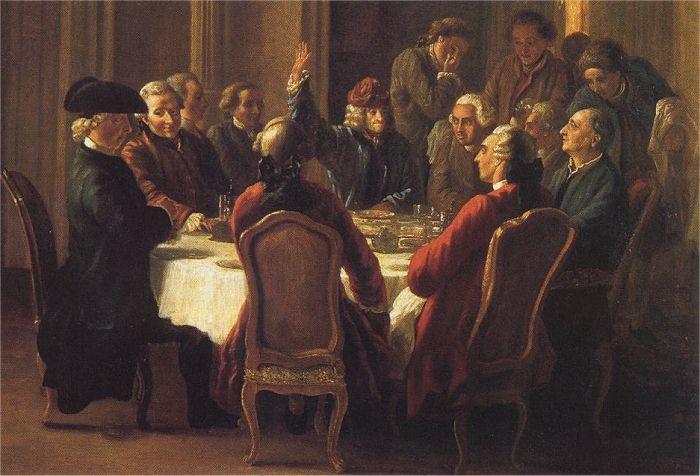 The Republic of Letters was an abstract intellectual community in the seventeenth and eighteenth-century that was comprised of numerous networks throughout Europe and the Americas. Correspondence was the defining feature of its existence, enabling the dissemination of ideas, new literary and philosophical manuscripts, and political news and pamphlets. But the erudite epistolary backbone of the Republic of Letters was also enriched by networks grounded in institutions. These included scholarly networks created by the academies, and social networks that met face-to-face, thanks to increased travel and social institutions such as the salons, coffeehouses, and masonic lodges.

The Republic of Letters was both an abstract ideal of a cosmopolitan, egalitarian community of scholars, and a very real, virtual community comprised of numerous networks throughout Europe and the Americas in the seventeenth and eighteenth -centuries. Not unlike our own contemporary world of individuals all over the world communicating with one another through digital social networks, early modern individuals such as Benjamin Franklin, Voltaire, David Hume, Cesare Beccaria, and Madame du Deffand maintained active communication by writing letters to their vast numbers of acquaintances in an exchange of news and ideas.

The idea of a ‘Res Publica Litteraria’ dates back to antiquity, and was also alive and well during the Renaissance.1  In an early explicit reference to this community in the emerging scholarly communities of Renaissance Italy, Francesco Barbaro uses the phrase ‘this Republic of Letters’ or ‘huic litteraria Reipublicae’ in a letter describing the discovery of ancient manuscripts in monastic libraries.2  In this period, so-called members of the early Republic of Letters were erudite male scholars writing to one another in Latin to communicate ideas, influence public opinion, and signal their identity as intellectuals. This notion of a scholarly community in communication, created by and nourished by the exchange of letters, could not truly flourish in scale and scope until the significant improvements to the postal system in the late sixteenth and early seventeenth century in Europe (Edelstein et al. 412).3  In 1684, Pierre Bayle founded a book review entitled Nouvelles de la République des lettres. While the use of this term was certainly not new, as Laurence Brockliss puts it, ‘Thereafter the curious came to see themselves as equal and independent members of a fictitious but powerfully imagined polity which cut across territorial, confessional, social, and occupational boundaries.’4  The ‘heyday’ of the Republic of Letters, understood as the period roughly from 1660-1789, is the concern of this entry (Daston 368).

This increase in movement and communication can be discerned in particular in the ‘numerical explosion of letters,’ where correspondences which used to number in the dozens or hundreds grow to thousands of letters exchanged (Edelstein et al. 412). Correspondence was the defining feature of the Republic of Letters and the primary practice that enabled its existence by uniting the gens de lettres across all of Europe, as well as enabling the dissemination of ideas, new literary and philosophical manuscripts, and political news and pamphlets.5  As Edelstein et al. put it, ‘If books and journals were the culminating products of the Republic of Letters, conversation was its lifeblood— and those conversations took place as much in lively social gatherings […] as they did in a form at times tangibly preserved for us: letters’ (414).’ If we consider some of the most active nodes in the Republic of Letters, the volume of letters exchanged, the size of the correspondence networks, and their geographic dispersion can give a sense of the scope of this virtual polity. Leibniz’s surviving correspondence numbers 15,000 letters (413). Similarly, a corpus of 21,000 letters constitutes Voltaire’s correspondence, of which 15,000 were written by Voltaire – to 1800 correspondents over the course of over seventy years.6 Correspondents who made up the Republic of Letters represented a range of social demographics characteristic of literate early modern society – not only philosophes and scientists, writers and playwrights, but also aristocrats, government officials, military officers, publishers, artisans, and merchants.7

Whether an acclaimed author like Voltaire or a layperson, denoting one’s membership in the Republic of Letters through correspondence, was in part what the Enlightenment was all about, ‘these different networks were central to their participants’ identity. One could not take part in the Enlightenment on one’s own’ (Edmondson and Edelstein 2). Correspondence in the Enlightenment solidified the links between mondanité or worldliness, amateurism, and erudition, to paraphrase Pierre-Yves Beaurepaire.8  Indeed, correspondence, travel, and institutions of sociability were inextricably linked in this time. The Republic of Letters depended on more than correspondence alone for its constitution. The epistolary backbone of the Republic of Letters was enriched by networks grounded in institutions, both formal and informal institutions of sociability. Its existence depended on a combination of features that all proliferated in the seventeenth and eighteenth centuries: travel, print culture, as well as academic institutions like the academies and institutions of sociability like the salons and coffeehouses. This contributed to the transition from a ‘humanist model of Latin men of letters to a more socially diffuse model of learned and vernacular communities of men and women writing, traveling, reading, and publishing’ (Edelstein et al. 413). Increased travel enabled the epistolary networks to expand and be maintained thanks to social institutions where individuals could meet face-to-face such as the salons, coffeehouses, and masonic lodges.

The physical displacement of people due to increased travel in the eighteenth century intensified the need to use correspondence as a means to maintain old and new ties, as well as the need for places where locals and foreigners could meet – milieus where worldly and intellectual exchange could take place.9 After all, the soaring to prominence of the Republic of Letters also depended on the newfound social status of intellectuals in the Enlightenment, as Lorraine Daston notes – citing d’Alembert’s observation that ‘men of letters had been plucked from their solitary studies and thrust into the “whirlwind” of fine and fashionable society’ (Daston 370). What’s more, travel and letter writing combined contributed to the construction of a shared conscience and to the circulation of ideas that was essential for intellectual life during the Enlightenment (223). This international network of communication not only fostered scholarly collaboration, for instance in the sciences, but it also contributed to creating the values of universalism (369).

Scholars have long debated how different the erudite humanist Respublica litteraria was compared to the Republic of Letters of the seventeeth and eighteenth- centuries, and they have also challenged the notion of a single community, pointing rather to several smaller republics of letters disseminated across Europe.11  But the transatlantic and pluri-national dimensions of the Republic of Letters was undeniable, as the emerging data indicate. The study of the Republic of Letters has benefitted substantially from the twenty-first-century endeavor to digitize its correspondence, and the technology of our time has also given scholars new tools with which to analyze it. The physical displacement of important nodes through travel, or even exile, were essential to this dimension of the Republic of Letters – think of Ben Franklin’s travels across the Atlantic, Francesco Algarotti’s travels throughout Europe, Voltaire’s time in England, or Hobbes, Descartes, Locke, and the French Huguenots in exile (Edelstein et al. 407; Daston 372). Think also of the monarchs like Catherine the Great or Frederick the Great who sought to indicate their own participation in the Enlightenment without travel per se, but through corresponding with the most eminent nodes in the network like Voltaire and d’Alembert.12

Although not the participants in the Republic of Letters who got the public or institutional recognition they were due, women were nonetheless active members of this network, albeit in smaller numbers. Women were central nodes for the in-person practices of sociability that were critical for the solidification of ties, for introductions, and for expanding networks of correspondence through travel, meeting, and in-person interaction. Scholars like Dena Goodman and Susan Dalton have been pivotal in unearthing the role that women played in this more modern Republic of Letters that was more socially expansive than the erudite and Latin Respublic Leterraria of Erasmus’ time.13  If we analyze the correspondence data available today, it is nonetheless clear that there were more men numerically corresponding in the Republic of Letters than women. However, the women who were a part of this network via correspondence were in no way random or incidental. The select group of female members of the Republic of Letters were central nodes, active in their correspondence and participation on the ground, with an ‘integral, consistent place within hubs of power in the French Enlightenment’ (Comsa et al. 526). Women fostered connections, facilitated introductions, and hosted salons where members of the Republic of Letters would meet in person, network, and debate new works. Their social prowess was an essential ingredient to the social dimension of the Republic of Letters (Goodman 101). Women also played important roles in networking for elections to the academy.14  And, women wrote extensive correspondence within this transnational network of Europe’s intellectuals. Being connected with these women was in fact essential for support in meeting the right people to gain access to patronage and sponsorship from the elites of society, and help in avoiding censorship.15

The Republic of Letters in its heyday from the late seventeeth century to the end of the eighteenth century remains to this day an ideal of global intellectual exchange. While the Republic of Letters was made up of many networks to be sure, and although it cannot be reduced to one single community, its ethos of the scholarly exchange of ideas across national borders characterizes all of the networks which composed it. In early modern times when nations and sovereigns maintained restrictive standards of censorship, the Republic of Letters allowed for the free exchange of ideas across national borders, in a community comprised of different religions, classes, and genders. Members of different religious affiliations and from different nations, members born to the aristocracy and members from more modest means, might ‘meet’ from afar through correspondence, or meet by chance in person at a salon or coffeehouse before continuing the communication through correspondence, exchanging political news from their respective countries, and engaging in the scholarly exchange of ideas. The Republic of Letters provides a model of a transnational and transatlantic community, dispersed across different societies and united only thanks to the modern innovations of increased travel and correspondence which enabled the virtual existence of this abstract early modern community.