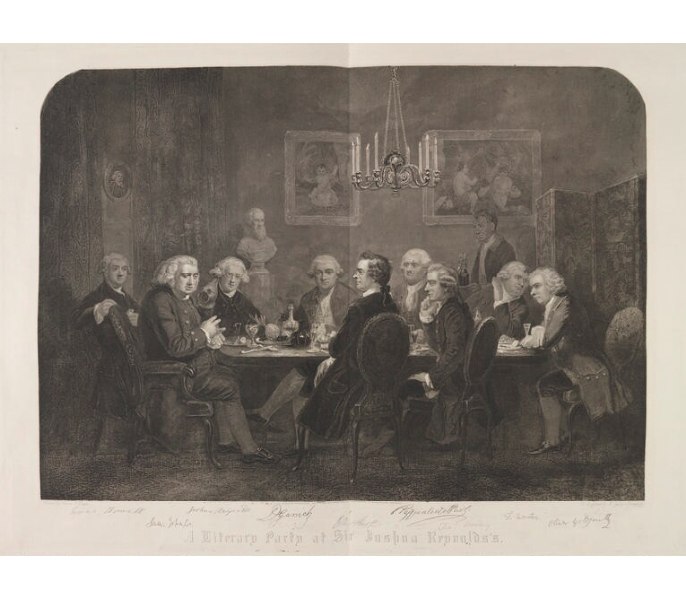 Johnson was one of the foremost and most controversial literary men of his age, and a leading figure of intellectual and conversational life in London. He loved the activities of intelligent society, and was instrumental in forming clubs for the opportunities to engage in them. He was aware of his intellectual superiority and had a tendency to seek to be centre-stage and applauded. He also aroused intense dislike, which he relished. His was a very male environment, but he enjoyed too the company of intelligent women and had several long-standing and loyal female friends.

Unkempt, ungainly, uncouth, with appallingly gluttonous table manners, aggressively loud, rude and argumentative, a conversational bully, perpetually racked by bodily tics and compulsions, blind in one eye, hard of hearing, and his face bearing the marks of his childhood scrofula, Johnson was an extraordinarily unlikely candidate for the role of one of the most sociable men of the eighteenth century. Indeed, during his peak period, from the late 1740s through until his death in 1784, Johnson’s name was virtually synonymous with sociability within the intellectual and cultural circles of London. Part of the reason for this was the celebrity he gradually gained by a lifetime of work as a professional writer, with publications, like his Rambler essays between 1750 and 1752, his edition of the works of Shakespeare in 1765, and above all his Dictionary of the English Language, first published in 1755, bringing him fame and, eventually, a state pension. This last also earned him the soubriquet ‘Dictionary Johnson’.

Literary pre-eminence brought with it a breadth of acquaintance and recognition, albeit with a considerable degree of controversy: his publications were very capable of ruffling feathers and arousing intense opposition, especially because Johnson did not hold back from advancing his own strongly-held political, religious and cultural views. But widespread acquaintance and being sought out as a famous man are not the same as sociability. Johnson accepted the consequences of literary celebrity – and of notoriety – but he actively engaged in sociability, valuing it, even relying on it, not least when one takes into account his lifetime of chronic depression, into which he was capable of falling at any time. James Boswell, in the Life of Samuel Johnson, LL.D. (first published in 1791, seven years after Johnson’s death), reports two particular remarks regarding these twin features of his temperament: ‘When a man is tired of London he is tired of life; for there is in London all that life can afford’ (20th September, 1777)1 , giving expression to the arena for sociable activity that Johnson had made his own for over thirty years; and, speaking of his fear of death, ‘that the whole of life is but keeping away the thoughts of it’ (19th October, 1769) (Boswell 416), indicative of the vital necessity for social activity of all kinds to help to preserve Johnson’s sanity – a fact of which he was very aware.

What made Johnson into the very epitome of London sociability, though, was not his desperate need for company, though that was undoubtedly part of it. It was an absolute relish for the activities and qualities sociability brought: the purely physical ones, including food, drink (in the years, at least, before he gave up alcohol), and the places where these things were to be had in abundance; and above all the intellectual and argumentative fulfilments of conversation, especially with men (and they were all men) who were approaching something like equality with him in terms of mental capacity and the desire to share views and to argue about them. Conversation among a like-minded circle gave Johnson a free space in which to excel: the ungainliness, the physical oddities, the greed, even the aggressive rudeness, were forgotten when he conversed, partly because of his intellectual brilliance, and partly because of his skill in a certain kind of conversation. Few could equal the mental agility he was capable of showing, albeit that he held strong views on a wide range of subjects, few could be as pointedly and appositely witty, and few were capable of withstanding the onslaughts of Johnson’s determination, in Boswell’s words, to ‘talk for victory’ (Boswell 528). In a telling aside, reporting a conversation that took place on 5th April, 1776, on the subject of gaming, Boswell first reports Johnson’s characteristic opening gambit: ‘He would begin thus: ‘Why, Sir, as to the good or evil of card-playing‘ – ‘and then David Garrick’s parenthetical comment: ‘Now, (said Garrick,) he is thinking which side he shall take.‘‘ ‘In fact, Boswell goes on,

The truth [...] is, that he loved to display his ingenuity in argument; and therefore would sometimes in conversation maintain opinions which he was sensible were wrong, but in supporting which, his reasoning and wit would be most conspicuous. [...] He appeared to have a pleasure in contradiction, especially when any opinion whatever was delivered with an air of confidence; so that there was hardly any topick, if not one of the great truths of Religion and Morality, that he might not have been incited to argue, either for or against it.‘ (Boswell 734)

Sociability, then, for Johnson was not simply a matter of being in company, but of being centre stage in that company, relishing the performance as much as the genuine exchange of ideas.‘

In a period known for its ‘clubbability’ (and the word itself is Johnsonian), Johnson stood out as a clubbable man, and indeed as a great founder of clubs. The best known is The Literary Club, of which he was co-founder with Joshua Reynolds in 1764. It included among its members David Garrick, Edmund Burke, Joseph Banks, Oliver Goldsmith, Edward Gibbon and James Boswell.  It met weekly, first of all at the Turk’s Head Inn in Gerard Street in Soho, and later in St James’s Street. The evening’s business was to dine and to talk. Boswell, even though he was present only for the few months each year of his annual visit to London, records in his journal, and then in the Life, extensive accounts of conversations at The Club, mainly to show up the sociable genius of Johnson himself. But Johnson was also instrumental in the founding of other clubs, the first being the Ivy Lane Club in 1749, which included the authors John Hawkesworth and Sir John Hawkins among its members, and the last, in 1783, the Essex-Head Club.

Clubs, of course, were a male preserve and Johnson’s sociability, insofar as it involved intellectual combativeness and the freedom to range and perform over wide areas of discussion, certainly flourished in what then passed as largely male territory. But he also enjoyed the society of women, both singly and in a family situation. Such company included friends like Dr and Mrs Taylor in Ashbourne, where Johnson had almost the freedom of a club situation in terms of intellectual variety and discursive give and take, and, more complicatedly, the Thrales, Henry and Hester, in Streatham. The Thrales provided him for many years with a home from home and every indulgence, and while Henry was a successful brewer rather than any kind of intellectual, Hester held a unique place in Johnson’s emotional and psychological life. His relationship with her, still not fully understood – not least because it was one that was unshared by Boswell, who subsequently saw her as a great rival – seems to have served not only to add a personal side to his sense of being in company, and of how one behaved there, but also to satisfy his deep need for intelligent and attractive female companionship. Her remarriage, after Henry’s death and a few months before Johnson’s own in 1784, was devastating to Johnson, both darkening the last days of his life and giving some insight into how vital the female side was in his capacity to be with other people in a situation of sociability.

Nunnery, David, Sociability, Information, and the ‘Inlets to Happiness‘ in Samuel Johnson’s Lives of the Poets (Madison: University of Wisconsin Press, 2009).