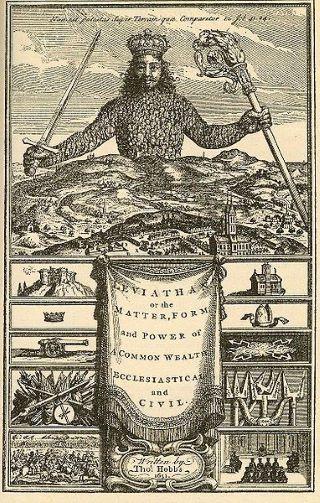 Thomas Hobbes’ rejection of the social nature of man is the foundation of his philosophy on the origin of State, and provides a rationale for his theory of absolute sovereignty. The refutation of natural sociability had political and anthropological consequences. It gave precedence to negative sentiments—fear and suspicion—and ranked morality and politeness behind the virtue of obedience.

The refutation of natural sociability

The majority of political treaties, from the age of Cicero and Aristotle to the mid-seventeenth century, begin with the premiss that what distinguishes man from the animals is his capacity for language and friendship. The theory that man was a Zôon politikon (a political animal, whose natural and political sociality were inextricably linked within the polis) gradually evolved into the principle of natural sociability, or the relatively advanced capacity to live in society, with reason and its manifestation, language, substituting for brute force.

Hobbes departed radically from this philosophical tradition in his interpretation of the civil wars that racked England, giving his own analysis of human nature, and established his theory of sovereignty, that of a social covenant guaranteed by the sword.

‘The greatest part of those men who have written ought concerning Commonwealths, either suppose, or require us, or beg of us to believe, That Man is a Creature born fit for Society: The Greeks call him Zoon politikon, and on this foundation they so build up the Doctrine of Civill Society, as if for the preservation of Peace, and the Government of Mankind there were nothing else necessary, than that Men should agree to make certaine Covenants and Conditions together, which themselves should then call Lawes. Which Axiom, though received by most, is yet certainly False, and an Errour proceeding from our too slight contemplation of Humane Nature.‘ (De Cive, I, 2, 90)

The English translation of Aristotle’s Politics was published in 1598. In The Elements of Law Natural and Politic, Hobbes would confront its dominant presupposition, that ‘man is by nature a social and political animal.’ For Hobbes, the human experience, at its core, was neither that of goodwill towards others nor of solitude, but one of violent sociality: men were in a constant state of conflict and competition, in confrontation even unto death. Men were natural ‘competitors’ and viewed each of their fellows as adversaries. The covenants which made citizens of men were in no way the extension of natural inclinations, positive social instinct, or the desire for community. This is evidenced by the rivalry that existed between men, whose foremost sentiment was not cohesion, but the comparative passions of honour and glory, condensed into a desire to dominate. This was the universal inclination of humanity. Nor were social contracts determined through the simple use of reason for the sake of peace, since, defined as ratio (calculation), and not logos (cf. Leviathan, ch. 5: ‘Of reason and science’), reason also inclines us towards hubris and dominance. In situations of irrationality, it is reason’s substitute, fear, that triggers the series of reciprocal compromises necessary for peace. For Hobbes, language was not part of the humanist utopia of a sociability based on civil conversation, but a superlative, sophisticated weapon, the manifestation of natural discord.1 For the social pact to be validated, the exchange of words must therefore be presided over by a disinterested third party. Distrust of individual discourse always prevailed, for trust required collective reasoning. Language therefore mutated from the capacity to signify to others what was good and just, from a manifestation of sociability, into a—temporary—obstacle to civil institution buried under the scepticism of fundamental and irremediable disagreements on what was good and just.

An inclination towards connection, in the incidental forms of need and assembly, in a creature that was not ‘solitary’, was not the same as the proclivity for political relationships. As Hobbes stated in chapter 1, paragraph 2 of De cive: Man was not a creature ‘born fit for society.’ Civil society (i.e., numerous, peaceful, and sustainable) can only ever be artificial, ‘political, and instituted.’ (DeCi, VIII, 1, 167).

Hobbes’ reversal became famous for the thirteenth chapter of Leviathan, which stated that, far from having to start from a point of compromise, as gregarious animals did, politics must be refounded on the bellum omnium contra omnes: ‘It may seem strange to some man, that has not well weighed these things; that nature should thus dissociate, and render men apt to invade, and destroy one another.’ (Lev, Ch. 13, §10, 84).

Here, Hobbes thoroughly upsets the theory of man’s aptitude for political society. The social nature of man yields to ‘egoism’ and an inclination towards distrust and fear. Hobbes does agree that passion was the foundation of political bodies, but only by replacing philia with fear, the traditional tool of despotic governments. If language finally makes the social contract possible, it is because ratio is awakened by passions—mainly, the fear of violent death. (Lev, Ch. 13, §14, 86)

Thus, the anthropological observation from which the doctrine of absolute sovereignty stems is made clear: ‘We must therefore resolve, that the Originall of all great, and lasting Societies, consisted not in the mutuall good will men had towards each other, but in the mutuall fear they had of each other, (DeCi, I, 2, 93-94).

Here, the purpose of political association is redefined: communal ‘well-being,’ life lived in friendship and equality, is superseded by a civil society where the ultimate goal is ‘commodious,’ self-interested living: ‘All Society therefore is either for Gain, or for Glory; (i.e.) not so much for love of our Fellowes, as for love of our Selves’.

But this does not mean that any thought of sociability as a virtue is now excluded. The only way to extricate society from the competition for resources is to institute a sovereign by the sword. Society must have peace in order to endure. So, from a political viewpoint, sociability reverts to the lesser form of a useful commodity associated with civility. No longer the foundation of social life, sociability simply becomes a by-product of its institution. At the beginning of De Cive, Hobbes states, ‘Manifest therefore it is, that all men, because they are born in Infancy, are born unapt for Society. Many also (perhaps most men) either through defect of minde, or want of education remain unfit during the whole course of their lives; yet have Infants, as well as those of riper years, an humane nature; wherefore Man is made fit for Society not by Nature, but by Education.’ (see aforementioned annotation).

Social behaviour is therefore constructed; it is not a question of transforming human nature, but of channelling man’s passions. All virtues and natural laws are derived from the principle of self-preservation, not from goodwill or noble motives.2

Indeed, natural law refers only to self-preservation: ‘The Right of nature ... is the liberty each man hath, to use his own power, as he will himself, for the preservation of his own nature; that is to say, of his own life.’ (Lev., Ch. 14, §1, 86) Concrete, defined duties, are not the natural consequence of man’s nature but of the social contract, the end goal of which is the ‘good life.’ Man’s imperative is to seek preservation (of the self, not the whole of humanity), which leads to the injunction to seek peace, to restrict one’s personal freedom, to recognise equality, and to give up one’s rights.

Thenceforth, the natural obligation of agreement, fairness, sociability, gratitude, and humanity, the laws of nature, or the ‘qualities that dispose men to peace, and obedience,’3  are deduced by reasoned calculation and re-established as foundations of society; whosoever violates this contract cannot be admitted into any society of men.

Only then does the fundamental law of society, ‘to seek peace, and follow it’ (Lev, ch. 15, 87), permit the defining of ‘sociable’ and ‘unsociable.’ Hobbes’ notion of sociability was conceived against a background of weariness over the war, and the fear of a return to natural conflict, and relates above all to the effect of civil laws.

The political guarantee of trust can only be enforced by covenants of the sword, and through education that favours sociable qualities over pride, which fosters a state of war.

A fifth law of nature, is COMPLAISANCE; that is to say, that every man strive to accommodate himself to the rest. For the understanding whereof, we may consider, that there is in men’s aptness to society, a diversity of nature, rising from their diversity of affections; not unlike to what we see in stones brought together for building of an edifice.

The metaphor of polishing rough stones refers to a conventional notion: good morals are those that have been ‘polished’ against other, exemplary morals, guaranteed by the ‘police’ of the State. The resulting civility should not be understood as urbanity, politeness, or mere flattery. Like other moralists, Hobbes appealed to empirical observation, finding in civil relationships the potential for the domination of warlike sociability:

How by what advice Men doe meet, will be best known by observing those things which they doe when they are met: For if they meet for Traffique, it's plaine every man regards not his Fellow, but his Businesse; if to discharge some Office, a certain Market−friendship is begotten, which hath more of Jealousie in it than True love, and whence Factions sometimes may arise, but Good will never (DeCi, I, 2, annotation, 91).4

At the beginning of chapter 11 of Leviathan, he rejects the ideal of the honest man with one ironic stroke of his pen. What affects external behaviour is mockingly relegated to the private sphere: ‘By manners, I mean not here, decency of behaviour; as how one should salute another, or how a man should wash his mouth, or pick his teeth before company, and such other points of the small morals; but those qualities of mankind, that concern their living together in peace, and unity.’ (Lev, ch. 11, 65).

The science of morals does not refer to ‘good manners’ or to virtue as a moderator of passions, but to keeping one’s commitments and obeying laws. In short, it means using one’s reason befittingly and precisely calculating the consequences of one’s acts.

In contrast to Aristotelianism and Neo-Stoicism, and later to theorists of moral sentiment and civic humanism, Hobbes saw goodwill as a possible—though in no way guaranteed—consequence of the State, not as its precondition. Self-interest, not public utility, and the love of self, not the love of others, are at the origin of the social bond maintained by the overarching sovereign that dominates the frontispiece of Leviathan. The transformation of the savage man into a sociable man is due to the sword, which curbs anti-social behaviour, and to the application of natural laws within civil society. After challenging natural sociability, Hobbes turned his attention to the duties of citizens and to sociability through institution. Man needed the experience of past dangers and misfortunes (DeCi, Pref., 73 and I, 2, annotation 1) to achieve reason. Only discipline can make citizens or drive home the connection between submission and protection. In the absence of mutual affection, rational calculation and fear may suffice. Love, friendship, and sympathy can come of private relationships, while the focus of political doctrine is the proper civic disposition, which consists in knowing how to obey.

In opposition to the theorists of political concord (Aristotle, Cicero), Hobbes held up the objective of civil peace, which he defined as a state of non-war and agreement resulting from psychological egoism, because all human conduct is self-interested.5 Hobbes’ anthropology of individualism and of human materialism dealt a fatal blow to the doctrine of natural sociability. The sword, symbol of absolute sovereignty, replaces sociability as the key to the unification and pacification of society. When addressing philia, Hobbes highlights the impossibility of definitively solving the problem of unsociable sociability in man. We know the fate of these notions under the scrutiny of the ‘selfish philosophers’ of the eighteenth century (Mandeville, La Rochefoucauld) as well as of Kant (Idea for a Universal History with a Cosmopolitan Aim): antagonistic inclinations are a necessary evil that needs to be politically channelled by civil constraints, and overwhelmed by moral law.6