Voltaire (and his social networks) 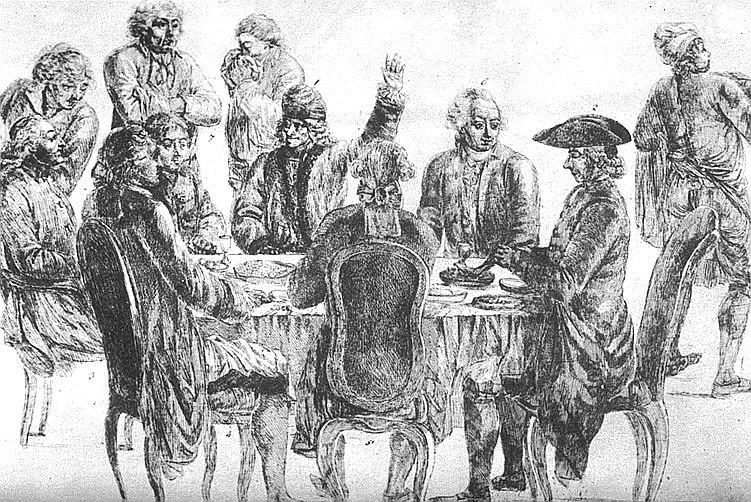 Voltaire often portrayed himself as a solitary man who preferred to live far from the hustle and bustle of worldly life. In reality, he was a man for whom sociability was a fundamental virtue. It could manifest as anything from the most ephemeral worldliness to lifelong, intimate friendships. Voltaire was one who courted high society and gave sumptuous receptions, but the ties with those he called friend would remain sacred throughout his life.

Voltaire styled himself the ‘hermit of the Alps’1  in much of the correspondence he produced from his residence in Ferney. Yet he was by no means a hermit. Throughout his life, he lived surrounded by people and accorded much importance to sociability. His passion for sociability took several forms and would contribute enormously towards shaping his personality. To understand the latter, we must explore the different social networks that structured Voltaire’s existence.

At the age of ten, François-Marie Arouet, the future Voltaire, was enrolled at Collège Louis-le-Grand. For Arouet’s father, the choice had been a strategic one: not only would his son receive a first-rate Jesuit education, he would also frequent the children of the most powerful people in the kingdom. It would prove a decisive experience for Voltaire, conditioning his regard for sociability, and more particularly, for friendship and worldliness. Indeed, Voltaire befriended a number of high-born figures at Louis-le-Grand, such as the brothers Charles-Augustin de Ferriol d’Argental and Antoine de Ferriol de Pont-de-Veyle, Claude Philippe Fyot de la Marche, and many others. Voltaire’s closest and most long-lasting friendship would be with d’Argental, whom he called his ‘angel,’ and with whom he regularly corresponded; yet their friendship would remain founded on the awareness of their profound differences in social status. François-Marie Arouet may have grown to be the best of friends with his noble fellows, he was still no more than a commoner. The distinction was palpable, and it would follow him throughout his years at the collège and into adulthood.

Even so, Voltaire’s friendships and Jesuit education are likely what pushed him towards a worldly social life. By 1713, he was an increasingly frequent figure at the court of the duchesse du Maine. The young writer, quick of wit, the perfect courtier, had contrived the duchesse’s protection. His worldliness would also serve him well in his writing: he made such a name for himself that the Comédie-Française took interest in his work, Œdipe, and the public were keen to see it. Alongside Voltaire’s brilliant and prodigious worldliness, which only added to his mythical reputation, he formed deep and genuine friendships: with Nicolas-Claude Thieriot, whom he met when his father forced him to clerk in the office of a prosecutor; Adrienne Lecouvreur, whom he befriended later in life; and of course, with his old college friends. They were Voltaire’s anchors in all the ephemerality of his tempestuous worldly life.

Yet high society would repeatedly remind Voltaire that for all his talent, he was still just a commoner. Enter the chevalier de Rohan: feeling the sting of Voltaire’s wit after a much-publicised verbal confrontation, Rohan dispatched his henchmen to give Voltaire a beating. Voltaire sought redress for this humiliation, but the nobles he frequented rebuffed him—for the bonds of nobility and high birth were stronger than worldly connections. Under strain, the sociable fiction of equality2 crumbled into dust. What followed is well known. Voltaire found himself in exile in London, and became enchanted with England. Upon his return to France, he met another soul who would become dear to him: Émilie Du Châtelet.

The pair settled in Cirey. Madame Denis would claim the estate was situated in a cultural desert, the couple living ‘in frightfully inhumane solitude.3 Yet they were not as isolated as Denis might have led us to believe. Though the two companionable lovers lived far removed from the world and from worldly society, mainly dedicated to their work and their studies, they recreated a form of sociability—largely thanks to Madame de Champbonin, who spent her days at the château in Cirey, but also with visiting far-flung acquaintances such as Madame de Graffigny, Léopold Desmarets, Pierre-Louis Moreau de Maupertuis, and the baron Keyserling, emissary to Frederick II of Prussia. Guests were always lavishly entertained.4 Even when in an isolated château in Lorraine, Voltaire conserved his appetite for sociability. His voluminous correspondence also speaks to his need for friendly and social relationships.

Voltaire’s sociable inclinations were given fresh life when he moved to Switzerland and thence to Ferney: there, Voltaire was at the height of his glory. Immediately upon arriving in Geneva, he exploited his relationships with some of the influential elite, such as the Tronchins, so he could settle in the house he would later call ‘Les Délices,’ though as a Catholic, it was a privilege he would normally be denied. He was similarly able to leverage his connections to skilfully circumvent the ban on theatre performances in Geneva5  And from his residence in Lausanne, he used theatre to gain access to the circles of the local elites.6  Voltaire was well known and admired, drawing crowds clamouring to know the great author; his network of ‘fanatics,’7 to quote Charles Collé, were the mark of another form of sociability built around celebrity.8

To speak of Voltaire and his rapport with sociability is to accept paradox: Candide leads us to believe that in order to be happy in life, one must cultivate one’s garden far from worldly troubles; Voltaire’s life teaches us that even in his ‘garden’ in Ferney, sociability was an irresistible impulse. He lived surrounded by his beloved chosen family: Madame Denis; Marie-Françoise Corneille, his adopted daughter; and Reine-Philiberte, the future marquise de Villette, to whom he affectionately referred as ‘Belle et Bonne’. He regularly received friends, gave private theatre performances in his home for his numerous admirers, and continued to furnish his long-time friends with an abundance of correspondence.

We might borrow from Mark Granovetter’s theory on social networks, admittedly a little anachronistically, to refer to Voltaire’s relationships. Of the ‘weak’ and ‘strong’ interpersonal bonds, Voltaire formed the latter with his friends, whom he genuinely loved, and would pardon any indiscretion, just as he had Thieriot, who for his own profit had distributed one of Voltaire’s manuscripts. His friends in Paris would serve as his eyes and ears whilst he lived afar, foremost among them the d’Argentals who would send reports on performances at the Comédie-Française. It was also they who helped publish his works, despite the scandal they caused. The ties of intermediate strength were those forged from his worldly experiences: the protectors in the Parisian courts or provincial estates where Voltaire took refuge while in exile, and the people with whom he formed attachments and staged plays in Switzerland. Finally, the weak links designate the relationships Voltaire developed with several of the admirers who flocked from all over Europe to Ferney in the hopes of seeing the great man; these he would grace with the occasional letter or reception. It is they who contributed most to shaping the myth of the ‘patriarch’ of Europe.

And so, though Voltaire described himself as the ‘recluse’ or ‘marmot’ of the Alps, he was, on the contrary, a social animal, a self-made man who had come to prominence in part due to his people skills and his talent for sociability.