"the Conversation which is engrossed for Hours upon playing alone, Basto, Ponto, Manille, Matts, and Fish,  can afford no Improvement either to the Auditor or the Speaker."

To the Printer of the Public Advertiser.

There is nothing more fascinating than the Plearure of Gaming, nothing more pernicious to the Mind, the Constitution and the Purse. It is the Grave of every noble Principle, and suspends the Use of those Faculties, which enobles us in the Scale of Creation. If we were to ask wherher we were endowed with an immortal Soul, to spend Hours together in beholding a few Spots upon a Piece of Pasteboard, the Question would be esteemed absurd; but the Practice has lost taaicc has [ ] Ridiculousness. The Faculties of Spe[ech] [page 2] were given us to communicate our Ideas, and our Discoveries in Knowledge. But this Faculty is by the Gamester restricted only to the Purpose of communicating how a Trick was lost, or how it might have been won: The Anxiety which is attendant upon the Fate of a Card, is not Iess than that which is occasioned by the Loss of a Crown; and if Lucre alone possesses the Boson, Thorns grow there without Restraint.

The vivid Glow which plays upon the Face of Beauty, and calls a divine Lustre on the humane Face, is dimmed by that Attention which is necessary to preserve the Charatter of a good Player; and that Sprightliness which makes its Way irresistibly into the Heart, is lost amidst the Ideas which are raifed by a Game of Piquet or Ombre. The Harmony of the Female Voice is too often made dissonant by the Peevishnefs occasioned by a Loss, and the late Hours occasioned by playing a double Pool, is more destructive of the delicate Charms of Beauty, than a Fever or a Confumption.

The Love of Gaming is productive of every Fault that can threaten our domestic Treasures and Happiness, and is not less perni- cious to the Peace of our Minds, than to the Safety of our Virtue. It is not strange then that the Noble and the Tradesman should be so fond of this pernicious Amusement. Is it not more strange that nothing should be heard of in the Circles of the Polite but Cards ? Is it not horrible that Gaming should be esteemed one of the Branches of Education, and that a young Lady should be an Adept in the Maxims of Hoyle, who is an entire Stranger to the first Principles of Religion ?

People used formerly to meet together for the Sake of Conversation ; but ever since the Card Table has been in Fashion, all the Pleasures of Speech have been suppressed, and a Visit is nothing more than an Endeavour to win the Money of your Acquaintance. 'Tis true, an unsuccessful Game not only sours the Temper, but likewise incites the Person to venture the Fate of a second: A Defeat at Gaming animates instead of discouraging; and a true Gamester is refolved to lose all, if he has only lost a Part.

I would not take upon me to determine how much the learned World have been hurt since the Spirit of Gaming has been increasing; yet that it has been a Loser, every one mull confess. When our Visits were intended either to improve our Friends or ourselves, several noble Hints were thrown out, which might be of Service to Mankind in general; but the Conversation which is engrossed for Hours upon playing alone, Basto, Ponto, Manille, Matts, and Fish,  can afford no Improvement either to the Auditor or the Speaker.

The Hours which our Mothers used to spend in Working, Point, and Embroidery, in visiting their Sick Neighbours, &c. are now devoted to Cards; and the Cares of a Family do not dissolve to the Mistress, but to a hired Servant, who is named a Houfiekeeper.

I will not draw out this Invective against Card-playing any longer, for fear of its proving too tedious; but shall conclude, though at the same Time indulge a pleasing Hope, that this Letter will meet with your Approbation, and find a Place in the Public Advertiser. 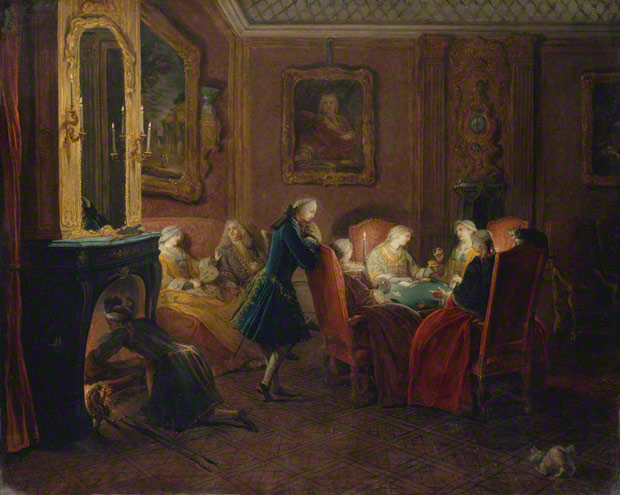