To pursue a Woman too closely, and fasten upon her with one's Eyes, is counted very unmannerly; the Reason is plain, it makes her uneasy, and, if she be not sufficiently fortified by Art and Dissimulation, often throws her into visible Disorders...

Erasmus Jones, Rules for walking the Streets and other Publick Places’ (1737)

If we walk in the Park, or any other Publick Place, with a Superior, we are always to observe to give him the upper Hand; and if three or more be in Company, we are to take care to place him in the Middle.

The like Rule is to be observ'd to a Lady, if she be walking with Gentlemen.

The Ladies are to pay the same Complement to Gentlemen, when they are the Majority of Three.

If whilst we are walking, we see any Person of our Acquaintance, or their Servants pass, we are not to Bawl and Hem after them, like a Butcher out of a Tavern Window; nor must we leave the Person we are walking with, to run to them.

When the Civility of the Hat is given to a Gentleman, with others walking in his Com pany, the reft (though Strangers to the Party) are to return it.

Two Companies meeting and passing each other, there cannot be a greater Rudeness, than for any one to look back with a Grin over the Shoulder, because it always indicates some Slander, and is often remember'd with Prejudice.

I have seen some People as they have pass'd open-handed enough; but then they dispensed their Charities with so unhandsome a Grace, that methought they did Ill in doing Good, and refus'd an Alms while they gave one; they seem'd to insult over a poor Creature's Misery, and seldom open'd their Purse, till they had vented their Gall. This is not to relieve the Indigent, but to throw Shame upon Want, and Confusion upon Necessity; 'tis to hang Weight to their Burthen, and to fret Poverty with Contempt: Besides, it loses the very Nature of Alms; for that is not received Gratis, that is purchas'd with Blushes, and at the Expence of Patience. A kind compassionate Look, oftentimes refreshes more than a Crown with a severe one. The very Manner of giving adds to the Gift.

There cannot be a greater Mark of Ignorance and Ill Manners, thian to gape at a Person worn down in a Consumption, afflicted with a Jaundice, or labouring under any other visible lnfirmity, as they pass along, and to stare at 'em, as at a Statuary's Shop at Hyde-Park-Corner; because, it oftentimes gives too great a shock to low Spirits, and has been atiended with very Ill Consequences to the unhappy Sufferers. It is likewise ungenerous to pursue any tatter'd undone Wretch, with a fleering ill-natur d Coutenance, though even his Misfortunes may have been brought about by evil Courses, because, as Mr. Addisson well observes, it's Punishment enough to be a Villain.

A smart Coat, fine Waistcoat, nicely powder'd Wig, and lac'd Linnen, may in some Degree justify a Man's taking upon him in the Street, where Respect depends wholly upon Appearance. But the Man of Mode must permit me to inform him, that these Ornaments are a prejudice to him in polite Company, if they are not supported by something else. People are caught at the first View by a genteel Dress; but they soon grow impatient to hear, whether the Man who wears it be a fine Gentleman, or a Coxcomb.

If a proud Fellow, of more Fortune than Merit, puts a contemptible Look, or an escaping Eye on an Acquaintance, because he is in lesser Circumitances than himself, the Blemishes of his Life, are but justly remember'd and repeated: A very proper Retort on a vain and mean-spirited Creature.

Two low Fellows meet in the Street, resembling the Arms of the Hand in Hand Fire Office, accosting one another, with a How fares your best Body? give me thy Bawdy Fist. Another that hath not seen his Friend for some time, Ye Son of a Whore, where have you been all this while? Where in the Name of Vengeance have you hid yourself? cries a Third. -- While another familiar Spark says to his Friend, Damn ye you Dog how dost do? give me thy honest Paw, come g'is it heartily. -- A coarse vulgar Creature comes up to a Porterly sort of a Man, So John, where are you tramping, how does Mary and the Child? I'm going to get a Bit of something at Market for Robin's Dinner.--Two Doctors Chariots are lying along side of each other, converting on the Progress of Diseases, and the Power of Medicine.-- A couple of Footmen with Napkin Caps beneath their Hats, are complaining of the Miseries of Servitude.---A Laundress from her two pair of Stairs Casement, calls out to a Fellow running along the Streets, with a colour'd Handkerchief about his Head, Joe, what you're going to see the Prisoners go by, I shall call for your Shirt by and by.-- Two Barber's Boys, with each of them a Wig-Box under his Arm, enquiring how long it is to the next Holidays.--By your leave, goes a Chairman, after he has beat a Person almoft to the Ground.---A Debtor is attempting to give the Go-by to his Creditor, who having detected him in the Fact, retires with him towards a Post, Well, when shall we settle this little Matter, &c. There are the Marks of English Familiarities, pure Sallies of Kindness and Demnonstrations of Friendihip.

To pursue a Woman too closely, and fasten upon her with one's Eyes, is counted very unmannerly; the Reason is plain, it makes her uneasy, and, if she be not sufficiently fortified by Art and Dissimulation, often throws her into visible Disorders; as the Eyes are the Windows of the Soul, so this staring Impudence flings a raw unexperienc'd Woman into panick Fears; as one easily perceives when you earnestly fix your Eyes at a Woman's Feet, because you instantly bring her to the same Level.

To gape into any Dining-Room, or Parlour, where Company is assembled, as one passes along, is a most impertinent Curiosity.

Persons of Figure, when they chuse to amble the Publick Streets, should always appear in a Dress suitable to their Dignit; not only for the sake of the Way, and to prevent Insults; but to preserve the Respect due to great Personages. The other Day a Lord, wrapt up in a Horseman's Great Coat, and with a hairless Perriwig, was accosted by a Carcass Butcher, from a Bulk in Fleet-Street, with a Request, to bear a Hand to help him up with, his Basket.

Two meeting in a narrow dirty Pathway, the Party that gives way is to receive the Civility of the Hat, or a Curtesy from a Woman.

It is Indiscreet and Vulgar, when two People meet in the Street, to discourse so high, as to be heard up to the Garret Windows, and to converse in such a vociferous manner, as to make the Passers-by loiter about to hear them.

Text from Erasmus Jones, The Man of Manners: or, Plebian Polish'd. Being Plain and Familiar Rules for a Modest and Genteel Behaviour. London : Printed for J. Roberts, near the Oxford-Arms in Warwicklane; and sold by E. Withers, at the Seven Stars, against the end of Chancery-lane in Fleet-street; and J. Jollisse, at the Bible in St. James's-street; and the rest of the booksellers of London and Westminister, 1737, p. 1-5. Full book in ECCO. 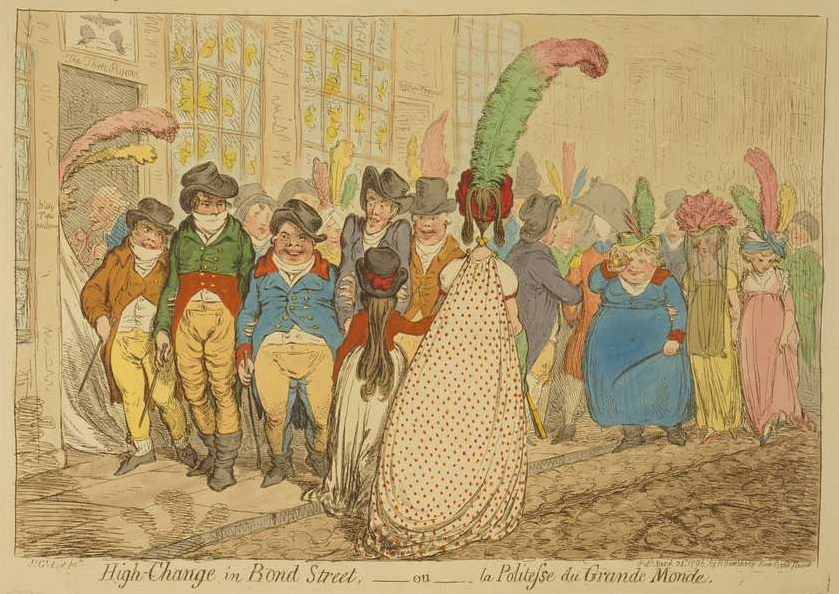