"Abandoned thus of all my natural friends, of whose returning favour I have now no hopes, and only you to pity me, and you restrained, as I may say, I have been forced to turn my desolate heart to such protection as I could find."

Your letter, my beloved Miss Howe, gives me great comfort. How sweetly do I experience the truth of the wise man's observation, That a faithful friend is the medicine of life!

Your messenger finds me just setting out for London: the chaise at the door. Already I have taken leave of the good widow, who has obliged me with the company of her eldest daughter, at Mr. Lovelace's request, while he rides by us. The young gentlewoman is to return in two or three days with the chaise, in its way to my Lord M.'s Hertfordshire seat.

I received my sister's dreadful letter on Sunday, when Mr. Lovelace was out. He saw, on his return, my extreme anguish and dejection; and he was told how much worse I had been: for I had fainted away more than once.

I think the contents of it have touched my head as well as my heart.

He would fain have seen it. But I would not permit that, because of the threatenings he would have found in it against himself. As it was, the effect it had upon me made him break out into execrations and menaces. I was so ill that he himself advised me to delay going to town on Monday, as I proposed to do.

He is extremely regardful and tender of me. All that you supposed would follow the violent letter, from him, has followed it. He has offered himself to my acceptance in so unreserved a manner, that I am concerned I have written so freely and diffidently of him. Pray, my dearest friend, keep to yourself every thing that may appear disreputable of him from me.

I must acquaint you that his kind behaviour, and my low-spiritedness, co-operating with your former advice, and my unhappy situation, made me that very Sunday evening receive unreservedly his declarations: and now indeed I am more in his power than ever.

He presses me every hour (indeed as needlessly, as unkindly) for fresh tokens of my esteem for him, and confidence in him. And as I have been brought to some verbal concessions, if he should prove unworthy, I am sure I shall have great reason to blame this violent letter: for I have no resolution at all. Abandoned thus of all my natural friends, of whose returning favour I have now no hopes, and only you to pity me, and you restrained, as I may say, I have been forced to turn my desolate heart to such protection as I could find.

All my comfort is, that your advice repeatedly given me to the same purpose, in your kind letter before me, warrants me. I now set out the more cheerfully to London on that account: for, before, a heavy weight hung upon my heart; and although I thought it best and safest to go, yet my spirits sunk, I know not why, at every motion I made towards a preparation for it.

I hope no mischief will happen on the road.—I hope these violent spirits will not meet.

Every one is waiting for me.—Pardon me, my best, my kindest friend, that I return your Norris. In these more promising prospects, I cannot have occasion for your favour. Besides, I have some hope that with my clothes they will send me the money I wrote for, although it is denied me in the letter. If they do not, and if I should have occasion, I can but signify my wants to so ready a friend. And I have promised to be obliged only to you. But I had rather methinks you should have it still to say, if challenged, that nothing of this nature has been either requested or done. I say this with a view entirely to my future hopes of recovering your mother's favour, which, next to that of my own father and mother, I am most solicitous to recover.

I must acquaint you wit one thing more, notwithstanding my hurry; and that is, that Mr. Lovelace offered either to attend me to Lord M.'s, or to send for his chaplain, yesterday. He pressed me to consent to this proposal most earnestly, and even seemed desirous rather to have the ceremony pass here than at London: for when there, I had told him, it was time enough to consider of so weighty and important a matter. Now, upon the receipt of your kind, your consolatory letter, methinks I could almost wish it had been in my power to comply with his earnest solicitations. But this dreadful letter has unhinged my whole frame. Then some little punctilio surely is necessary. No preparation made. No articles drawn. No license ready. Grief so extreme: no pleasure in prospect, nor so much as in wish—O my dear, who could think of entering into so solemn an engagement? Who, so unprepared, could seem to be so ready?

If I could flatter myself that my indifference to all the joys of this life proceeded from proper motives, not rather from the disappointments and mortifications my pride has met with, how much rather, I think, should I choose to be wedded to my shroud than to any man on earth!

Indeed I have at present no pleasure but in your friendship. Continue that to me, I beseech you. If my heart rises hereafter to a capacity of more, it must be built on that foundation.

My spirits sink again on setting out. Excuse this depth of vapourish dejection, which forbids me even hope, the cordial that keeps life from stagnating, and which never was denied me till within these eight-and-forty hours.

But 'tis time to relieve you.

Adieu, my best beloved and kindest friend! Pray for your

Samuel Richardson, Clarissa. Or, the history of a young lady: comprehending the most important concerns of private life. And particularly shewing, The Distresses that may attend the Misconduct Both of Parents and Children, In Relation to Marriage. Printed for S. Richardson: and sold by A. Millar, over-against Catharine-Street in the Strand: J. and Ja. Rivington, in St. Paul's Church-Yard: John Osborn, in Pater-Noster Row; and by J. Leake, at Bath, 1748, vol. 3, p. 265-268 (Letter LV, Miss Clarissa Harlowe to Miss Howe, 26 April). 1902 edition of the full book in HATHITRUST. 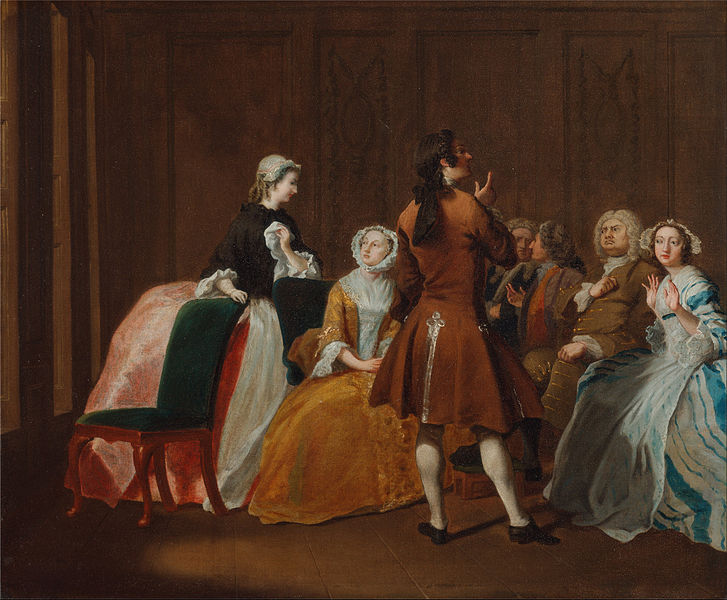