"When the musick ceases for the evening, the chill of the night hurries the company to the water-side, through a lane of watermen, each waiting for his passengers, who generally call by name the men who brought them thither. The throng on the edge of the water is so great, that it is with much difficulty the Ladies can be handed to their seats..."

The chief part of the company having seated themselves in the arbours, five hundred separate suppers are served in an instant: and as a proper judgement of this entertainment cannot be fully formed without a knowledge of the expence attending it, it may be necessary to inform you, that the prices of provisions are printed, and fixed up in several parts of the gardens, to prevent the guests from being imposed upon by the waiters; each of whom has a number painted upon a small tin plate, and fastned to his breast, on the out-side of his coat, and a certain number of tables committed to his charge, being obliged to pay at the bar for every thing as he has it. —The price of a bottle of French claret is 5s. of one cold chicken 2s.6d. quart of cyder 1s. quart of small-bear 4d. slice of bread 2d. of cheese 4d. and every thing else in proportion, which raises an elegant collation to a high rate. —But that is not much thought of here; the musick plays, the Ladies look pleased, and the Gentlemen forget the expence, by having their minds busied upon thoughts more delightful.

Glass candlesticks with wax lights are mostly used; and, with the addition of the china dishes, plates, &c. in which every thing is served up, greatly increase the beauty and elegance of the cover'd tables. —I must confess when this custom of supping before the publick first came in fashion, I was far from approving it: but powerful use has familiarized it; and we are now no more surprised to behold a young Lady dissect a pigeon, or swallow a plate of ham before three thousand people, than to see her take a pinch of snuff at church. Tarts, custards, cheese-cakes, &c. are supplyed the younger company in great perfection; and, with the power of a few glasses of wine, the men grow more complaisant and not less amorous, the Ladies lose some of the constraint under which their eyes before laboured, and a chearful freedom spreads itself through the place.

The night grows cold, and towards the close of the entertainment, some of the best pieces of musick are performed with the utmost skill and care, in order to leave the stronger impression upon the audience of the elegance of the entertainment. The more considerate part of the company think of getting upon the water on their return home before the crowd at the water-side is too great. When the musick ceases for the evening, the chill of the night hurries the company to the water-side, through a lane of watermen, each waiting for his passengers, who generally call by name the men who brought them thither. The throng on the edge of the water is so great, that it is with much difficulty the Ladies can be handed to their seats: the boats, by pressing all to land at a time, (the place for stepping in being scarce big enough for ten to lie conveniently, though frequently more than four hundred attend) keep one another in a continual coggling motion, and often endanger oversetting; though seldom any other mischief is done beside the breaking some watermens heads, and the bottoms of boats, poles, oars, &c. —In this hurry and confusion some miss of their boats, and others rush into such as are at hand without enquiry. On these occasions words often arise, and sometimes not without just cause: for you must acknowledge it highly provoking, between 10 and 11 o'clock, at such a distance from home, to see the boat one provided to return in, cram'd full of other people, who force the watermen to leave you, without a prospect of crossing the water all night, unless by chance, for most exorbitant hire, you get some boat to give you a cast to the other side, after which, many have a mile to trudge before a coach can be got to ease the fatigue of the journey

But to return to the stairs at Vaux-hall: Most of the boats being hired, it is very common to see a polite Gentleman begging room for a Lady, or for himself: and some young fellows with a glass extraordinary in their heads, take a pleasure in following any Lady they affect to admire, into whatever boat she enters, and, sometimes, maintain their ground sword in hand: tho' I must confess, how gallant soever such actions may appear to the fair-sex, they are too rude to be calmly approved of; especially by Gentlemen to whom these insults are offer'd, who are under a necessity either of disputing with a stranger at the hazard of every life in the boat, or of sitting to be pester'd with his impertinence to the end of their little voyage, and thereby do a real service where a toss overboard would be more critically just

Most of the boats have a covering over them; and the silence of the night is interrupted by nothing but the sound of a few French horns, and the tedious groaning of the oars. The Ladies now earnestly desire to reach home, and the Gentlemen find enough to do in diverting them from giving too much attention to the cold that now very sensibly seizes their tender shoulders: A song is of some use here; though it is frequently succeeded by a yawning chorus

The landing is attended with no danger or trouble, unless at Westminster, or Whitehall stairs, where there is sometimes a little hurry; at the others people go on shore with great deliberation, when the nights are dark, and gladly stretch their legs, which are commonly benumm'd and crippled by the shallowness of the boats used on this river

You see, Sir, our journey to Vaux-hall is a human enjoyment; having fatigue enough attending it to heighten the entertainment. I was going to recommend an imitation of it near Edinburgh: but, perhaps your evenings are too cold, and luxury within better bounds than with us; for tho' Vaux-hall certainly must please most men, yet I know not whether the money laid out upon it be of proportionable use to the publick.

I am, SIR,
Your very humble servant,
S. TOUPEE. 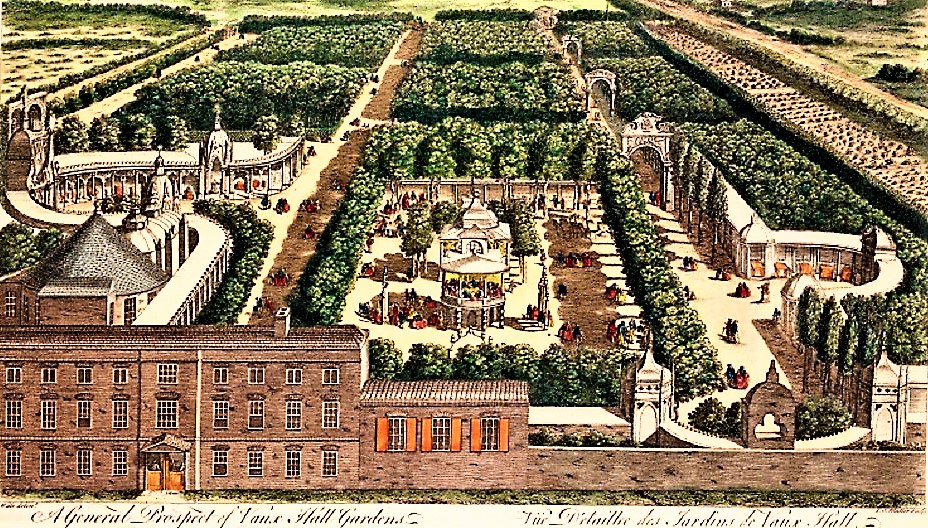