"We Lions are none of us Painters, else we could show a hundred Men killed by Lions, for one Lion killed by a Man. You Men are Writers, and can represent us Women as Unbecoming as you please in your Works, while we are unable to return the Injury." (Richard Steele)

Arietta is visited by all Persons of both Sexes, who may have any Pretence to Wit and Gallantry. She is in that time of Life which is neither affected with the Follies of Youth or Infirmities of Age; and her Conversation is so mixed with Gaiety and Prudence, that she is agreeable both to the Young and the Old. Her Behaviour is very frank, without being in the least blameable; and as she is out of the Tract of any amorous or ambitious Pursuits of her own, her Visitants entertain her with Accounts of themselves very freely, whether they concern their Passions or their Interests. I made her a Visit this Afternoon, having been formerly introduced to the Honour of her Acquaintance, by my friend Will. Honeycomb, who has prevailed upon her to admit me sometimes into her Assembly, as a civil, inoffensive Man. I found her accompanied with one Person only, a Common-Place Talker, who, upon my Entrance, rose, and after a very slight Civility sat down again; then turning to Arietta, pursued his Discourse, which I found was upon the old Topick, of Constancy in Love. He went on with great Facility in repeating what he talks every Day of his Life; and, with the Ornaments of insignificant Laughs and Gestures, enforced his Arguments by Quotations out of Plays and Songs, which allude to the Perjuries of the Fair, and the general Levity of Women. Methought he strove to shine more than ordinarily in his Talkative Way, that he might insult my Silence, and distinguish himself before a Woman of Arietta's Taste and Understanding. She had often an Inclination to interrupt him, but could find no Opportunity, 'till the Larum ceased of its self; which it did not 'till he had repeated and murdered the celebrated Story of the Ephesian Matro.

Arietta seemed to regard this Piece of Raillery as an Outrage done to her Sex; as indeed I have always observed that Women, whether out of a nicer Regard to their Honour, or what other Reason I cannot tell, are more sensibly touched with those general Aspersions, which are cast upon their Sex, than Men are by what is said of theirs.

When she had a little recovered her self from the serious Anger she was in, she replied in the following manner.Sir, when I consider, how perfectly new all you have said on this Subject is, and that the Story you have given us is not quite two thousand Years Old, I cannot but think it a Piece of Presumption to dispute with you: But your Quotations put me in Mind of the Fable of the Lion and the Man. The Man walking with that noble Animal, showed him, in the Ostentation of Human Superiority, a Sign of a Man killing a Lion. Upon which the Lion said very justly, We Lions are none of us Painters, else we could show a hundred Men killed by Lions, for one Lion killed by a Man. You Men are Writers, and can represent us Women as Unbecoming as you please in your Works, while we are unable to return the Injury. You have twice or thrice observed in your Discourse, that Hypocrisy is the very Foundation of our Education; and that an Ability to dissemble our affections, is a professed Part of our Breeding. These, and such other Reflections, are sprinkled up and down the Writings of all Ages, by Authors, who leave behind them Memorials of their Resentment against the Scorn of particular Women, in Invectives against the whole Sex. Such a Writer, I doubt not, was the celebrated Petronius, who invented the pleasant Aggravations of the Frailty of the Ephesian Lady; but when we consider this Question between the Sexes, which has been either a Point of Dispute or Raillery ever since there were Men and Women, let us take Facts from plain People, and from such as have not either Ambition or Capacity to embellish their Narrations with any Beauties of Imagination. I was the other Day amusing myself with Ligon's Account of Barbadoes; and, in Answer to your well-wrought Tale, I will give you (as it dwells upon my Memory) out of that honest Traveller, in his fifty fifth page, the History of Inkle and Yarico.

Mr. Thomas Inkle of London, aged twenty Years, embarked in the Downs, on the good Ship called the Achilles, bound for the West Indies, on the 16th of June 1647, in order to improve his Fortune by Trade and Merchandize. Our Adventurer was the third Son of an eminent Citizen, who had taken particular Care to instill into his Mind an early Love of Gain, by making him a perfect Master of Numbers, and consequently giving him a quick View of Loss and Advantage, and preventing the natural Impulses of his Passions, by Prepossession towards his Interests. With a Mind thus turned, young Inkle had a Person every way agreeable, a ruddy Vigour in his Countenance, Strength in his Limbs, with Ringlets of fair Hair loosely flowing on his Shoulders. It happened, in the Course of the Voyage, that the Achilles, in some Distress, put into a Creek on the Main of America, in search of Provisions. The Youth, who is the Hero of my Story, among others, went ashore on this Occasion. From their first Landing they were observed by a Party of Indians, who hid themselves in the Woods for that Purpose. The English unadvisedly marched a great distance from the Shore into the Country, and were intercepted by the Natives, who slew the greatest Number of them. Our Adventurer escaped among others, by flying into a Forest. Upon his coming into a remote and pathless Part of the Wood, he threw himself tired and breathless on a little Hillock, when an Indian Maid rushed from a Thicket behind him: After the first Surprize, they appeared mutually agreeable to each other. If the European was highly charmed with the Limbs, Features, and wild Graces of the Naked American; the American was no less taken with the Dress, Complexion, and Shape of an European, covered from Head to Foot. The Indian grew immediately enamoured of him, and consequently sollicitous for his Preservation: She therefore conveyed him to a Cave, where she gave him a Delicious Repast of Fruits, and led him to a Stream to slake his Thirst. In the midst of these good Offices, she would sometimes play with his Hair, and delight in the Opposition of its Colour to that of her Fingers: Then open his Bosome, then laugh at him for covering it. She was, it seems, a Person of Distinction, for she every day came to him in a different Dress, of the most beautiful Shells, Bugles, and Bredes. She likewise brought him a great many Spoils, which her other Lovers had presented to her; so that his Cave was richly adorned with all the spotted Skins of Beasts, and most Party-coloured Feathers of Fowls, which that World afforded. To make his Confinement more tolerable, she would carry him in the Dusk of the Evening, or by the favour of Moon-light, to unfrequented Groves, and Solitudes, and show him where to lye down in Safety, and sleep amidst the Falls of Waters, and Melody of Nightingales. Her Part was to watch and hold him in her Arms, for fear of her Country-men, and wake on Occasions to consult his Safety. In this manner did the Lovers pass away their Time, till they had learn'd a Language of their own, in which the Voyager communicated to his Mistress, how happy he should be to have her in his Country, where she should be Cloathed in such Silks as his Wastecoat was made of, and be carried in Houses drawn by Horses, without being exposed to Wind or Weather. All this he promised her the Enjoyment of, without such Fears and Alarms as they were there tormented with. In this tender Correspondence these Lovers lived for several Months, when Yarico, instructed by her Lover, discovered a Vessel on the Coast, to which she made Signals, and in the Night, with the utmost Joy and Satisfaction accompanied him to a Ships-Crew of his Country-Men, bound for Barbadoes. When a Vessel from the Main arrives in that Island, it seems the Planters come down to the Shoar, where there is an immediate Market of the Indians and other Slaves, as with us of Horses and Oxen.

To be short, Mr. Thomas Inkle, now coming into English Territories, began seriously to reflect upon his loss of Time, and to weigh with himself how many Days Interest of his Mony he had lost during his Stay with Yarico. This Thought made the Young Man very pensive, and careful what Account he should be able to give his Friends of his Voyage. Upon which Considerations, the prudent and frugal young Man sold Yarico to a Barbadian Merchant; notwithstanding that the poor Girl, to incline him to commiserate her Condition, told him that she was with Child by him: But he only made use of that Information, to rise in his Demands upon the Purchaser.

I was so touch'd with this Story, (which I think should be always a Counterpart to the Ephesian Matron) that I left the Room with Tears in my Eyes; which a Woman of Arietta's good Sense, did, I am sure, take for greater Applause, than any Compliments I could make her.

Text taken from Spectator, No. 11 (Tuesday, March 13, 1711) by Richard Steele. Full text of The Spectator from Gutenberg.org. 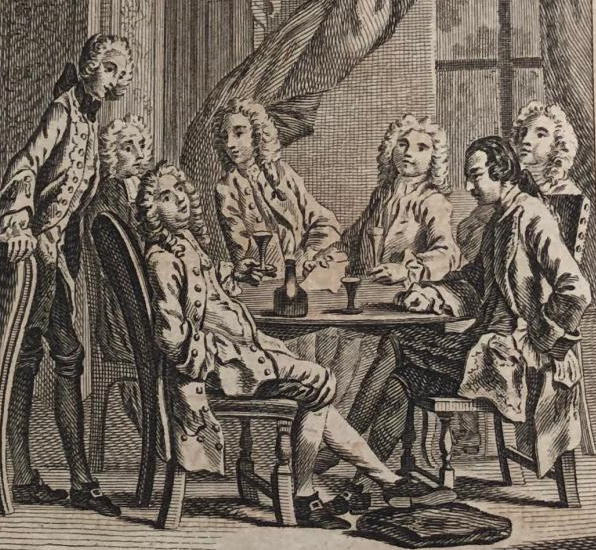