"One half of the company are following at the other’s tails, in an eternal circle; like so many blind asses in an olive-mill, where they can neither discourse, distinguish, nor be distinguished; while the other half are drinking hot water, under the denomination of tea, till nine or ten o’clock at night, to keep them awake for the rest of the evening."

London is literally new to me; new in its streets, houses, and even in its situation; as the Irishman said, ‘London is now gone out of town.’ What I left open fields, producing hay and corn, I now find covered with streets and squares, and palaces, and churches. I am credibly informed, that in the space of seven years, eleven thousand new houses have been built in one quarter of Westminster, exclusive of what is daily added to other parts of this unwieldy metropolis. Pimlico and Knightsbridge are now almost joined to Chelsea and Kensington; and if this infatuation continues for half a century, I suppose the whole county of Middlesex will be covered with brick.

It must be allowed, indeed, for the credit of the present age, that London and Westminster are much better paved and lighted than they were formerly. The new streets are spacious, regular, and airy; and the houses generally convenient. The bridge at Blackfriars is a noble monument of taste and public-spirit.—I wonder how they stumbled upon a work of such magnificence and utility. But, notwithstanding these improvements, the capital is become an overgrown monster; which, like a dropsical head, will in time leave the body and extremities without nourishment and support. The absurdity will appear in its full force, when we consider that one sixth part of the natives of this whole extensive kingdom is crowded within the bills of mortality. What wonder that our villages are depopulated, and our farms in want of day-labourers? The abolition of small farms is but one cause of the decrease of population. Indeed, the incredible increase of horses and black cattle, to answer the purposes of luxury, requires a prodigious quantity of hay and grass, which are raised and managed without much labour; but a number of hands will always be wanted for the different branches of agriculture, whether the farms be large or small. The tide of luxury has swept all the inhabitants from the open country—The poorest squire, as well as the richest peer, must have his house in town, and make a figure with an extraordinary number of domestics. The plough-boys, cow-herds, and lower hinds are debauched and seduced by the appearance and discourse of those coxcombs in livery, when they make their summer excursions. They desert their dirt and drudgery, and swarm up to London, in hopes of getting into service, where they can live luxuriously and wear fine clothes, without being obliged to work; for idleness is natural to man—Great numbers of these, being disappointed in their expectation, become thieves and sharpers; and London being an immense wilderness, in which there is neither watch nor ward of any signification, nor any order or police, affords them lurking-places as well as prey.

There are many causes that contribute to the daily increase of this enormous mass; but they may be all resolved into the grand source of luxury and corruption—About five and twenty years ago, very few, even of the most opulent citizens of London, kept any equipage, or even any servants in livery. Their tables produced nothing but plain boiled and roasted, with a bottle of port and a tankard of beer. At present, every trader in any degree of credit, every broker and attorney, maintains a couple of footmen, a coachman, and postilion. He has his town-house, and his country-house, his coach, and his post-chaise. His wife and daughters appear in the richest stuffs, bespangled with diamonds. They frequent the court, the opera, the theatre, and the masquerade. They hold assemblies at their own houses: they make sumptuous entertainments, and treat with the richest wines of Bordeaux, Burgundy, and Champagne. The substantial tradesman, who wont to pass his evenings at the ale-house for fourpence half-penny, now spends three shillings at the tavern, while his wife keeps card-tables at home; she must likewise have fine clothes, her chaise, or pad, with country lodgings, and go three times a week to public diversions. Every clerk, apprentice, and even waiter of tavern or coffeehouse, maintains a gelding by himself, or in partnership, and assumes the air and apparel of a petit maitre—The gayest places of public entertainment are filled with fashionable figures; which, upon inquiry, will be found to be journeymen taylors, serving-men, and abigails, disguised like their betters.

In short, there is no distinction or subordination left—The different departments of life are jumbled together—The hod-carrier, the low mechanic, the tapster, the publican, the shopkeeper, the pettifogger, the citizen, and courtier, all tread upon the kibes of one another: actuated by the demons of profligacy and licentiousness, they are seen every where rambling, riding, rolling, rushing, justling, mixing, bouncing, cracking, and crashing in one vile ferment of stupidity and corruption—All is tumult and hurry; one would imagine they were impelled by some disorder of the brain, that will not suffer them to be at rest. The foot-passengers run along as if they were pursued by bailiffs. The porters and chairmen trot with their burthens. People, who keep their own equipages, drive through the streets at full speed. Even citizens, physicians, and apothecaries, glide in their chariots like lightening. The hackney-coachmen make their horses smoke, and the pavement shakes under them; and I have actually seen a waggon pass through Piccadilly at the hand-gallop. In a word, the whole nation seems to be running out of their wits.

The diversions of the times are not ill suited to the genius of this incongruous monster, called the public. Give it noise, confusion, glare, and glitter; it has no idea of elegance and propriety—What are the amusements of Ranelagh? One half of the company are following at the other’s tails, in an eternal circle; like so many blind asses in an olive-mill, where they can neither discourse, distinguish, nor be distinguished; while the other half are drinking hot water, under the denomination of tea, till nine or ten o’clock at night, to keep them awake for the rest of the evening. As for the orchestra, the vocal music especially, it is well for the performers that they cannot be heard distinctly. Vauxhall is a composition of baubles, overcharged with paltry ornaments, ill conceived, and poorly executed; without any unity of design, or propriety of disposition. It is an unnatural assembly of objects, fantastically illuminated in broken masses; seemingly contrived to dazzle the eyes and divert the imagination of the vulgar—Here a wooden lion, there a stone statue; in one place, a range of things like coffeehouse boxes, covered a-top; in another, a parcel of ale-house benches; in a third, a puppet-show representation of a tin cascade; in a fourth, a gloomy cave of a circular form, like a sepulchral vault half lighted; in a fifth, a scanty flip of grass-plat, that would not afford pasture sufficient for an ass’s colt. The walks, which nature seems to have intended for solitude, shade, and silence, are filled with crowds of noisy people, sucking up the nocturnal rheums of an aguish climate; and through these gay scenes, a few lamps glimmer like so many farthing candles.

When I see a number of well dressed people, of both sexes, sitting on the covered benches, exposed to the eyes of the mob; and, which is worse, to the cold, raw, night-air, devouring sliced beef, and swilling port, and punch, and cyder, I can’t help compassionating their temerity; white I despise their want of taste and decorum; but, when they course along those damp and gloomy walks, or crowd together upon the wet gravel, without any other cover than the cope of Heaven, listening to a song, which one half of them cannot possibly hear, how can I help supposing they are actually possessed by a spirit, more absurd and pernicious than any thing we meet with in the precincts of Bedlam? In all probability, the proprietors of this, and other public gardens of inferior note, in the skirts of the metropolis, are, in some shape, connected with the faculty of physic, and the company of undertakers; for, considering that eagerness in the pursuit of what is called pleasure, which now predominates through every rank and denomination of life, I am persuaded that more gouts, rheumatisms, catarrhs, and consumptions are caught in these nocturnal pastimes, sub dio, than from all the risques and accidents to which a life of toil and danger is exposed.

These, and other observations, which I have made in this excursion, will shorten my stay at London, and send me back with a double relish to my solitude and mountains; but I shall return by a different route from that which brought me to town. I have seen some old friends, who constantly resided in this virtuous metropolis, but they are so changed in manners and disposition, that we hardly know or care for one another—In our journey from Bath, my sister Tabby provoked me into a transport of passion; during which, like a man who has drank himself pot-valiant, I talked to her in such a stile of authority and resolution, as produced a most blessed effect. She and her dog have been remarkably quiet and orderly ever since this expostulation. How long this agreeable calm will last, Heaven above knows—I flatter myself, the exercise of travelling has been of service to my health; a circumstance which encourages me to-proceed in my projected expedition to the North. But I must, in the mean time, for the benefit and amusement of my pupils, explore the depths of this chaos; this misshapen and monstrous capital, without head or tail, members or proportion.

Thomas was so insolent to my sister on the road, that I was obliged to turn him off abruptly, betwixt Chippenham and Marlborough, where our coach was overturned. The fellow was always sullen and selfish; but, if he should return to the country, you may give him a character for honesty and sobriety; and, provided he behaves with proper respect to the family, let him have a couple of guineas in the name of 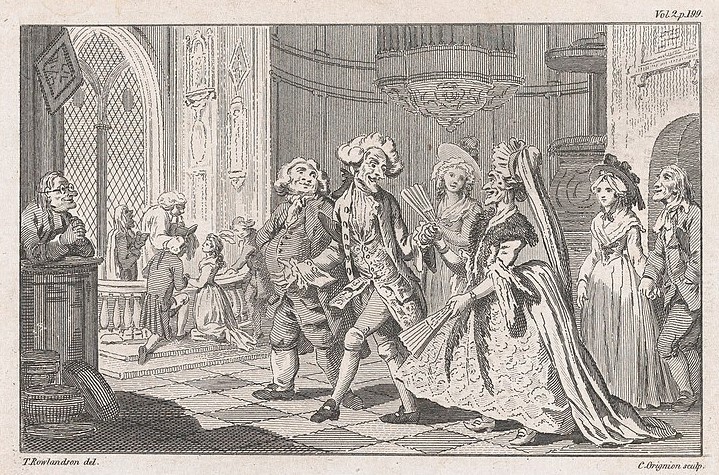