The Trial of Thomas Hardy for High Treason (1794)

Q. What may your business, or professions be?
A. A dancing master.
Q: Were you a Member of the Constitutional Society ?
A. Yes.
Q. You were a Member of both Societies?
A. Yes.
Q: When were you elected a Member of the Corresponding Society?
A. I imagine better than two years ago.
Q: How long have you belonged to the Constitutional Society?
A. Soon after I became a Member of the Corresponding Society;  I wished to be a Member of the Constitutional Society from a wish to hear clever men speak, not having it in my power to go to the House of Parliament, where I could have heard more clever men undoubtedly.
Q. You heard several men speak upon politics?
A. I have heard several very clever speeches.
Q. Were they clever speeches by clever men?
A. You must judge whether they were clever speeches.
Q. Did they strike you as clever speeches from clever men?
A. I heard one or two, I thought, clever speeches.
Q. You took up your idea of politics from them?
A. I took my rule of politics from public report, and from the debates in both Houses of Parliament.
Q. You did not go to these Societies to read the public papers, or to read the debates in both Houses of Parliament?
A. I had not time in general to read the public papers.
Q. Which way then did you get your information?
Wills. What information ?
Mr. Bower. Upon politics; you said you went there not have ing an opportunity of attending both Houses of Parliament?
A. I did not say that; I said I went there to hear clever men speak.
Q. Upon what subject?
A. Upon any subjects.
Q. Were any subjects discussed that did not relate to politics?
A. I never heard one to my knowledge.
Q. Upon your oath, when you went there, did you expect to hear any discussion upon any subject but politics ?
A. It was called the Constitutional Society.
Q. That is no answer to my question; when you went there; you said, you went there because you had no opportunity of attending the Houses of Parliament, and went to hear clever men speak; upon what subject did you go expecting to hear them speak?
A. Upon Constitutional subjects.
Q. And those only?
A. Those only.
Q. Was that the place where you took up your constitutional doctrine ?
A. Long before that.
Q. From the newspapers ?
A. Sometimes I have had the honour of being in the Honourable House of Commons to hear the debates.
Q. And you went to the Constitutional Society, not having opportunities to attend the House of Commons, to supply that defect?
A. Not to supply that defect merely, but to hear different political subjects discussed.
Q. You had no other means of supplying the information?
A. Not any that I thought better.
Q. Did you attend frequently?
A. You may be better informed than I am.
Q. I know nothing. I ask you?
A. I never kept any minutes of my attendance there.
Q. Did you not, upon your oath, attend them weekly?
A. When I could, I did; and might for a month together when I could; but I cannot be upon my oath to say, that I did attend them weekly; I was happy to attend them weekly when I could.
Lord Chief Justice Eyre. You mean you attended them as often as you could?
A. Yes.
Mr. Bower. Were you at all acquainted with the proceedings of the Society?
A. Very little ; I never looked into their books.
Q: Then you did not know of any of their transactions which might bring some of them, or those they employed, into difficulties?
A. No.
Q. You never knew that any body was prosecuted for affifting them in their views?
A. Never.
Q. Did you never hear of one William Carter?
A. Never.
Q. Then, of course, you never heard that he was in confinement at all?
A. Stay, Mr. Counsel, give me leave to say, I was in company with a Mr. Carter, a musician, at the London Coffee-house.
Q: Do you recollect Carter, the bill sticker?
A. I am not, in a moment, to be told that I recollect such a man if I do not; I heard of such a man, that he was in prison; I never saw him in prison; for sticking up a posting bill.---You asked me if I knew such a man? I do not; I heard of him.
Q. You heard nothing more of him but that there was such a man?
A. I heard there was.
Q. That is all? -- You never heard that there was a subscription entered into for him ?
A. Yes; perhaps, I gave him a shilling, or half-a-crown, or a guinea, or five guineas, towards his relief, in confinement; but I do not know that I did to maintain him in his confinement; I did not recollect the name of Carter any more than I do your's.
Q. That is then what you now mean to swear distinctly, for I will not let you now go back?
A. I do not say I gave two guineas, or five, but I only say I subscribed something, perhaps, to the poor man's family. Q. Did not you say two or five guineas?
A. I often give five guineas without knowing to whom I give it. 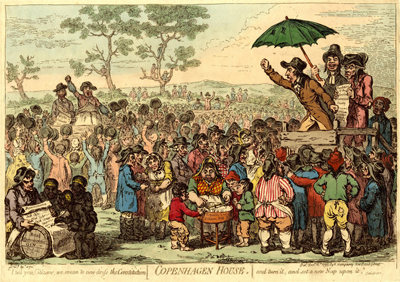