"People of all sorts of diseases and distempers doe daily so flock about his house, that if he had not appointed them three dayes in the week, as I formerly mentioned, he must have forsaken his own dwelling to have gotten rest."

Link to the Encyclopedia : Valentine Greatrakes

Having heard of many diseases healed and cured by Valentine Gertrux of Affans, divers of them seemed so strange to mee, that I could not give credit to the re∣ports; nor could I be satisfied till I went up thither my self, which I did on White-munday, purposing  to have returned by water in the same boat: But he being gone from home with intention to be back a∣gain on Tuesday morning early (that being one of the three dayes in the week that he hath appointed for touching diseased and distemper'd persons of all ages and Sexes) I stayed above at Capo Coyne that night, and went early in the morning to Affans, to a certain house about a flight shot off his own; whether he had ap∣pointed the people to come, because of the multitude flocking about his own dwelling house: So I went in, and stood close by him, and saw him to stroak them, causing them to strip off their Cloaths, where their paines and griefs were: I saw him touch many of the Kings Evil while I was there, and many also whom he had cured of that Distemper, came to acknowledge it, which is the utmost reward he accepts from any: I saw him heal eight persons of the dead Palsey in their Armes and Legs; whom, after he had touched and stroaked them, he caused to be lifted up, and they had instantly the right use of their Limbs: The same day I saw him touch 60 and odd persons, divers of them troubled with the falling sickness, and of them, some surprized and taken by it in the same Room: He being called to their help, left other Patients and went to them, and while they were foaming at the mouth, and wallowing on the ground, he stroaked their breast with his hand, and immediately their pain ceased, and they stood up and said, that they were very well. — I also saw him restore many deaf persons to their hear∣ing presently, not failing any one therein, and this only by stroaking, and putting his fingers into the holes of their Eares. He likewise cures the Convul∣sion fits only by stroaking the persons afflicted with his hand: I saw divers poor Cripples came in halting on their Crutches, whom when he had stroaked on their Legs, or Armes, (as their paines lay) they pre∣sently not onely walked, but leaped and skipped about the room: One of them not minding his crutches, left them behinde him in the room, but he called him back again, saying, Friend take away thy cruches, for I hope here will be no need of them; so the poor man went forth merrily with them in his hand.

He takes away all sorts of pain, and old Aches, though of twelve, sixteen, or twenty years continu∣ance, or longer, onely with stroaking and smoothing the part greived with his hand: immediately upon laying his hand upon the part, the pain removes sen∣sibly into another part of the body; as, from the back to the breast, from thence into the legs and arms, or other extream parts, and when the party telleth him where it is removed, he followeth it with his hand, which driveth it out, sometimes at the fingers ends, sometimes at the toes, other times at the crown of the head, and sometimes at the mouth, and when the person saith, it is gone, and he feeleth no more pain, he biddeth him be gone and glorify God, and forsake his sins: He doth it freely unto all, and is so far from taking any reward, that he doth not allow them to give him thanks, but bids them praise and thank the Lord, for that he hath vouchsafed to make use of such a poor simple Creature, as he doth, to doe them good.

People of all sorts of diseases and distempers doe daily so flock about his house, that if he had not appointed them three dayes in the week, as I formerly mentioned, he must have forsaken his own dwelling to have gotten rest. Some out of prejudice say, that he hath an universal charme againg all diseases; but this is onely a detraction, he onely calleth upon the name of God whilest he is doing of it, and though breifly yet divinely: Thus have I given you a true account of that, whereof I was both an Ear and an Eye witness, which had I not been, I think I should not have believed, though all the People in Youghall had told me of it.

Text taken from Lyonell Beacher, Wonders if not miracles, or, A relation of the wonderful performances of Vanlentine Gertrux of Assance neer Youghall in Ireland who cureth all manner of diseases with a stroak of his hand and prayer as is testified by many eare and eye witnesses (London, 1665), p. 5-8. Full text at EEBO-TCP. 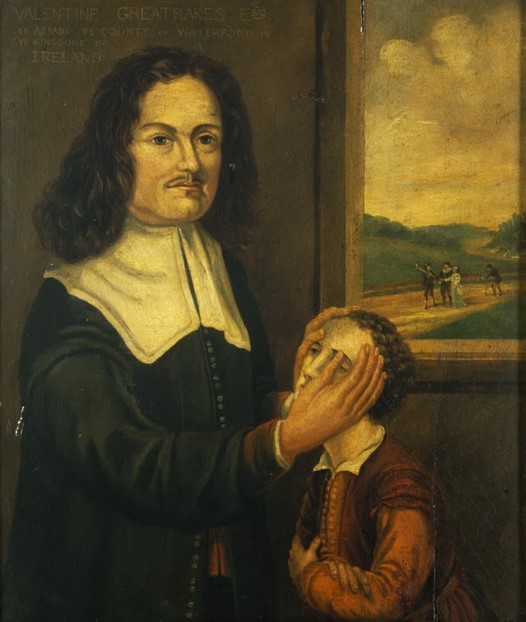