"The rational intercourse kept up by conversation, is one of our principal distinctions from brutes. We should therefore endeavour to turn this peculiar talent to our advantage..."

In the comedy of ‘The Frenchman in London,’ which we are told was acted at Paris with universal applause for several nights together, there is a character of a rough Englishman, who is represented as quite unskilled in the graces of conversation; and his dialogue consists almost entirely of a repetition of the common salutation of How do you do? How do you? Our nation has, indeed, been generally supposed to be of a sullen and uncommunicative disposition; while, on the other hand, the loquacious French have been allowed to possess the art of conversing beyond all other people. The Englishman requires to be wound up frequently, and stops as soon as he is down; but the Frenchman runs on in a continual alarum. Yet it must be acknowledged, that, as the English consist of very different humours, their manner of discourse admits of great variety: but the whole French nation converse alike; and there is no difference in their address between a marquis and a valet-de-chambre. We may frequently see a couple of French barbers accosting each other in the street, and paying their compliments with the same volubility of speech, the same grimace and action, as two courtiers on the Thuilleries.

I shall not attempt to lay down any particular rules for conversation, but rather point out such faults in discourse and behaviour, as render the company of half mankind rather tedious than amusing. It is in vain, indeed, to look for conversation, where we might expect to find it in the greatest perfection, among persons of fashion: there it is almost annihilated by universal card-playing: insomuch that I have heard it given as a reason, why it is impossible for our present writers to succeed in the dialogue of genteel comedy, that our people of quality scarce ever meet but to game. All their discourse turns upon the odd trick and the four honours: and it is no less a maxim with the votaries of whist than with those of Bacchus, that talking spoils company.

Every one endeavours to make himself as agreeable to society as he can: but it often happens, that those who most aim at shining in conversation, overshoot their mark. Though a man succeeds, he should not, as is frequently the case, engross the whole talk to himself; for that destroys the very essence of conversation, which is talking together. We should try to keep up conversation like a ball bandied to and fro from one to the other, rather than seize it all to ourselves, and drive it before us like a foot-ball. We should likewise be cautious to adapt the matter of our discourse to our company and not talk Greek before ladies, or of the last new furbelow to a meeting of country justices.

But nothing throws a more ridiculous air over our whole conversation, than certain peculiarities easily acquired, but very difficultly conquered and discarded. In order to display these absurdities in a truer light, it is my present purpose to enumerate such of them as are most commonly to be met with; and first to take notice of those buffoons in society the Attitudinarians and Face-makers. These accompany every word with a peculiar grimace or gesture: they assent with a shrug, and contradict with a twisting of the neck; are angry by a wry mouth, and pleased in a caper or a minuet step. They may be considered as speaking Harlequins; and their rules of eloquence are taken from the posture-master. These should be condemned to converse only in dumb show with their own persons in the looking-glass: as well as the smirkers and smilers, who so prettily set off their faces, together with their words, by a je-ne-sçai-quoi between a grin and a dimple. With these we may likewise rank the affected tribe of mimics, who are constantly taking off the peculiar tone of voice or gesture of their acquaintance: though they are such wretched imitators, that, like bad painters, they are frequently forced to write the name under the picture, before we can discover any likeness.

Next to these, whose elocution is absorbed in action, and who converse chiefly with their arms and legs, we may consider the Professed Speakers. And first, the emphatical; who squeeze, and press, and ram down every syllable with excessive vehemence and energy. These orators are remarkable for their distinct elocution and force of expression: they dwell on the important particles of and the, and the significant conjunctive and; which they seem to hawk up with much difficulty out of their own throats, and to cram them, with no less pain, into the ears of their auditors. These should be suffered only to syringe, as it were, the ear of a deaf man, through a hearing-trumpet: though I must confess, that I am equally offended with the whisperers, or low-speakers, who seem to fancy all their acquaintance deaf, and come up so close to you, that they may be said to measure noses with you, and frequently overcome you with the full exhalations of a stinking breath. I would have these oracular gentry obliged to talk at a distance through a speaking trumpet, or apply their lips to the walls of a whispering gallery. The wits, who will not condescend to utter any thing but a bon mot, and the whistlers or tune hummers, who never articulate at all, may be joined very agreeably together in concert: and to these tinkling cymbals I would also add the sounding brass, the bawler, who inquires after your health with the bellowing of a town-crier.

The Tatlers, whose pliable pipes are admirably adapted to the ‘soft parts of conversation,’ and sweetly ‘prattling out of fashion,’ make very pretty music from a beautiful face and a female tongue; but from a rough manly voice and coarse features, mere nonsense is as harsh and dissonant as a jig from a hurdy-gurdy. The Swearers I have spoken of in a former paper; but the Half-swearers, who split, and mince, and fritter their oaths into gad’s bud, ad’s fish, and demmee, the Gothic Humbuggers, and those who ‘nick-name God’s creatures,’ and call a man a cabbage, a crab, a queer cub, an odd fish, and an unaccountable muskin, should never come into company without an interpreter. But I will not tire my readers’ patience by pointing out all the pests of conversation; nor dwell particularly on the Sensibles, who pronounce dogmatically on the most trivial points, and speak in sentences; the Wonderers, who are always wondering what o’clock it is, or wondering whether it will rain or no, or wondering when the moon changes; the Phraseologists, who explain a thing by ‘all that,’ or enter into particulars with this and that and t’other; and lastly, the Silent Men, who seem afraid of opening their mouths, lest they should catch cold, and literally observe the precept of the Gospel, by letting their conversation be only yea yea, and nay nay.

The rational intercourse kept up by conversation, is one of our principal distinctions from brutes. We should therefore endeavour to turn this peculiar talent to our advantage, and consider the organs of speech as the instruments of understanding: we should be very careful not to use them as the weapons of vice or tools of folly, and do our utmost to unlearn any trivial or ridiculous habits, which tend to lessen the value of such an inestimable prerogative. It is, indeed, imagined by some philosophers, that even birds and beasts, though without the power of articulation, perfectly understand one another by the sounds they utter; and that dogs, cats, &c. have each a particular language to themselves, like different nations. Thus it may be supposed, that the nightingales of Italy have as fine an ear for their own native wood-notes, as any Signor or Signora for an Italian air; that the boars of Westphalia gruntle as expressively through the nose as the inhabitants in High German; and that the frogs in the dykes of Holland croak as intelligibly, as the natives jabber their Low Dutch. However this may be, we may consider those, whose tongues hardly seem to be under the influence of reason, and do not keep up the proper conversation of human creatures, as imitating the language of different animals. Thus, for instance, the affinity between Chatterers and Monkeys, and Praters and Parrots, is too obvious not to occur at once: Grunters and Growlers may be justly compared to Hogs: Snarlers are Curs, that continually show their teeth, but never bite; and the Spitfire passionate are a sort of wild Cats, that will not bear stroking, but will purr when they are pleased. Complainers are Screech-owls; and Story-tellers, always repeating the same dull note, are Cuckoos. Poets, that prick up their ears at their own hideous braying, are no better than Asses: Critics in general are venomous Serpents, that delight in hissing; and some of them, who have got by heart a few technical terms without knowing their meaning, are no other than Magpies. I myself, who have crowed to the whole town for near three years past, may perhaps put my readers in mind of a Dunghill-cock; but as I must acquaint them, that they will hear the last of me on this day fortnight, I hope they will then consider me as a Swan, who is supposed to sing sweetly at his dying moments. 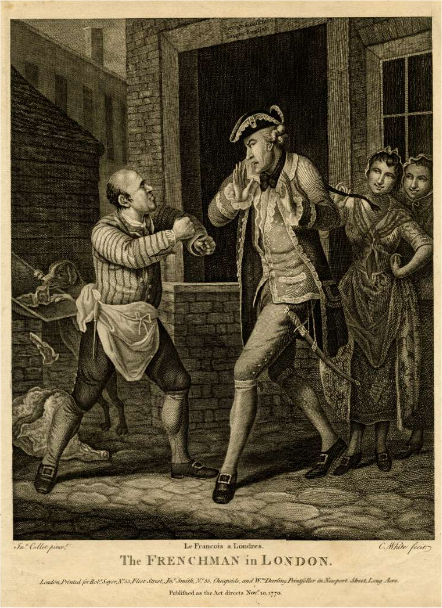