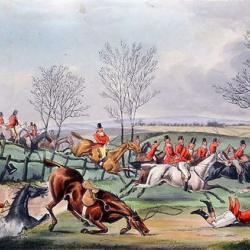 GRIFFIN Emma
Hunting had been the foremost recreation of British kings, nobles and elites since the middle ages, but the hunting of the fox had traditionally been held in low esteem. Foxes were vermin and so lacked the status that had made hunting a noble pursuit for centuries. In contrast to other coveted quarry – deer, boar, pheasant, partridge, and hare – the fox’s flesh is unpalatable and inedible; and unlike other animals of prey, the fox poses no danger to human life.