Sociabilities on the Move in the Long Eighteenth Century (1650-1850)

Witnessing Masculinity: Sociability and Its Purposes on the Grand Tour

This keynote paper re-evaluates the role of sociability as one of fundamental importance to the Grand Tour agenda. The act and process of socialising with fellow Grand Tourists, older compatriots abroad and foreign societies was, in turns, a formative experience, an international debut, and a tool for expanding and affirming networks of influence. Crucially, sociability offered an important means of providing witness to the diverse performances and assertions of masculine identity that young elite men were expected to undertake
Grand Tour sociability took place in motion. Shifting across a diverse range of locations that spanned the courts, saloons and ballrooms of Paris and Vienna, the hunting runs of Savoy, the battlefield of Bavaria and the glaciers of Switzerland, this offered both opportunities and challenges. Under pressure to make a successful debut and keenly scrutinized by peers and elders, Grand Tourists sought to navigate the dual expectations placed upon them by the shifting dictates of sociability and masculinity, at times in contexts that hazarded more than their reputations.

Sarah Goldsmith is a Chancellor’s Fellow at the University of Edinburgh. Prior to this, she undertook her PhD at the University of York, and held a Leverhulme Early Career Fellowship at the University of Leicester. She has several publications on the eighteenth-century Grand Tour, including her first monograph, Masculinity and Danger on the Eighteenth-Century Grand Tour (University of London Press, 2020). Her current research explores interdisciplinary approaches to the history of the eighteenth, nineteenth and early twentieth-century male bodies. She is a AHRC/BBC 2018 New Generation Thinker and a historical consultant for the V&A’s 2022 'Fashioning Masculinities: The Art of Menswear' exhibition.

The Rules of the Road: The Sociability of the Street in the Eighteenth-Century Town

Urban streets and rural roads form the most demotic of social spaces. They were where the gentleman met the beggar, and the pickpocket his mark. It was where goods were hawked, and where lovers went when they 'walked out together'. This talk seeks to do three things. First, it places the sociability of the street in a wider historiographical context, asking what roles public encounters served in the negotiations of class and gender? And second, it suggests that conceptualising street encounters as part of a longer journey - from home to home, via pub and shop - allows us to more fully understand the meaning of each individual encounter. And finally, it asks if digital methods provide a useful way of modelling early modern street sociability, and of telling more powerful histories.

Tim Hitchcock is Professor Emeritus of Digital History at the University of Sussex. He has published widely on the histories of gender, sexuality and poverty focussed primarily on eighteenth-century London. With Professor Robert Shoemaker and others he has also created a series of websites helping to give direct public access to 37 billion words of primary sources evidencing the history of Britain. Designed to underpin the writing of a new 'history from below', these sites include: The Old Bailey Online, 1674 to 1913; London Lives, 1690-1800; Locating London's Past; Connected Histories; and The Digital Panopticon: The Global Impact of London Punishments, 1780-1925. He has also been instrumental in developing new approaches to and tools for the analysis of historical data. Hitchcock's first degree was from the University of California at Berkeley (1980) and his DPhil from the University of Oxford (1985). He served as co-director of the Sussex Humanities Lab from 2014, and director from 2019 to 2021.

What Did British People Really Think About Europe? European Sociability and the Geographical Imagination

Paul Stock’s keynote lecture discusses the idea of ‘Europe’ in British popular mentalities of the eighteenth century. How did British people define Europe in spatial and social terms? Did they consider themselves to be Europeans? Stock uses the findings of his recent Oxford University Press volume – Europe and the British Geographical Imagination – to address these questions. He argues that to understand British attitudes to Europe, we need to study the widely-read geographical texts of the period, and not just the works of prominent intellectuals. He discusses in particular how theories about climate change and empire inform ideas about Europe in eighteenth-century Britain. Certain social activities and goals can simultaneously define the superiority of specific polities; the shared aptitude of all European states; and the presumed aspirations of the whole world. In this way, British identity in this period is bound up with ideas about European commonality and with assumptions about global progress.

Paul Stock is Associate Professor of Early Modern History 1500-1850 at the London School of Economics and Political Science, a Fellow of the Royal Historical Society, and a Fellow of the Royal Geographical Society. His publications include Europe and the British Geographical Imagination, 1760-1830 (2019), The Uses of Space in Early Modern History (editor, 2015), and The Shelley-Byron Circle and the Idea of Europe (2010).

For the past ten years, the research work carried out by the international network formalized into the GIS Sociabilités/Sociability in 2017 has opened new paths in sociability studies by adopting an interdisciplinary and comparative approach. Building on the traditional historiography of social historians such as Maurice Agulhon, Norbert Elias, Daniel Roche or Peter Clark, our research has first focused on the emergence, evolution and resistance of British forms of sociability interpreted in national and transnational contexts, before shedding light on the importance of mutual exchanges, influences and tensions in the (re)definition of models of sociability in the long eighteenth century. Part of this research output is now available online on the DIGIT.EN.S website (www.digitens.org), a digital encyclopedia platform to be enriched in the coming months with new entries.

The dynamics of circulations in European and colonial societies has revealed the centrality of movement as a concept to grasp the ever-changing nature and function of sociability. Movement is a dynamic concept and process expressed and materialised through a variety of terms and actions: evolution, transformation, circulation, change, transport, mobility, transfer, exchange…

The commercial and colonial expansion as well as the Enlightenment debates on man and society contributed to a significant shift in both practices and discourses, fostering a far more dynamic conception of the social and sociable man. Moreover, the emergence of new sciences such as chemistry and anthropology in the second half of the eighteenth century set matter and bodies in motion, affected by an interplay of flux, powers and forces. The anxiety generated by this rising interest in phenomena of production, degeneration, transience and liminality paradoxically strengthened discourses promoting moral values of refinement and improvement, as well as a reflexive understanding of sociality.

Against a Western logic of space as abstract, stable, ordered and homogeneous, the concept of “movement” can offer a novel framework for the interpretation and analysis of sociabilities on the move. As underscored by Tim Ingold, “lives […] are never exclusively here or there, lived in this place or that, but always on the way from one place to another” (Kirby 32). Movement is at the core of the individual’s social life, providing opportunities of mobility or transgression, and as such is inevitably bound up with issues of control, hierarchy and exclusion. Movement stimulates by defying political and social strictures: de-familiarizing the gaze, shifting perspectives, creating fresh connections, making boundaries more permeable, enabling new prospects. It is the primal sign of life as well as the engine of social interaction, therefore key to research on sociabilities.

This international conference aims to explore new insights on forms, models and practices of sociability interpreted and analysed through the prism of movement. As such, it will conclude the H2020 DIGITENS project launched in January 2019 and initiate the new scientific programme of the GIS Sociabilités/Sociability.

We welcome proposals for individual papers (20-25 minutes given in English or French) or already constituted panels (3 papers) from various disciplinary fields (history, philosophy, art history, history of science, geography, sociology, anthropology, ethnology, literature, cultural studies, postcolonial studies). We encourage innovative methodologies and approaches as well as the use of digital technologies and techniques for the collection, storage, analysis and presentation of data.

A session of the conference will be dedicated to graduate students. We thus encourage graduate students from the institutions belonging to the DIGITENS consortium or to the GIS Sociability and working on a topic related to eighteenth-century sociability to submit a proposal for a poster presentation of their research work (10 minutes in French or English).

* Language and ideas: definitions and periodization of sociability

- The changing nature and meaning of the concept of sociability as a value and as a practice from 1650 to 1850: lexical, semantic and philosophical evolution

- The gradual distinction between the adjectives ‘social’ and ‘sociable’, tracing both the various practices and the discourses that participate in definitions of sociability

- The evolution of the concept through changing practices, places and contexts (social, cultural, political, geopolitical)

- The identification of transitional periods in the conceptualization of sociability.

* Sociability as a driving force

- The definition or theorization of sociability as a drive from self to other and from self to social group: social inclination, sympathy, affect, sentiment, emotion…

-  The literary and visual representations of sociability as a drive

- The importance of materiality in fostering or fuelling the sociable move: objects, places …

- The changing interpretations of social withdrawal, self-isolation or solitude

- The role of food, drink and specific venues in hospitable practices
- The sociable character of the traveller

* Sociability in travelogues
- The formation of transnational sociabilities during the Grand Tour, picturesque tourism or other forms of voyage (spa, seaside …)

- The representation of sociability in travel narratives and touristic guides

* Sociability and modes of transportation

- The impact of means of transportation on the sociable experience

- The circulation of ‘sociable objects’ and their influence on fashions, social and cultural values and practices of sociability

- The growth of commerce and trading companies as engines of sociability

- Sociability and the rise of world diplomacy

- Maritime travel and the expansion of global communication and exchange

- The redefinition or reconfiguration of sociability when the individual or the group is forced to leave one’s country: exile, revolution, slavery.

- The role played by contact zones in the evolution of sociability

- The influence of cultural differences on forms and representations of sociability

- The reactions to settlement experiences and how they reshape norms and practices of sociability. Analysing the processes at work: conflict, rejection, adaptation, appropriation…

* The effects of movement on sociability

- Movement contributing to the growth and progress of sociability

- Social and political emancipation through collective action and reform

* The circulation of models

- The exportation or transfer of models and practices of sociability

- The effect of foreign sociable models on the traveller

* Immobility or the reinvention of sociability

- Immobility as fostering new forms or practices of sociability

- Social interactions and social behaviours during experiences of confinement, imprisonment, captivity or other situations of forced mobility.

Following the conference, a selection of papers will be published. 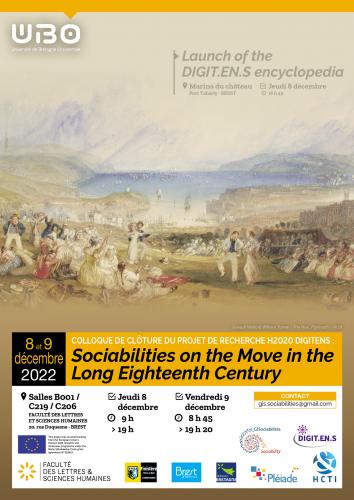 CFP - Sociability in Politics, Food and Travel in the Early Modern Era

Sociability in Politics, Food and Travel in the Early Modern Era 8-10 June 2023, in-person at the University of Warwick Call for Papers Proposal deadline: 31 January 2023 The Early Modern ...