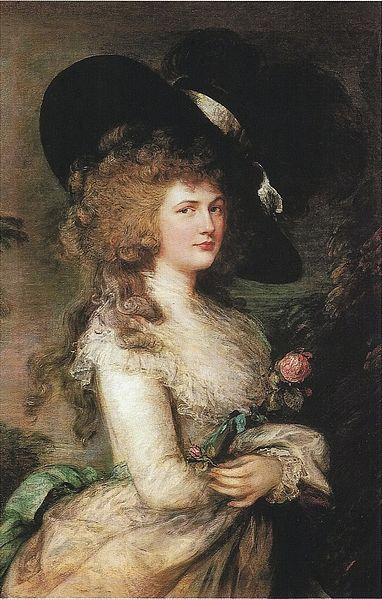 Georgiana Cavendish, the fifth Duchess of Devonshire (1757-1806), was the eldest daughter of John Spencer, the first Earl of Spencer. During her childhood the Spencers travelled widely and when at home they entertained celebrated literary and political figures. As a result of this early exposure she developed an outward sophistication and a manner that was described by many as charming. Cavendish was noted for putting everyone with whom she came into contact at ease in conversation. During the summer of 1772, while staying with her family at Spa in the Southern Netherlands, she met William Cavendish, fifth Duke of Devonshire (1748–1811), and the match was encouraged by her parents although both they and she were aware that she was unprepared for the duties inherent in being a duchess at the head of a powerful political family.

Several observers thought the lively and intelligent Cavendish and the uncommunicative and emotionally inexpressive Duke of Devonshire ill matched. None the less both parties remained set on the union, the anticipation of which had generated a large amount of publicity; there had been no Duchess of Devonshire for two decades and society looked forward to the great Whig dynasty of Cavendish once more having a hostess to revive the splendour of Devonshire House. Cavendish’s charm and charisma made her compelling as noted by Horace Walpole, who recorded that ‘her youth, figure, flowing good nature, sense and lively modesty, and modest familiarity, make her a phenomenon’.1  The lack of spousal interest other than to bear an heir, the critical scrutiny of her newly extended family and her youth pushed Cavendish towards creating her own circle of friends, and her noted charm, high spirits and high rank made her a social sensation with the ‘bon ton’.

Cavendish became the figurehead of the fashionable world and all that she did, said and wore was widely reported and imitated. She popularized the much-satirized (and prohibitively expensive) ostrich-feather headdress and when painted by Gainsborough in an oversized, broad-brimmed ‘picture hat’, the demand for outsize headwear was apparently as insatiable as that for ostrich feathers. Such was her popularity that the mere association of her name with a performer, a play, a book, a style of dress, piece of china or even shade of brown could ensure success. Cavendish was also highly acclaimed in Paris and counted Queen Marie-Antoinette among her intimate friends, which merely added to her social éclat back home.

Despite occupying an apparently enviable position within the upper echelons of the social hierarchy, Cavendish confided to her friend Mary Graham, who was not an occupant of the same social circles, that she felt trapped: ‘When I first came into the world the novelty of the scene made me like everything’, she wrote ‘But my heart now feels an emptiness in the beau monde which cannot be filled […] nobody can think how much I am tired sometimes with the dissipation I live in’.2  These feelings of dissatisfaction found full expression a year later. In 1779 Cavendish anonymously published The Sylph, an epistolary novel that owes a debt to Frances Burney’s Evelina (1778); Burney was initially thought to have been the author. The Sylph tells of an ingénue’s entry into high society as the newly acquired bride of notorious rake, Sir William Stanley. At first Julia Stanley’s letters home contain her laughing astonishment at the vacuity and pace of living à la mode, but as the novel progresses her amusement turns to fear as she is exposed to the darker side of high society, populated by blackmailers, wife-beaters, potential rapists, adulterers and suicides. The eponymous character is a guardian spirit that appears in response to Julia’s heartfelt cry for the need of someone to guide her through the dangers of this strange new world, and who is ultimately revealed to be Julia’s childhood sweetheart Henry Woodley. Cavendish repeatedly uses a specific vocabulary to describe Julia’s frenetic social activities, such as ‘whirled away’ and being caught in a ‘vortex of folly and vice’, suggestive of a lack of sociability in high society.3 As each participant rushes from one activity to the next there is no time for the kind of social interaction that resulted in self-reflection and self-improvement that epitomised eighteenth-century sociability. In fact reflection is positively scorned by Sir William, who declares ‘Reflect! Oh that is so outré I hate reflection. Reflection cost poor D- his life the other day. He, like me, could not bear reflection’, to which Julia responds ‘I tremble to hear you thus speak lightly of that horrid event.’ (The Sylph, VI, 233) The ‘horrid event’ that Julia is referring to is the real-life suicide of John Damer, the estranged husband of sculptor Anne Damer, a close friend of Cavendish. By August 1775, despite being the heir to £30,000 a year fortune, John Damer had accrued debts of near to £70,000. Having been refused aid by his father, Lord Milton, Damer shot himself in an upstairs room in the Bedford Arms in Covent Garden. Gambling is portrayed as the root of all ills in The Sylph as it promotes a form of anti-social sociability, as the activity precludes any possibility of conversation or interaction.

The Connoisseur, a weekly London newspaper founded by George Colman the Elder, describes the gambler as one who ‘would ruin his own brother, if it might be any advantage to himself’ and pronounced that gambling did not foster the rational tone of mutual improvement but instead produced ‘lies, oaths, […] the most bitter and opprobrious expressions […] envy, dissimulation, malice and revenge’.4  To gamble meant to be isolated whilst in company and to ignore the normal rules of social intercourse. The Lady’s Magazine opined that ‘people used to formally meet together’ in order ‘to improve our friends or ourselves’ but ‘ever since the card table has been in fashion all the pleasures of speech has been suppressed’.5  This silencing of improving advice from friends and family may well have been the initial attraction to gambling for Cavendish in the early years of her marriage, and also for her fictional creation Julia: having resisted the fashionable pastime, Julia succumbs when she discovers just how little she means to her husband and her new circle of acquaintances, despite their constant presence in her house and commentary upon her person. At least while all were gambling, all gossip, scandal and ‘improving’ conversation ceased as all eyes were focussed on the turn of the next card.

Julia’s initial enthusiasm hints at the joy of gambling as an escape from the advice and ‘improving conversation’ that seeks to mould her into a fashionably contorted shape in both body and morality, though Cavendish can only allude to this pleasurable aspect because of her own accumulating gambling debts, the full extent of which were not known until after her death. Julia’s foray into the fashionable pursuit of gambling is brief because she has the will to resist the whirlpool effect, whereas Stanley is not only a slave to the ‘here and now’ in terms of immediate gratification, but also the well-trodden and fashionable path to suicide. Cavendish’s novel is a consideration of the relationship between high society, sociability and suicide and reveals a clash between a man of honour, indicated by his rank and lives in high society, and the practitioner of true sociability. The Sylph shocked critics, primarily because it was by a ‘young lady’ who, according to the Gentleman’s Magazine, demonstrated ‘too great a knowledge of the ton, and of the worst, though perhaps the highest part of the world’. Not only did Cavendish have ‘too great a knowledge’ of the fashionable world, but the novel also indicates proximity to the events and the experiences that produce a ‘knowing commentary on the essence of high society as a whole’, and as such is reflective of these broad anxieties about an apparently self-destructive section of society.6