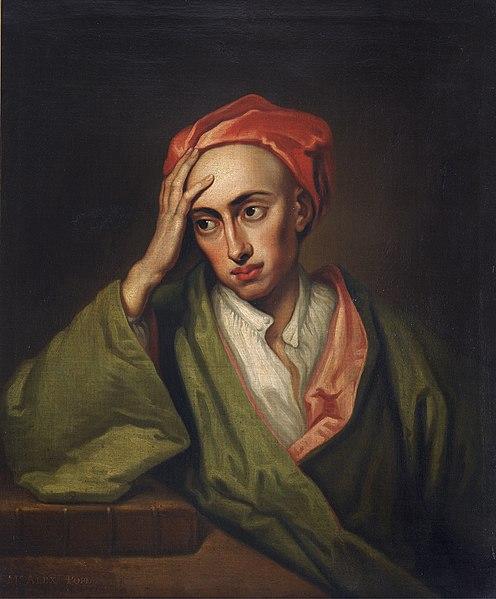 As the most celebrated British poet of the early eighteenth century, Alexander Pope (1688-1744) was a highly influential figure in the formation and articulation of sociable ideals. However, while he prided himself on his capacity for friendship, his own relationship to the social expectations of his time was far from comfortable. A disabled Catholic, who cultivated enemies just as readily and publicly as friends, he was an implausible spokesperson for polite sociability as it was generally understood by his contemporaries.

Both in financial terms and in the scale of his cultural influence, Alexander Pope was one of the most successful poets of early eighteenth-century Britain. Born into a Catholic family in the year of the Glorious Revolution, his opportunities for education and official recognition were inevitably curtailed by the era’s legal restrictions on non-Anglicans. He could not, for instance, be considered for the post of poet laureate, despite his crucial role in informing the literary tastes and stylistic conventions of his time. His poetry encompassed esteemed translations of classical works (his landmark Iliad of 1715-1720); mock-heroic ridicule of contemporary mores (1712’s The Rape of the Lock and his various editions of The Dunciad from 1728 onwards); and philosophical treatises in verse (his Essay on Man of 1733-4 perhaps being the most notable of these). Although generically eclectic, his poetic works were united by his consistent use (and mastery) of the heroic couplet: a rhyming couplet in iambic pentameter which, while predating Pope as a poetic device, came to be closely associated with him and with this moment in British literary history. The formal symmetry and self-containment of Pope’s couplets belie his awkward social position. In addition to the disadvantages of his Catholicism, he also lived with severe disability from the age of twelve onwards, his growth stunted and his back hunched following a bout of what is now known as Pott’s Disease. If his literary strategies suggest an aspiration towards polite, aphoristic authority, they are at odds with the reality of Pope’s public profile. He was often caricatured as a monstrous creature, fundamentally estranged from the society he claimed to represent. And notwithstanding his various attempts to cast judgement on the venality and vulgarity of Britain’s new print marketplaces, he was inextricably tied to them, at once more indebted and more vulnerable to the fervour of public discourse than any earlier author had been.

The central contradictions of Pope’s literary career are thus closely connected to his significance within the history of sociability. On one hand, he articulated and helped to shape the key sociable tenets of his age. He advocated for virtuous, moral friendship as a guiding principle in public life, and was heavily invested in presenting himself to the world as someone capable of enjoying sociability, whether in-person or through his correspondence. At the same time, he modelled a critical and frequently scandalised perspective on the inadequacies of Augustan England’s sociable customs, a perspective encouraged in part by his experience of exclusion. Legally barred from living within ten miles of the City of London, he established a home in Twickenham in 1719. This did not entail a total exile from court or from the key venues of urban leisure. On the contrary, Pope could count among his close neighbours influential figures such as the mistress of the future George II, Henrietta Howard – just one of various powerful individuals with whom he carefully cultivated friendships. But his position at one remove from the metropolis nonetheless hints at the oppositional and sceptical side of his sociable identity. Writing from Twickenham in the 1720s and 1730s, he gravitated from the light wit and delicacy of his earlier works to a generally more acerbic, more combative poetic mode. Some of his early friendships, including those with fellow ‘Scriblerians’ Jonathan Swift and John Gay, evolved into defining fixtures within his personal mythology, nourished by the authors’ shared grievances with the political establishment. Other friendships, meanwhile, degenerated into open hostility. Lady Mary Wortley Montagu, who had been one of Pope's closest allies in the 1710s, was by the 1730s being regularly attacked in his satires, and replying in kind.

Party politics certainly played an important role in the strengthening of some friendships and the decaying of others. Pope’s political allegiances were far from stable, but he had an underlying sympathy for the Tory cause, which was mostly out of favour if not treated with outright suspicion following the arrival of the Hanoverian monarchs on the British throne. Consequently, his evocations of virtuous friendship tend, either explicitly or implicitly, to be set in contrast with what he interprets as a widespread corruption of sociable values overseen by the Whig prime minister, Sir Robert Walpole. When he describes himself in one of his imitations of Horace as ‘To virtue only and her friends, a friend’, not only does Pope demonstrate the self-serving nature of his sociable ethos, applying to himself a line that Horace had used about a separate figure, but he also contributes to a sense of oppositional solidarity, friendship as a touchstone for political legitimacy.1  Such attachment to the ideal of moral friendship should also be understood in the context of a number of social connections which threatened to expose Pope to political or legal difficulty. He was a regular correspondent and warm confidant of Francis Atterbury, the Bishop of Rochester, who was arrested in 1721 for his role in a Jacobite plot and from 1723 was banished from Britain for life. Pope also revered the Jacobite figurehead, Henry St John, Viscount Bolingbroke, both during the years of his exile from Britain (1715-1723) and after his return. Bolingbroke and his ideas (both constitutional and philosophical) feature prominently in Pope’s poetry of the 1730s, and he was the dedicatee of the Essay on Man as well as one of the Horatian epistles. In the words of Brean Hammond, Pope saw Bolingbroke as ‘an otherworldly and superior form of life, scarcely a human being at all’.2  Operating at such an intense and idealised register, Pope’s friendships could, at least in theory, sidestep political controversy. Of course, in practice, the poet’s every assertion of disinterested admiration or politically neutral comradeship constituted a further provocation for his many enemies.

It is striking how frequently and with what fervour Pope was attacked for his unsociability, presumably due to the high premium he so publicly placed upon the opposite. Responding to his mockery of them in the first Horatian imitation, Wortley Montagu and her ally Lord Hervey describe Pope as ‘No more for loving made than to be loved’.3  Elsewhere in their Verses Address’d to the Imitator (1733), he is presented as a vile, subhuman fiend, unfit for polite society and likewise unfit to emulate Horace’s poetic authority:

Horace can laugh, is delicate, is clear;

You, only coarsely rail, or darkly sneer:

His Style is elegant, his Diction pure,

Whilst none thy crabbed Numbers can endure;

Hard as thy Heart, and as thy Birth obscure. (Wortley Montagu and Hervey 4)

These lines epitomise Pope’s propensity to ignite broader debates about the nature of politeness and the value of sociability at this time. He offers a double provocation to Wortley Montagu and Hervey, both by asserting a claim to wit despite relatively humble origins, and by coarsening the legacy of Horatian satire, tarnishing it with an unfriendly, inalienable anger. The irony, of course, is that even while pitching for the moral high ground, Pope’s antagonists cannot help making their own rage visible, and so while fixating on the importance of such qualities as delicacy, elegance and open-heartedness, they join Pope in promoting a literary marketplace built on quite contrary principles. Indeed, it would be a mistake to identify either Pope or his many foes as being consistent defenders of sociable virtue. Notwithstanding his cultivation of an idealistically sociable identity, Pope was perfectly capable of playing the villain when it suited him. Such incidents as his poisoning of the pirate bookseller Edmund Curll in 1716 – and his own subsequent publicising of the act in print – remind us that the nurturing of enmities always played just as vital a role in Pope’s self-fashioning as did the language of friendship.4

Besides the political contexts for Pope’s alternately congenial and abrasive public persona, his contradictory attitudes towards sociability also seem to have stemmed from particular anxieties about manliness and sexual capacity. In a number of his acclaimed earlier works, he aligns himself with oppressed female figures, or implies that he possesses special insight into the kinds of social challenge experienced by women in his own time and throughout history. His Eloisa, the speaker in 1717’s Eloisa to Abelard, yearns for her cruelly castrated lover while confined to a twelfth-century convent, and ends her soliloquy by communing across the centuries with Pope himself: ‘some future Bard […] / who loves so long, so well’.5  And in The Rape of the Lock, although deriding a social world which would prioritise the theft of a lock of hair over and above more substantial injuries, Pope dedicates himself to the mythologising of sociable trivialities – the game of cards, the effects of spleen – with at least some respect for how such concerns inform and limit the lived experience of young women in early eighteenth-century Britain. The attention that he ultimately gives both to his homosocial networks and his literary quarrels might be intended, in part, to remedy such associations with femininity. The same might also be said of the various misogynistic sentiments that emerge throughout his oeuvre. Pope never married, despite sustaining some long and close friendships with women. The relationships that played the most conspicuous role in his authorial practice and public self-representation were his collaborations with other men, but these sometimes assumed symbolic value disproportionate to their practical substance. The famed Scriblerus Club is a case in point. The club itself met in person only for a few months in 1714. It survived thereafter through epistolary correspondence and joint projects such as the Swift-Pope Miscellanies of 1728-32. However, it is hard to escape the impression that Pope was more invested in an enduring Scriblerian identity than others were, and that their few mutual ventures into print came about less through the meeting of kindred spirits than in a faltering attempt to build a satirical brand.6

Pope’s impact on sociable thought and practice can be observed through the rest of the long eighteenth century, in his poetry’s quotability and in lingering doubts about the social acceptability of him and his works. Jane Austen encapsulates both sides of his legacy in her scattered references to him. In Persuasion (1818), the morally suspect Mr Elliot hints at his own manipulative attitude towards sociability by rejecting one of Pope’s most renowned precepts: ‘a little learning is by no means a dangerous thing in good company’, he instructs the novel’s heroine, Anne. But if this moment demonstrates the lasting social currency of Pope’s advice, and the danger involved in flouting it, Austen is also aware of the poet as a less than respectable font of wisdom. With tongue firmly in cheek, Elinor Dashwood of Sense and Sensibility (1811) congratulates her sister Marianne on her beloved’s literary tastes:

You know what he thinks of Cowper and Scott; you are certain of his estimating their beauties as he ought, and you have received every assurance of his admiring Pope no more than is proper.

As it transpires, such equivocation about the virtues of Pope’s poetry will be no guarantee of Marianne’s romantic fulfilment. Nonetheless, the business of admiring Pope enough – but not too much – clearly remained a complicated social negotiation well beyond the poet’s own lifetime.