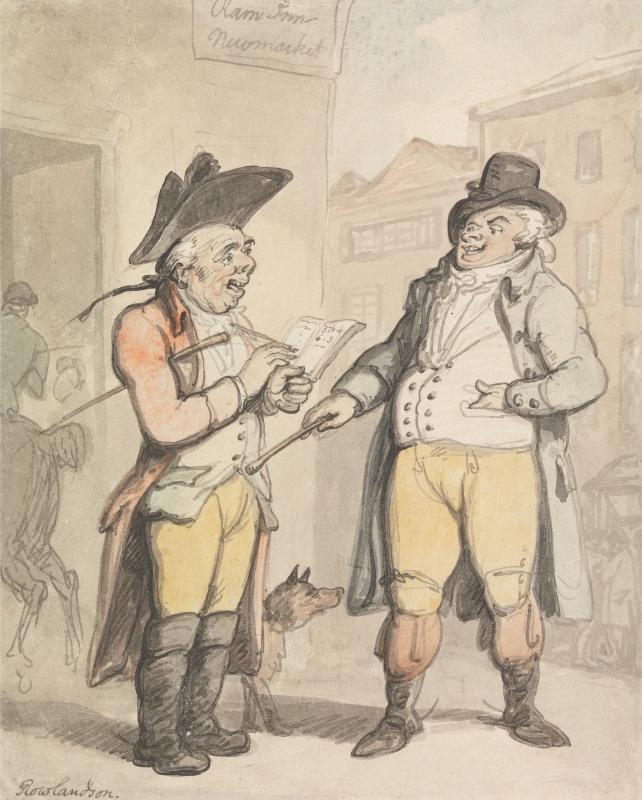 Horse racing had a prominent place amongst the new forms of human sociability and fields of practice developing in the long eighteenth century. From the 1500s onwards some town-organised meetings already existed alongside private races on local moors, downs or floodplains.1  Meeting numbers grew with the Stuarts’ love of the sport. Over the 1700s horse racing became by far the best-organized, best-supported, most high-status, best-publicized and increasingly commercial sporting activity across England and parts of Scotland and Wales. In many towns the ‘Race Week’ became a destination event in the annual recreational cycle. In Ireland racing expanded steadily from the mid-eighteenth century, consolidating and maturing to become ‘the island’s best organised sport’.2  English-style racing could also be found in America, France and elsewhere.

Although racing was the period’s most important sport, until recently general historians have largely ignored its social and cultural place in Britain. Peter Borsay’s 1989 initial study was not pursued. Non-academic historiographic focus was largely on royal and aristocratic patronage and Newmarket racing. Recent revisionist studies have stressed wider social participation and much more geographic diversity, and the varied opportunities racing gave for sociability, gambling, and its complex inter-connections with political life.3  Study of the thoroughbred racehorse, itself a key cultural icon, with rare exceptions such as the works of Donna Landry or Richard Nash, has yet to draw on the theoretical approaches of historical animal studies.4

Newmarket was a gravitational centre of royal political power and courtly leisure following the Restoration of Charles II, and by the early 1700s a predominantly Protestant Whig racing focus for the newly-founded Jockey Club, the earliest of several subsequent racing clubs.5  Racing gained support from King William, and then Queen Anne, who founded Ascot. The Germanic Georges were less enthusiastic about English racing, but both William Augustus, Duke of Cumberland, and the future King George IV indulged in and promoted the sport.

At Newmarket the Jockey Club established a dominant role. Many of its races were high-stakes matches made between two wealthy owners. Such wagers potentially combined racing rivalries, power politics, social rank, informed sociability, and the social display of the match-maker’s prowess, wealth, status and masculinity, as he demonstrated his judgement about the horse’s qualities relative to the one he had chosen to match it against. Not all of them were honest. When Daniel Defoe visited in the 1720s, he was shocked at the way the nobility and gentry were ‘busy in what is called the sharping part of the sport, of wagers and bets’, trying to ‘circumvent one another and […] pick one another’s pockets […] to the indelible shame of men of rank and quality’.6

By 1739 a contemporary racing calendar listed a network of 138 separate race meetings, with others too low in status to note.7  Governmental anxieties about the supposed excessive increase of horse races which supposedly encouraged ‘idleness’, less socially worthy activities and absenteeism, the cheating and gambling racing could encourage, and other social, economic and military concerns, led to a draconian Act of 1740.8  Each race, with very rare exceptions, had to have prize money of at least £50. It reduced races immediately as few races then offered such levels.

Even Newmarket struggled in the 1740s, but it steadily revived as a key racecourse. By 1768 the dukes of Grafton, Ancaster, Kingston, Bridgwater, and Northumberland, the Marquess of Rockingham, the earls of Eglinton, March, Orford, and Gower, and at least six other gentlemen all had racing stables there, with others run by grooms. Five noblemen and gentlemen had stables in the country nearby. By the following year the town had six race meetings: a total of thirty-nine days racing.9

Elsewhere, when race numbers revived slowly in the 1750s, most English races were for older horses, in heats, often over four miles. In heat races, the winner usually had to win two heats, with rests between. This allowed towns if necessary to have only a single race daily, since several horses might each win a heat in turn.  Other races were single ones for plates, cups or cash. Thereafter, ‘sweepstake’ races grew in popularity. Any number of owners might subscribe an amount for a forthcoming race, which the winner took. It offered a far wider variety of odds and market manipulations, and made racing ever more attractive to owners and wagerers. Leading meetings could now afford two or more daily races. Over time there were also more races for three- and four-year-old horses, running at speed over shorter distances. In 1780 the first Epsom Derby, to which 36 horses had been entered the year before, was run, though only nine three-year-olds ran, giving 1,075 guineas to the winning owner.

From the 1760s many county towns like York, residential leisure towns such as Lewes or Stamford, and some market towns like Knutsford or Hexham, often enjoying periods of urban renewal by the middling sort, were more able to raise the higher prize money and extend facilities. Almost all could only support a single annual ‘race week’ of usually two to four days racing.  Such meetings took place in the period from March to October, when fashionable nobility and gentry society moved from London or town houses to enjoy county estate life and a nearby urban race meeting’s multiple leisure attractions.

Towns were well aware that a race week offered potential profit as well as recreation and diversion to many of their citizens, especially those involved in hotels, inns, taverns, other food and drink facilities, stables, smithies, farriers, entertainments, and a wide range of luxury service providers, who might all contribute to prize money subscription lists. Better urban homes might be rented out by advertising them as lodgings to more distant visitors. Depending on locality, further prize money might be raised from crown-provided ‘royal plates’ which encouraged cavalry horse breeding; borough corporations; local MPs or prospective MPs seeking political patronage, favour and support; ‘county’ aristocratic and gentry landowners; and individuals seeking status or enjoying racing. Even so the death of a major supporter, or local political, social or economic circumstances, could mean failure to raise sufficient money.

Race meetings were important social gatherings. The carnivalesque course atmosphere, concerning to some, allowed class, age, urban/rural, and gender social mixing on the course: agricultural labourers and men of fashion, noblemen and pickpockets, gentlemen of fortune and beggars, clergy and prostitutes, peeresses and kept mistresses.  Some attenders chose segregation. Carriages and other wheeled transport might line the course: there were 324 carriages at York in 1766.10  Temporary wooden ‘scaffolds’ or stands allowed a better view, and later, stone or brick-built grandstands were introduced at some courses, allowing attenders to look down on races and the common folk.11  Marquees, booths, tents and huts provided shelter from the elements, food and drink, gambling opportunities and sometimes sex.  As Oliver Cox has shown, racing was then recognised by contemporaries as an essential part of the structure of politics, at national, regional and local levels.12  Races offered an opportunity for the local elites to network politically, assessing electoral support through covert Whig and Tory political operations, or around 1745 occasionally providing a context for gatherings of pro-Jacobite gentry as at Lichfield.

Gambling was closely integrated into elite sociability, and wagering on the course offered great opportunities.  Much wagering took place around a so-called ‘betting post’, with known acquaintances, offering and accepting odds and amounts staked, noting them in memorandum books, and settling them at a later time. But regular owners and gamblers wanted to increase the size of the betting market. Plebeian groups of working-class ‘blacklegs’, racecourse gamblers often with carefully practised external appearances, aping civility and politeness, were soon also involved, like some wealthy racing insiders drawing on the new more sophisticated knowledge of probability, hedging bets, and copying tactics in contemporary financial markets. High-staking elite gamblers could be vulnerable. Avoiding dishonesty helped shape the sports rules and behaviours.  Getting one over on the opposition sometimes led to accusations that owners, grooms, jockeys or trainers, of whatever social background, might have a horse held back or use of the dark arts of overfeeding, giving too much water or other forms of ‘nobbling’. Opponents of racing, such as evangelical Protestants and social reformers, saw Newmarket as a site that encouraged vice, corruption and dissipation amongst the elite, while more generally racing encouraged working-class idleness, drinking, gambling and potential dishonesty.

Ante-post betting on major races and high-stakes matches grew over time, encouraged by the elite associability of London clubs, coffee houses or betting houses like Tattersall’s Turf Tavern, and from late in the century, the emergence of professional bookmakers. Thomas Rowlandson’s picture of a bookmaker and his client outside the Ram Inn at Newmarket illustrates the social context of such pre-match arrangement.

Wagers could be substantial. The match between Sir Henry Vane Tempest’s Hambletonian and the wealthy London-based owner Joseph Cookson’s Diamond, another leading horse of its day, on Newmarket Heath in March 1799 over a distance of just over four miles for £3000 a side attracted perhaps 300,000 guineas in reported wagers.

Opportunities for sociability spread far wider than the course. In the days before the races, arriving horses exercising on the course might be watched and assessed. Elegant assembly rooms opened for the week, allowing men and women of prosperous and socially-ambitious mercantile and professional families to mix with the landed elite. Innkeepers, key cultural entrepreneurs for racing, might offer, at a price, social dining together at morning ‘ordinaries’. Some towns offered balls, a touring comedy or theatrical group, or musical concerts. Various sports might be on offer. Racing calendars often listed cock-fighting taking place alongside races, as at York until at least the 1780s. At Carlisle there was sometimes Cumberland and Westmorland wrestling. There might also be hunting arranged during the week. Some elite women raced their own horses. Some took sufficient interest in the racing to place bets. As more elite women attended meetings, first in carriages and then on the scaffolds and more expensive grandstands, they were joined by larger numbers of middling women, especially when booths’ stands became reserved for women. Women's letters back to friends and relatives about their visits were full of accounts of race-week events and experiences: balls and assemblies, political and social gossip, who they met, and the races themselves. The many prizes advertised as a ‘Ladies’ Purse’ or ‘Ladies’ Plate’ during the period were recognitions of the importance of their presence.

In conclusion, horse racing was a social phenomenon and commercialised leisure industry that sheds much light on a wide range of social, cultural, political and economic developments. Operating as meetings did on a liminal continuum between urban and rural life and between public and private, they allowed a tacitly-controlled cross-class mixing articulating vertical ties that united rich, middling and poor followers, and built on time-honoured traditions of carnival-related festivity, while also allowing a substantial element of social selectivity in contexts such as the permanent grandstands or the assembly rooms. By 1809 the Morning Chronicle could express an increasingly commonly-held view that horse racing was the British people’s ‘ancient, authorized and national sport’.13