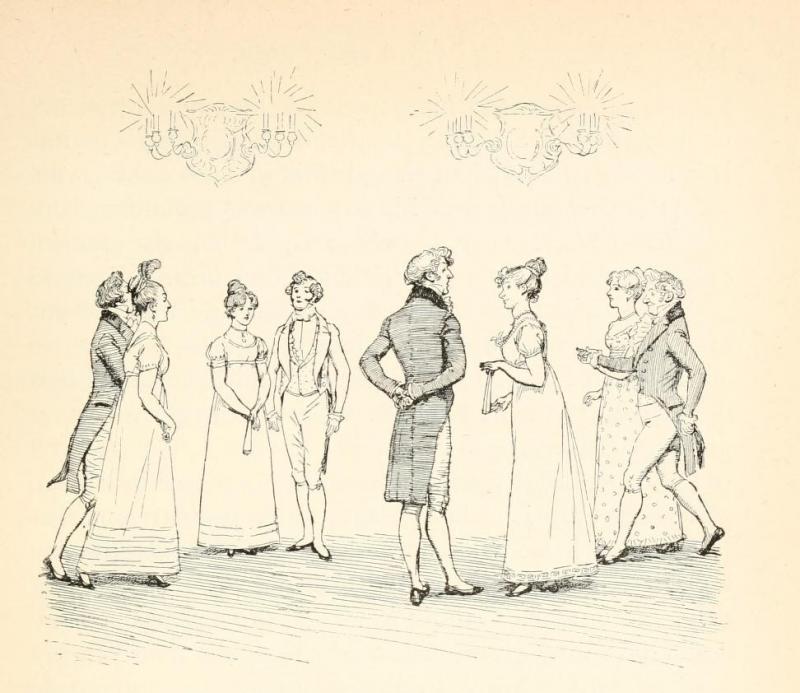 As a novelist of manners and an acute observer of human interactions, Jane Austen analysed the implications of late Georgian and Regency sociability with regard to gender and social rank. Critiquing earlier notions of polite sociability, her fictions recognise new sites of provincial recreation and explore the intersection between sociability and courtship while also probing sociability’s power to unify communities. Finally, Austen’s legacy has catalysed modern sociability through clubs and societies dedicated to her work and amongst new communities emerging in the digital realm.

Jane Austen’s early life, growing up in her father’s country parsonage in Hampshire in a family of clever siblings, featured the kind of domestic sociability which is central to her fiction.1 A culture of shared creativity involving word games, stories and home theatricals developed into the boisterous satire of Austen’s teenage writings and informs the more sophisticated social play of her mature novels, most particularly Emma (1815). Socially, the Austens were on the margins of the gentry class, with limited income but benefitting from a wide network of family connections.2 Country balls amongst her Hampshire neighbours widened Austen’s experience at the same time while making evident disparities in social position, particularly for a young woman with little money. Where her fictional heroines find husbands amongst their dancing partners, Austen herself remained single: a circumstance which left her financially precarious but probably facilitated her writing career. She lived within a close circle of female relations and friends who read, responded to and encouraged the progress of her six completed novels. Although she published anonymously – her first novel Sense and Sensibility (1811) was ‘By a Lady’ – Austen engaged in a distanced form of literary sociability; her name appears in the subscription list for Frances Burney’s novel Camilla (1796), and her authorial persona in Northanger Abbey (1817) appeals for common cause amongst fellow (mainly female) novelists to ‘not desert one another; we are an injured body. Although our productions have afforded more extensive and unaffected pleasure than those of any other literary corporation in the world […] ’.3 Austen’s correspondence also shows that she mentored her niece’s early efforts as a novelist.4

Despite the social and economic limitations which circumscribed her independence as a single woman, Austen took advantage of opportunities to observe the changing world around her. She resided five years in the fashionable spa town of Bath when her father retired there in 1801 and partook of the town’s public diversions, which are depicted in her fiction. She also visited London on numerous occasions, attending the theatre and notably seeing her novels through the press. Her brother Edward Austen-Knight’s adoption by wealthy cousins and eventual inheritance of their estates enabled his sister to move amongst the landed gentry and observe them at close hand; she also accompanied him to Bath where he tried the latest treatments for his gout. Austen’s fragmentary final novel ‘Sanditon’, set in a newly established coastal resort, begins as a promising exploration of the close alliance between sociable practices and the treatment of illness: a narrative which was cut short by her own early death at the age of 41 in 1817.5

Sociability in the novels

Austen’s principal focus in the novels is on provincial rather than metropolitan sociability, which by the early nineteenth century had come to be associated with sterile politeness and corrupt morality. In a country neighbourhood or a ‘large and prosperous village’ like Emma’s Highbury, visiting between neighbours provided a basis for social cohesion.6 Austen’s protagonists assemble for house parties and impromptu country dances in the domestic space of private homes, although they are also drawn to the new venues for sociability in provincial towns. Catherine Morland, the inexperienced heroine of Northanger Abbey, is initiated along with the reader into the daily social rituals of the town of Bath, that ‘laboratory of Georgian sociability’ which accommodated a large population of seasonal visitors while remaining intimate enough to allow for social mixing in its public venues.7 Catherine attempts to locate her own place in the social order as she negotiates her way through the crowds at the Pump Room, the Assembly Rooms and the theatre, where playgoers are as much spectators of each other as of the play. Commercial spaces of the new leisure economy, like circulating libraries and retail premises, also serve as sites for social intercourse and recreation in the novels: Ford’s general store in Emma, for example, is ‘the very shop that every body attends every day of their lives’, making it the ideal locus for the exchange of news and gossip (Emma, II.vi.215).8 Austen’s marriage plots pivot around episodes of sociability for which romantic love is the energising force. The arrival into the community of ‘a single man in possession of a good fortune’ signals opportunities for both sociability and courtship.9 Austen seems to have been particularly interested in exploring the dilemmas created by this interpolation of the private into the public space; for while respectable courtship was conducted openly under the surveillance of the social group, the expression of real affection and desire required private communication. Covert affairs, like that of Jane Fairfax and Frank Churchill in Emma, are seen to destabilise the community until they can be openly acknowledged. Ideally, the ‘little social commonwealth’ of an Uppercross or a Meryton provided a degree of communal supervision over courtship, but Austen suggests that in an increasingly mobile population sociability offered only limited protection from the threat of predatory incomers; the superficial charms of a Willoughby, Wickham or the Crawfords, who excel in the rhetoric and performance of polite sociability, deceive not only their potential lovers but the whole neighbourhood.10

Balls in Austen’s novels serve as important occasions for staging social hierarchies and conducting courtship. Public assemblies, like the opening ball at Meryton in Pride and Prejudice (1813), were organised by subscription and offered opportunities for interaction between social ranks if the local landowner, or a visiting one like Mr Darcy, chose to attend (Russel 184). Despite being governed by strict conventions, dancing was an erotically charged form of embodied sociability. For both sexes the ball represented the culmination of dancing lessons and long rehearsed social skills combining self-presentation with performance. A young lady’s first ball signalled her eligibility for marriage: that she was ‘out’. Even Fanny Price, the socially marginalised heroine of Mansfield Park (1814) is found anxiously practicing her steps before her first ball. While spectators watched, dancers sized up partners for their marital suitability.11 Henry Tilney’s analogy of ‘a country-dance as an emblem of marriage’ makes this plain; yet he also sums up the unequal power dynamic inherent in the dance of courtship: for as in marriage as at a ball, ‘man has the advantage of choice, woman only the power of refusal’ (NA, I.x.74). The young lady who turns down a potential partner, as Elizabeth Bennet might willingly have declined Mr Collins’ unappealing offer, must sit out the rest of the dancing.

Despite the witty repartee of Austen’s dialogues, the novels move away from conversation as the principal paradigm governing British sociability and suggest a new, morally informed mode of social interaction. Anne Elliot, the heroine of Persuasion (1817), explains that her ‘idea of good company’ is that of ‘clever, well-informed people, who have a great deal of conversation’ (Persuasion, II.iv.162); but words alone are shown to be insufficient. For Austen’s central protagonists, true sociability is expressed not in the polite language and manners of earlier models of social intercourse but demonstrated through meaningful acts of consideration towards others. Elinor’s patient attentions to the vulgar but kindly Mrs Jennings in Sense and Sensibility, Captain Wentworth’s wordless handing into the carriage of a fatigued and forgotten Anne Elliott in Persuasion, Mr Knightley’s choosing to dance with Harriet when she has been snubbed by the ‘gallant’ Mr Elton in Emma are empathetic acts which contrast favourably with the French-inflected volubility of smooth talkers like Frank Churchill, whom Mr Knightley determines ‘can be amiable only in French, not in English’: ‘He may be very “aimable,” have very good manners, and be very agreeable; but he can have no English delicacy towards the feelings of other people’ (Emma.I.xviii.160-1).12 Austen’s proposed counter-model of British sociability reinforces perceived notions of national difference in sensibilities and modes of expression emerging during and in the aftermath of the Napoleonic Wars.

While probing sociability’s complexities, the novels also reflect wider developments taking place in the organisation of the social sphere. Austen registers approval through her characters of the expanding participation of new classes into provincial sociability. Darcy comes to love Elizabeth’s aunt and uncle Mr Gardiner, who ‘lived by trade, and within view of his own warehouses’;13 Emma learns to accept into her social circle the 'arriviste' Coles with their commercial background, and in Persuasion, Austen’s final completed novel, the propertied elite, represented by the Elliots and the Dalrymples, retreat entirely from the scene of public sociability into their private drawing rooms to be replaced by the convivial fellowship of the naval officers returned home from the Napoleonic wars: men who represent a new and worthier merit-based social order (Cossic-Péricarpin, 545).

Over the course of the last two centuries, Austen and her works have fostered novel and inventive forms of sociability. In her own lifetime and into the late nineteenth century, the novels were read aloud and discussed in family groups like her own, with allusions to her writings serving as cultural currency amongst elite groups. But succeeding generations of readers have held Austen’s characters and the author herself in such familiar affection that a popular cult of Austenolotry grew up around her fictions.14

From the mid-twentieth century, literary societies and clubs devoted to Austen were founded across the English-speaking world: associations like the Jane Austen Society of North America (JASNA), which not only discuss her works and hold regular literary conferences but re-invent through costumed re-enactment social rituals based on the novels. More recently, the virtual realm of the internet has generated new and unexpected sites for sociability, which in turn are mediated by their own forms of politeness;15  millennial Janeites exchange Austen memes and create fan fictions based on the novels, and fora such as the Republic of Pemberley and JASNA bring critical and popular appreciation of Austen’s works into productive discourse.