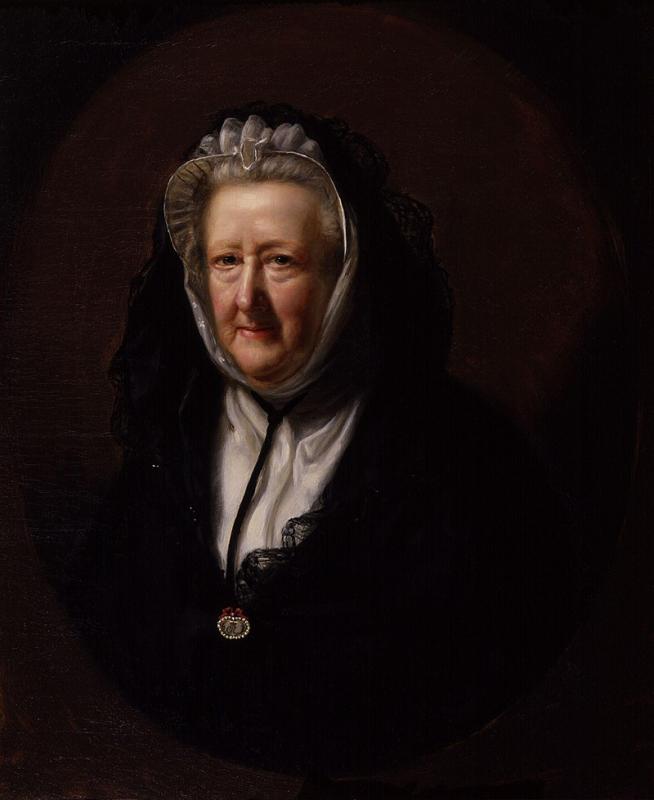 Mary Delany (1700-1788) has remained famous for her correspondence and her flower collages. Her life also provides a perfect illustration of a woman seeking participation to collective activity and court, all the while relying on her sense of propriety to adapt to new sociable circles or to organize her own assemblies.

Mary Delany (1700-1788) was born Mary Granville and educated so as to become a Lady of the Bedchamber. However, at the age of seventeen, she was married to Alexander Pendarves who took her to his solitary castle of Roscrow in Cornwall where she was kept out of most sociable meetings. In the last years of her husband’s life, she was back in London and managed to regain several social contacts which she was to seek for the rest of her life, while a widow (1724-1743), when married to her second husband, Patrick Delany (1743-1768) and in the last twenty years of her life when she was a widow again (1768-1788).

Although her education and upbringing led her to keep a deep sense of propriety throughout her life, it was perhaps not in keeping with the most formal sociable activities which she still tasted more often than not.

From 1731, the widow Pendarves, desirous to take her distance from England and her many suitors there among whom Charles Wesley, left for Ireland where she attended several literary salons: "I have just began an acquaintance among the wits – Mrs Grierson, Mrs Sycon and Mrs Pilkington; the latter is a bosom friend of Dean Swift’s, and I hope among them I shall be able to pick up some entertainment."1 In the following months, she repeatedly spent some time with Jonathan Swift at his friend and biographer’s, Patrick Delany. At the time, following Hesther Johnson (Stella)’s death, the Dean of Saint Patrick’s Cathedral was often surrounded by Frances Kelly, John Boyle, fifth Earl of Orrery, the Donnellans and the actor Thomas Sheridan. The young Mary Pendarves accounts for her first visit in the following words on 24 January 1733: "We are initiated of that witty club, and Thursday is the day of meeting" (Newport 1: 83). Although several gatherings had to be cancelled because of Swift’s health, they were still regular in March and April 1733, so that Mary Pendarves started to enjoy them in spite of Swift’s manners: "Swift is a very odd companion (if that expression is not too familiar for so extraordinary a genius); he talks a great deal and does not require many answers; he has infinite spirits, and says abundance of good things in his common way of discourse" (Newport 1: 83); "The day before we came out of town, we dined at Doctor Delany’s, and met the usual company. The Dean of St. Patrick’s was there, in very good humour, he calls himself ‘my master,’ and corrects me when I speak bad English, or do not pronounce my words distinctly. I wish he lived in England, I should not only have a great deal of entertainment from him, but improvement" (Newport 1: 88). Two years after leaving Ireland, she still missed those weekly meetings and expressed it in her prolonged correspondence with Swift.2

In the following years, in England, Mary and her sister Ann met regularly with the Wesley brothers, John and Charles, in sociable meetings mainly based on polite conversation and possibly also on a degree of courtship that led them to invent nicknames for each of them. In 1744, she attended an “assembly” held by the diplomat Luke Schaub in London3 ; her exchanges with Eleanor Butler suggest a degree of involvement in the circle of the ladies of Llangollen.4  More regularly still, she attended the salons of Elizabeth Montagu, Elizabeth Vesey and Hester Chapone, meeting several famous writers, including Henrietta Bowdler, Catherine Dashwood, Catherine Macauley, James Beattie, James Boswell, Jacob Bryant, David Garrick, Soames Jenyns and Richard Brinsley Sheridan.

She also invited many literati to her place even though other assemblies she organised seem to have been less literary.5  In 1754, Elizabeth Montagu and Catherine Talbot came regularly. From 1773 to 1782, she gathered what she repeatedly called “little circles” to which came Elizabeth Vesey, Frances Boscawen and the Duchess of Portland. In 1782, the number and celebrity of her guests led her to neglect Hannah More’s conversation, which she soon afterwards apologized for in a letter: "I hope you have not suffered from the pleasure you bestowed on me last Saturday. I was sorry my circle enlarged, as it prevented my enjoying your conversation as much as I wished to do."6  Usually organised from January to April, when she was in London,7  those assemblies gathered men and women of letters, noble friends and relatives every fortnight (on 2, 15 and 29 April 1776 for instance). Thus she had her salon in London as well as Hester Chapone, Elizabeth Montagu and Elizabeth Vesey.8

Mary Delany’s name is sometimes associated with the Bluestocking circle9  whose members met from 1756 till 1788 at Elizabeth Vesey’s, Elizabeth Montagu’s and Hester Boscawen’s places in order to exchange ideas. The introductory lines of Hannah More’s poem “The Bas Bleu: or, Conversation” (1787) paying homage to the movement explains it in simple words:

The following trifle owes it birth and name to the mistake of a Foreigner of Distinction, who gave the literal appellation of the Bas-bleu to a small party of friends, who had been often called, by way of pleasantry, the Blue Stockings. These little Societies have been sometimes misrepresented. They were composed of persons distinguished, in general, for their rank, talents, or respectable character, who met frequently at Mrs Vesey’s and at a few other houses, for the sole purpose of conver­sation, and were different in no respect from other parties, but that the company did not play at cards.10

Although Mary Delany’s name is not mentioned in Hannah More’s poem (neither is Hester Thrale’s even though the latter played an important part in the movement) and although the words “Bluestocking” or “Bas-bleu” never occur in her own letters, she must have attended several of the Bluestocking circle meetings. In 1769, she recalls feeling ill at ease in "a formal formidable circle" (Newport 4: 32) she had been invited to at Elizabeth Montagu’s; five years later, she is "dazzled with the brilliancy of her assembly" (Newport, 5: 16); in 1780, she describes “a circle of superior spirits, feeding their own mortal part with an excellent breakfast, and feasting their hearers with the flow of sense!”, naming Leonard Smelt and his wife, Elizabeth Carter and Hester Chapone. Moreover, the special links she had with Frances Boscawen, Elizabeth Montagu and Elizabeth Vesey make it very unlikely that she could have been kept away from the Bluestockings. As early as in 1754, she invited Elizabeth Montagu, Catherine Talbot and Elizabeth Foley to her place; she spent entire days with Elizabeth Montagu and Elizabeth Carter in 1769, sharing their taste for conversation,11  good meals, gardens and domestic qualities;12  and her views on marriage, card games and politics echo those of the bluestockings.

Mary Delany eventually gained access to the court of King George III and Queen Charlotte, experimenting two very different forms of court sociability, the one from the outside, the other from the inside.13

From 1768 to 1785, while settled in London, she spent several months, each year at Bulstrode, the residence of her great friend Margaret Cavendish-Bentinck, Duchess of Portland. Living with the nobility and sharing the daily company and activity of her friend, Mary Delany was granted access to numerous visits, dinners, large assemblies or more private meetings in a world where sociability, for women, was very often associated with literature, music and science. With the Duchess of Portland, she met authors, musicians, botanists but also the King and Queen who occasionally visited the Duchess at Bulstrode or invited her to come to the Court. Thus she was one of the ladies at the King’s levee in 1773 (Llanover 4: 521). Gradually, Mary Delany’s taste, talent and rigor for “flower collages” in particular got her the attention of the Royal couple in a more personal way and led to a royal favor.14

When the Duchess died in 1785, Mary Delany was offered a royal pension and an apartment at court in which she spent many months from 1785 to 1788, while keeping her house near Saint James’s Place. To her, court sociability now became perceived from the inside: the public dimension of her contacts with the royal family turned private, since the Royal couple occasionally stepped into her door, while she spent evenings with the Queen, Royal Princesses and King.

I have been several evenings at the Queen's Lodge, with no other company but their own most lovely family. They sit round a large table, on which are books, work, pencils, and paper. The Queen has the goodness to make me sit down next to her ; and delights me with her conversation, which is informing, elegant, and pleasing, beyond description ; whilst the younger part of the family are drawing and working, &c. &c., the beautiful babe, Princess Amelia, bearing her part in the entertainment ; sometimes in one of her sister's laps ; sometimes playing with the King on the carpet ; which, altogether, exhibits such a delightful scene, as would require an Addison's pen, or a Vandyke's pencil, to do justice to it (Llanover, VI, 328).

And yet, she still kept a sense of the etiquette in all situations, and did her best to teach it to her protegee, Frances Burney, whom her father had asked Mary Delany to introduce at court.

Mary Delany died in April 1788, having experienced all the levels of sociability she had yearned for or been educated to yearn for in her youth. Very often present but rarely in the limelight, Mary Delany was a very sociable being, abiding by the rules of propriety in all cases and places. Since it originates in her letters, this image may have been a self-construction, by the letter writer, of her own persona. However, it was confirmed by many onlookers of the period who not only attended the same sociable gatherings but also commented on Mary Delany’s part in them.

Clark, Peter. Sociability and Urbanity: Clubs and Societies in the Eighteenth-Century City (Leicester: U of Leicester, 1986).

Mullan, John. Sentiment and Sociability: The Language of Feeling in the Eighteenth Century (Oxford: Clarendon, 1988).